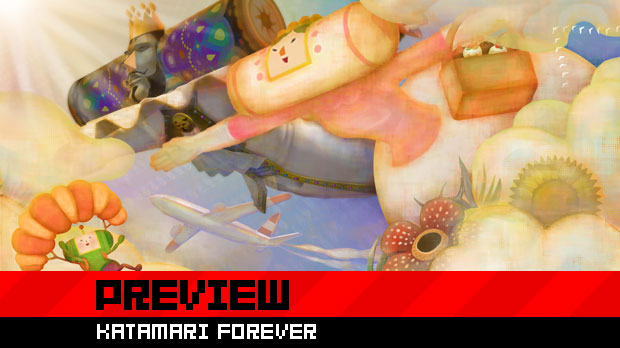 I tried to put something in the title about the upcoming Katamari Forever being a PlayStation 3 exclusive, and that in in being an exclusive it is making me slooowly come around to considering getting a PS3. But our character limit in titles won’t let me.

So, the newest Katamari game is a PS3 exclusive. I do not have a PS3 nor want one. I want the new Katamari Forever game, though, so I think I may have a problem.

Find out why after the jump.

So a long time ago, in a console generation previous to this one, I had personally grown tired of the all the mainstream types of games that were glutting the PS2 and its contemporaries. Not to say that there weren’t titles out there that weren’t fun and original for the three systems of the day — it’s just that there weren’t enough of them. I was bored with gaming as a whole, and it stayed that way for quite some time.

Later, and much to my surprise, the one console that seemed to be the most responsible for the slew of Legacy of Kain-3rd-person-whatever-rip-offs — the PS2 — had suddenly become the system of new and interesting titles. As you you know, titles like God of War took the system to new heights of popularity, but there was one game that I spent hours playing that helped to get me back into gaming. Yup, it was Katamari Damacy.

The simplistic yet challenging gameplay, the bizarre characters and concept, and the intentionally quirky and over-the-top cuteness of the graphics all won me over as I pushed the Shrimpy Prince’s Katamari through world after world in an effort to appease his psychotic father. Katamari Damacy was a game that I could, and still, play for hours on end. I was hooked on the game from the get-go, but as the series continued, I felt that it lost a lot of what made the first one so special.

Don’t get me wrong, I liked We <3 Katamari as much as the next bloke, but it didn’t have the same pizazz its predecessor did (mostly just oddly placed loading screens). I never owned a PSP to play that system’s version, and as excited as I was for the Xbox 360-exclusive Beautiful Katamari, it eventually let me down with its hollowed-out feeling.

Which brings us now to the newest entry in the series, Katamari Forever. I’m not about to go all head-over-heels for the title just yet, but from what we were shown, and what we were told, there just may be hope for my beloved series.

Katamari Forever returns to the roots of the originals — not only as a new iteration in the series, but also a tribute to the things that fans loved before. Even though players will get new levels displayed in awesome 1080p, they will also get to play familiar levels from previous games with the updated Forever touch. Remember the ginger bread house? It’s in there.

Looking absolutely fantastic on the PS3, the world of Katamari comes to life in a way that just wasn’t present in the Xbox 360 version. Everything on screen is just bursting with color all over, and the 1080p resolution makes a real difference in its presentation. I know that the original PS2 series were supposed to be low-budget fun, but seeing what the Katamari world looks like in HD done right is a treat and half.

The insanity of the series seems to have returned in full effect with the latest story. The King of the Universe has apparently lost his memory, and his head, and it’s the Shrimpy Prince’s mission to rectify both issues. While that sounds like it may be on par with all the title’s wackiness, it does go far in showing me that Namco is doing more to represent what made the original special, aside from the straightforward “roll shit up into a ball” mentality of Beautiful Katamari.

Along with there being the new graphic filters to play the game in, we caught on to a few of the new play mechanics during the demo. Apparently, using the SIXAXIS controller allows you to jump. That’s new! And the there’s also a level that was called the “sprinkler level,” where the Katamari is used to spread water all over the colorless level to bring back its greenery and fauna instead of just rolling things up into a ball. There was also mention of special items that are found in the levels that act like power-ups, giving the game a bit more strategy than before.

So, it looks like I may be excited for another Katamari game again. While we didn’t see everything there was to see, what we saw, I liked. As we get closer to the game’s release date this Fall, we’ll hopefully have more time to spend with the title. In the meantime, though, it looks as if the title is on the right track for fans of the series. But like I said, we’ll see.

If Namco does come through on this, and it looks like they may (fingers crossed), I might need to come over to your house and borrow your PS3. That’s cool, right? Hello?