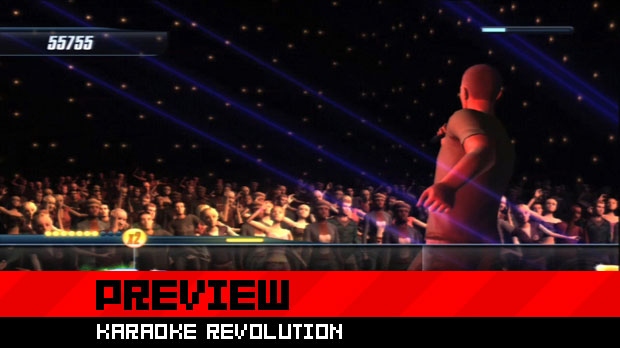 Karaoke is serious business around Destructoid headquarters. Don’t believe me? We have video proof that we don’t mess around when it comes to the fine-art of the instrumental sing-a-long.

Konami has long brought karaoke to the videogame space, starting in 2003 with the PlayStation 2 release of Karaoke Revolution. In 2009, Konami is getting serious with an update to the series. One look at the new logo — a sleeker, more space-aged take on the words “karaoke” and revolution” (which you can see here) — makes this very clear.

Hit the jump to learn about the newer, more cereal Karaoke Revolution that Konami will be bringing to retail later this year.

With the series arguably waning in quality since the first release in 2003, Konami has to do something to make the series more relevant in the space of games like Sony’s SingStar and Microsoft’s Lips. Its first order of business is taking the game “next-gen,” leaving older consoles in the dust; this new version of Karaoke Revolution will be available for the Wii, Xbox 360, and the PlayStation 3.

In the past, Karaoke Revolution has relied on re-recorded versions of popular songs, something that today would be completely unacceptable to gamers and music-enthusiasts alike. Karaoke Revolution will feature 50 brand new songs, all licensed master tracks, ranging from contemporary hits like Coldplay’s “Speed of Sound” to classic sing-a-longs like Elton John’s “Rocket Man.”

The game’s character creation has been given an upgrade as well. Gone is the big-headed, cartoony look of previous games; the game’s avatars now have a sleeker, more realistic appearance. The character creation features should be highly customizable this time around, with Konami promising facial and body morphing. Venues are even customizable as well; in addition to the ten included venues, there will be six venues that players can personalize.

Game modes emphasize party play (always Karaoke Revolution‘s greatest strength), with a Party Mode that supports up to 16 players. If you’re lonely and friendless, there’s something for you in the Career Mode, which will also be the way you’ll unlock new venues and accessories for your avatar.

Despite the fact that the game is hitting three platforms, it appears that the PS3 and Xbox 360 versions will have the fullest feature sets. Both games support system specific cameras (Xbox LIVE Vision Camera, PlayStation EyeToy), and both will support downloadable content, while the Wii version will not. Plans for additional song downloads (again, all master tracks), venues, and clothing for avatars are already being planned.

Once the masters of the rhythm game, Konami has been pushed out of the market over the course of that last few years. In a karaoke game, consistent content and presentation is key. After the abysmal reception for Rock Revolution, Konami has a lot to prove. We’ll see if they still have the chops when this new, super-serious Karaoke Revolution ships later this year.