Kart racers are perhaps the most immediately shunned genre in all of gaming. Its unpopularity only rivaled by the colossal success of the Mario Kart series. It seems that since Mario Kart’s inception, everyone else has been copying the template and received tepid results at best.

Jimmie Johnson: Anything with an Engine is the latest challenger to the throne. While it certainly copies the Mario Kart formula (a comparison the devs do not shy away from), it tweaks the how-to-make-a-kart-racer blueprint to offer people a little something different. 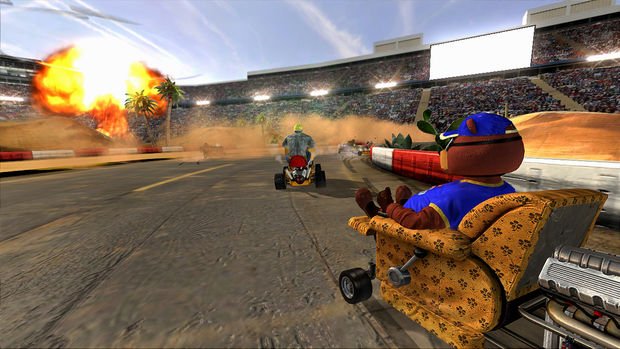 For those unfamiliar with the game’s namesake, Jimmie Johnson is a five time NASCAR champion. An avid gamer and long time Mario Kart fan, he reached out to some college buddies in the development community with the idea for the game, aiming to make an accessible racer with some added depth.

The game’s concept (and last half of the title) comes from when Jimmie was quoted saying, “I’ll race anything with an engine.” Taking this to the heart of the design decisions, the team at Isopod Labs has taken relatively everyday objects and strapped engines on them. Shopping carts, lawnmowers, and even caskets are all drivable vehicles in this game. Cars also come complete with stats, varying in the standard breakdowns of handling, speed, durability, etc. 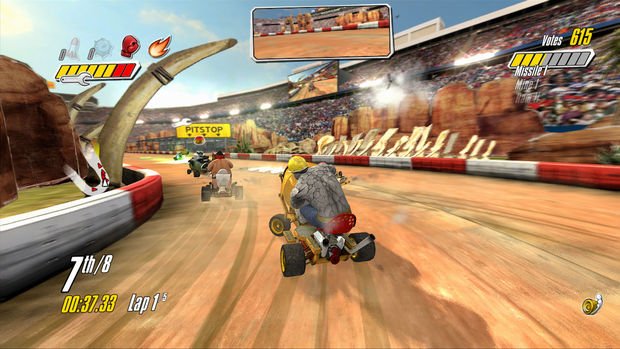 NASCAR elements also play into the racing with the inclusion of pit stops in each track. Pit stops allow players to regenerate health and stock up on weapons before heading back to the races by mashing on the triangle button (Y on Xbox 360) once you’re inside. Since health is relatively finite, pit stops are integral to the experience. Ignore them like I did and you will find yourself respawning a lot as other racers pass you by.

More than just a pretty face for the box art, Jimmie has a more active role in the game’s development. One idea that came directly from him was to mitigate rubber-banding as much as possible. If you don’t know, rubber-banding in kart racers is where players falling behind are given pretty absurd advantages and can quickly go from last to first place. In Mario Kart, for example, this can equate to leading players getting weaker weapons (such as green shells) and players trailing behind getting much more powerful weapons (red and blue shells, lightning bolts, etc.)

To curb this, Anything with an Engine handles weapons very differently. Every kart has predetermined weapons: missiles, side rams, mines, and nitro boost. The weapons may be the same for each car but the effects are different. For example, mines from one car may simply blow up when hit, while the mines of another car have a liquid effect, causing your screen to get misty as you spin out. Weapons are activated by running through glowing points on the track, much like the item boxes in Mario Kart. 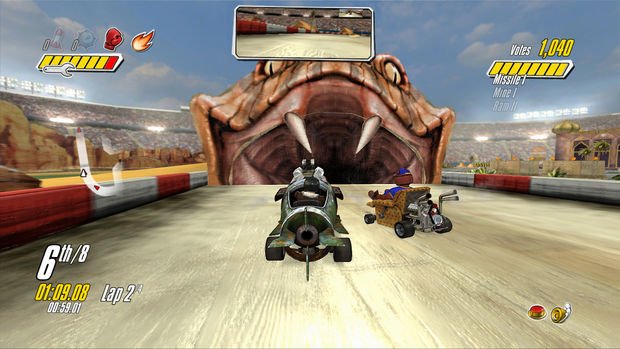 Another tool to combat rubber-banding is the game’s shortcut system. Players that fall way behind have the option to open shortcuts on the track, allowing them to catch up much more easily. It’s a crutch for lower level players that lends a hand, without directly punishing well performing players. The system worked well in our playthrough, and for additional balancing, other players can use the shortcuts that you have opened. Shortcuts only stay open for a small amount of time though, so time it right and you can have it closed off once you’re in.

Modes in Jimmie Johnson are relativity standard fare, with a few original ones for good measure. Staples like career mode (with narration from Johnson himself), time attack, and quick race are all present. The modes we got a chance to play were the Survival and Versus mode, along with a curious one called Matador.

Survival mode is one that has made an appearance in plenty of racers. Players compete to avoid last place; the player in last place getting blown up after a timer runs out. Johnson’s twist on this though has players respawning as a explosive robot chicken. Yeah. You drive around and sabotage the surviving players, specifically trying to blow them up. You have unlimited lives once you are the chicken so feel free to go crazy. A nice idea on paper, and in practice to some extent, but the inclusion of the chicken make the races end a little too early. It’s looks to be good fun for a quick fix but probably not a go-to mode for extended play. 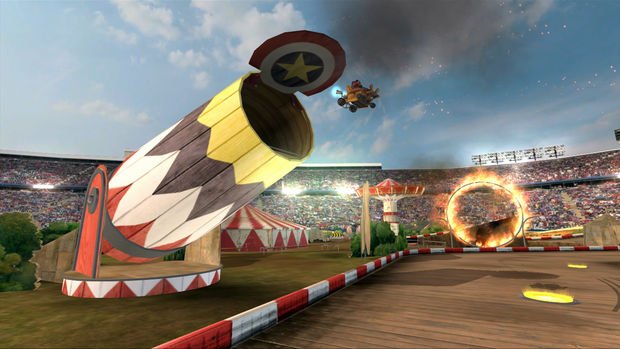 Versus mode was also fairly standard stuff. Using weapons and some wits, this mode has you vying to win the best out of three rounds by either beating the other racers to the finish line or just killing them. Since there are no pit stops in this mode there is some strategy depending on what track you play. Our track was a fairly small one so winning a round by completing the race required three laps. As it turned out, my pacifist methods led me to getting my ass handed.

Matador is a different take on standard racing. This mode has four players driving in one direction and four in the other. Its pretty goofy sounding, and it can be when racers crash into each other on the track. To an extent though, I found the matador gimmick just a bit awkward as you can never really tell how well you’re placing. There is still the notifier that lets you know what place you’re in, but since it accounts for all eight racers (not just the four driving in the same direction as you) placing well feels too random.

All these modes can be played in four player split-screen and even supports 3D displays. So while it certainly doesn’t seem like a Mario Kart killer by any stretch, kart racer fans potentially have something to keep their eyes on with this one.