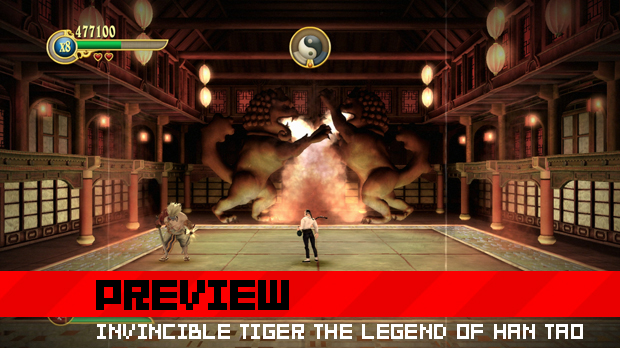 Invincible Tiger The Legend of Han Tao is an upcoming beat ‘em up game for XBLA and PSN. The game has cartoony visuals and a ‘70s kung fu flick style to it.

Invincible Tiger is also the first console game to be in 3D. This isn’t your lame plastic red and blue 3D visuals. The visuals really jump out at you when you wear the 3D glasses. Hit the break for more on Invincible Tiger.

The story sees the main character, Han Tao, as he goes on a quest to reclaim the Star of Destiny that was stolen by evil forces. My hands-on time with the game was short, but I fought against a wide variety of enemies and liked how fast paced the action was.

The 3D visuals were extremely impressive. In one of the levels, Cherry Blossoms petals were blowing about and you could have sworn the petals were really in the room with you. You can play the game in 2D as well so you don’t have to worry about being forced to buy and extra accessory.

With that said though, I have to wonder what they’re going to do to promote the 3D glasses. The game is a digital title so packing in the glasses with the game isn’t an option. The glasses also looked pretty expensive.

There will be two-player co-op both local and online and the game is expected to be around eight hours or so. Check out the two gameplay videos below to see how the game looks in action.