When I first heard about inFAMOUS: Festival of Blood I was instantly interested in this stand alone addition to the inFAMOUS franchise. Most downloadable content today consist of either map packs and character/weapon skins, or in rare cases, single-player content that almost seemed planned from the outset to tie up lose ends in the story’s campaign.

Like most, I hate feeling like I was cheated out of a complete story so that I can be sold DLC later. After getting some hands-on time with Festival of Blood, I can gladly say that this is not a cash-in attempt to complete the retail game. This is the guys at Sucker Punch having fun with the inFAMOUS franchise, providing an interesting twist to the inFAMOUS universe and play style. 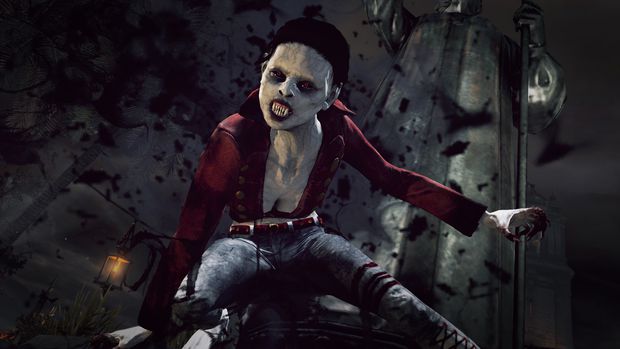 Festival of Blood takes place in the same setting as inFAMOUS 2. On Pyre Night (a New Marias holiday that’s like a mix between Halloween and Mardi Gra) Cole MacGrath is bitten by the vampire queen Bloody Mary, the leader of a vampire cult that is rampaging through New Marias. In classic vampire story telling, Cole has one night to find and destroy Bloody Mary before he completely turns into a vampire and New Marias falls to her wicked plans.

The narrative of the story is told through the eyes of my favorite inFAMOUS character, Zeke. While trying to pick up a sexy lady at a bar, Zeke retells the events of Pyre Night to try and impress the young bar patron. This provides a fun twist to the narrative since it’s unclear if the events playing out in Festival of Blood have actually happened or if they are really Zeke embellishing aspects of the story to impress this young lady. Either way, Zeke provides his comedy stylings to keep things fun while Cole fights his way to Bloody Mary. 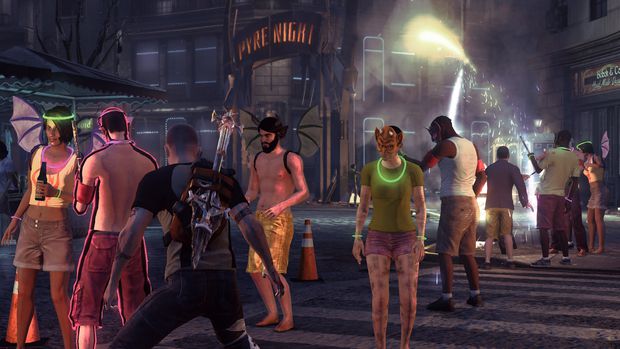 During the course of FoB, Cole will be able to harness some of the more positive aspects of turning into a vampire. Cole will gain new powers through the night, such as the ability to turn into a pack of bats and fly around the city. The duration of flight is determined by the amount of blood that Cole has sucked out of the New Marias population. You can walk up to any NPC and suck their blood by pushing the R1 button. Since it’s encouraged to suck other people’s blood, the morality system of past inFAMOUS games is gone.

Personally, I like how the game forces the player to not worry about always doing the morally right or wrong thing now. Cole has to stop Bloody Mary at any cost, and if that means a few citizens have to lose a couple pints of blood, so be it. The ability to fly is not only a great way of transverse the cityscape, it can also be a tactical weapon in combat. Whenever the creatures of the night start to get the upper hand in a fight you can transform and get some distance to regroup and formulate a new strategy. The enemies in FoB mean business and planning out how to take them down is key.

Besides your standard vampires, you’ll battle against fast moving harpies and the stronger first bloods (giant bat/vampire baddies like those seen in the bar fight in the movie From Dust Till Dawn.) The harpies are particularly cool enemies since they can stick to walls and attack you from unorthodox positions. What also makes the enemies in FoB so formidable is that they can blend in seamlessly with the normal New Marias citizens. Don’t expect to rely on your radar either as you won’t know you’re being attacked until the baddies turn into their vampire form. 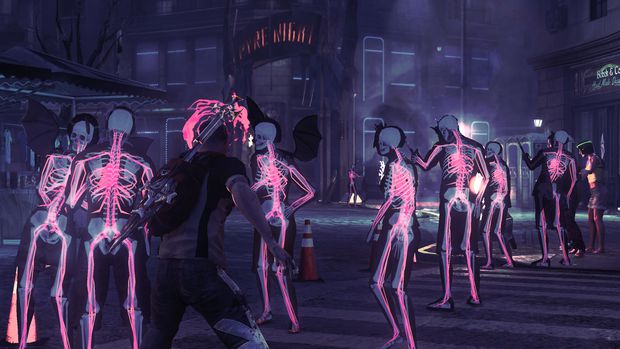 New powers and enemies aren’t the only new experiences you’ll have in FoB. There are a number new areas to explore in New Marias in the form of underground catacombs. The catacomb sections reminded me a lot of the sewer section in the first inFAMOUS. While I wasn’t shown how big these areas are I was shown some of the other changes that New Marias has gone through for it’s Pyre Night celebrations. The streets are covered with big statue-like creations and varies other decorations setting a more party oriented theme through out the main island of the city. There are fireworks going off and people in costumes dancing in the streets completely unaware of the chaos that’s brewing under the surface. These changes only take place on the main island of New Marias but it creates a different perspective to the city and it’s fun to just watch the NPCs dance around without a care in the world.

While the majority of what you get with FoB is an interesting single-player campaign, you’ll also be able to create your own levels with the user-generated content tools seen in inFAMOUS 2. Likewise you’ll be able to play levels created by other PSN users as well. Sucker Punch has even added some cool new tools to their UGC that you’ll be able to use in FoB and inFAMOUS 2 if you purchase FoB.

Their new feature allows users to set up and shoot 2D images to create a better narrative aspect to their level. Users can set up enemies, objects and NPCs within the environment, manipulate facial expressions and set-up the camera angle to create shots to add more dramatically flair to their levels. With the addition of UGC and it’s new features, FoB players will be getting a lot of bang for their buck. 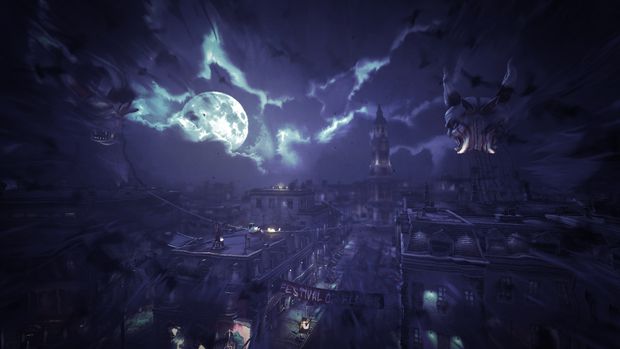 Originally Festival of Blood was said to cost $14.99 but has now been slashed to an even more appealing $9.99. Like I’ve stated before, Festival of Blood is a standalone product, meaning you don’t have to own inFAMOUS  2 to play. This is great for players that haven’t had the opportunity to try out Infamous before or gamers on a tight budget.

Festival of Blood is why I like the idea of DLC. It allows developers to have some fun with their work and create content that might normally never see the light of day. Festival of Blood will be up on the PlayStation Network on October 25, just in time for Halloween.