Warning: This article is going to basically be endless gushing about upcoming PS3 action RPG 3D Dot Game Heroes. No objectivity. Just gushing. I wanted it from the first time I saw it, as did much of the rest of Destructoid’s staff. But now, after seeing a presentation by Atlus today, I want it even more.

I was already sold on 3D Dot‘s fancy-looking yet blocky vintage RPG parody formula, but I saw today that there’s so much more here than old game references. This looks to be a solid stand-alone experience that would appeal to people that somehow missed the last 20 years of gaming history. I don’t know any of those people, but I’m sure they’d like this.

The presentation began with a demonstration of the editor, where you’ll build your own 3D character from scratch. For brevity’s sake, a smiley face was built. There are 6 frames of animation: a couple for walking, a couple more for attacks, and others, like a cheer pose. They’re built in a 3D grid. The cursor can be moved with the d-pad while the analog sticks zoom and rotate. Left and right triggers can change colors from a pre-selected quick palette. Selecting blocks and hitting R2 will let you move entire chunks of blocks, making animation easier. The editor looked very intuitive.

Atlus says that a character built with only one block would even be playable, though the hit box around the pixel man would be much larger. That’s no fun. You might as well make that Dick Man you were imagining earlier. Me? I think I’m going to make a 3D version of Epic Beard Man.

My mind was already ablaze with possible character creations when I caught a peek of some of the others that the Atlus staff had created. I don’t know if they want this shared, but i saw various fungii, slime, plumbers, and bombers of blue in the mix. Just to show what could be done, we saw a section of the game being played by a 3D racecar as the main character. It was quite amusing. Seeing this made me excited to re-create some obscure character in pixel form that only a few would probably appreciate. Albedo’s cat, anyone? 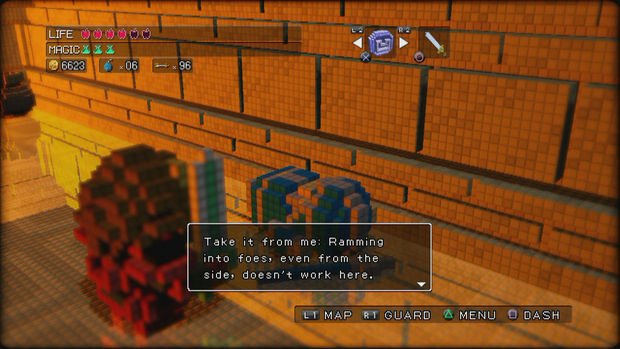 I saw bits and pieces of the game, but all impressed. It starts out with the king of Dotnia bitching about how no one comes around to his lovely kingdom anymore. 2D is out, apparently. He revamps the land in 3D, which was great for everyone except you, the chosen hero, who is called in by the king to save the day when things go south. Mr. Smiley Face goes in to see the king, gets sent out to find the Master Sword, and gets called the Hero by a fairy. Sounds familiar, eh?

It didn’t look familiar. Or if it did, it looked better. Even though the game is based on past retro titles, 3D Dot Game Heroes uses some of the PS3’s graphical power to make some pretty views. There’s full shaders, real time lighting, reflections and some of the loveliest water ever. In the options, even the color saturation can be tweaked.

Familiar came back when I saw our hero’s Dash Boots in use. Or his warping device. It really came back when I saw a dungeon, which was room-based, like one of my favorite NES games. The rooms were…linked together by doorways. Sliding block puzzles and treasure chests galore. It led to a worm-like boss, made up of segments you had to take out to kill (pictured below). This is like the shiny, polished version of what you’re imagining, though, with lovely lighting and even reflections of characters and enemies on the floors.

It sounds like there’s going to be a lot of game play included in this $39.99 game. Atlus estimates some 20-30 hours easy with the standard story, the additional modes, minigames and sidequests. There’s plenty of items to find and use. We were told that it could take multiple play-throughs to get all the crazy long swords you may have seen. It turns out that sword length is tied to your character’s strength, by the way. 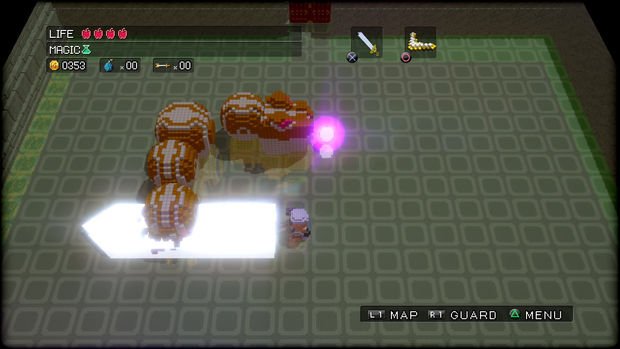 Some improvements came with this localization. Our version gets a hard disk install feature to cut out load times, but you may not want to use that, as there are over 100 loading screens that are parodies of classic games’ art and boxes. The game’s interface was also changed/improved, with one of the additions being a viewer for the previously mentioned loading screens. I saw several of them, and it was pretty fun to guess at what game was being parodied in the screens.

Also included in the localized version were a number of new starting characters. I saw Santa Claus in the mix. About 40% of the loading screens are new to our version as well.

I was impressed by the number of minigames included. Some were very simple, like the “Dash Circuit” races or the “Blockout” arcade style tennis game. Being a big tower defense fan, I was pleased to see “Block Defense,” a minigame where you’ll set up defenses against waves of attackers, but can also attack yourself, with your sword.

Here’s something else fun: There’s a From Cave, which is inhabited by blocky NPC versions of the people of From, developers of this game. They vent about the dev process of this game and promote others, like Armored Core and Demon’s Souls. I believe one even hints at a sequel to 3D Dot Game Heores.

I’ll be honest: When I first saw 3D Dot Game Heroes, I thought of it was something fun and novel, but not anything serious. It was something I’d definitely buy, but I wasn’t that excited about it. In the short time I spent seeing it today, my mind has totally changed. This is a huge game, and I’m extremely excited about playing it. I can’t wait until May 11th!