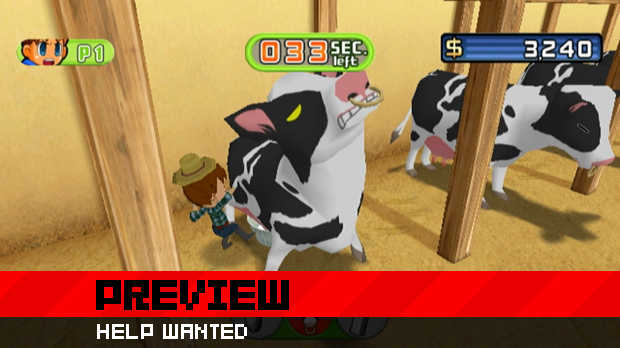 Last year, I played a game called Pit Crew Panic! from Hudson. It was a very weird and funky game, and I believed at the time that it would be the weirdest game Hudson would ever make. Turns out I was wrong in that assumption.

Enter Help Wanted, a game that involves taking on extremely odd jobs in order to earn money so they can buy items from the Home Shopping Network that will help them destroy a meteorite that threatens the planet.

Yeah, it took me a couple of minutes to take that all in too. Hit the break for a quick look at the game as well as a brand new trailer.

What does milking a cow, cooking fish, and being a referee have all in common? They hold the key to saving the world, of course! Well, it’s really the money that you’ll be earning from these odd jobs that are the key. Players will go through 50 different odd jobs during the course of Help Wanted to earn enough money to buy the ultimate meteor destroying weapon.

Each job requires a very different task from the player. With the cow milking job, players will have to swing the Wii Remote and nunchuck in rhythm to pull the udders of the beast. You have to match up the on screen prompts, otherwise your cow will get mad and eventually runaway if you’re not milking him properly. Some jobs will require you to complete the entire task, while others will reward you for at least completing part of the job. Even if the cow runs away, if you squeezed a few drops of milk out, you’ll still earn money.

A handful of jobs are open in the beginning, and as you earn money, you can buy new work clothes from the home shopping network to unlock more jobs. You have to dress the part, and clothes don’t come free! Other jobs saw me rolling a patient on a gurney through a series of halls in a hospital, all while avoiding doctors and patients walking around the halls. After that, I put on my apron to become a short order cook. The jobs go all over the place, and should keep people with short attention spans enthralled.

Help Wanted also features local multiplayer for 15 of the 50 games. Look for Help Wanted later this year for $29.99.