Bungie invited Destructoid out for a glimpse of some new hot Halo action this week. Of course, being close to Seattle and an unabashed Halo fangirl, I answered the call with the enthusiasm reserved for special clients only.

In addition to some juicy Firefight action, I was able to preview the new Mythic Map Set and, as expected, get my ass kicked in some new locations, including the much anticipated Midship remake.

Let’s be honest — all three maps give me a Bubble Shield. In my pants. Hit that jump.

Halo 3: ODST will ship with all three map packs (Heroic, Legendary and Mythic) on a separate disc — and it will also include three new maps to add to the Mythic collection. “Heretic,” “Citadel,” and “LongShore” are the new additions to the family; the first two being smaller symmetrical arenas good for team matches, and the third being an asymmetrical, more open map designed for larger parties. 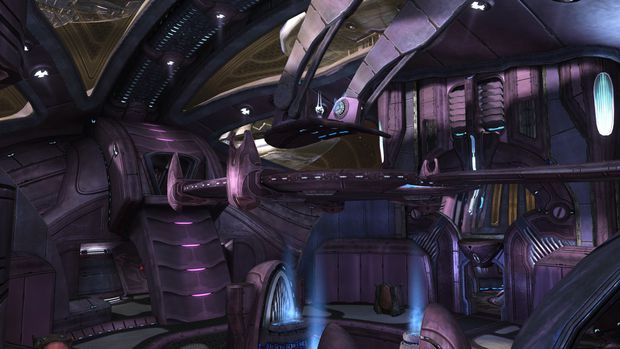 “Heretic” is the shiny new remake of the popular Halo 2 map “Midship.” It feels the same, with the key weapons in place, and those who loved “Midship” should expect some heavy nostalgia. I always found this map to require way too much jumping around for my liking, although that speaks more to my jumping “ability” than it does the map. It’s definitely more fun with the Carbine and an Energy Sword on hand, and a bit of fancy footwork to navigate some tricky corners. The Pious Inquisitor is looking sharp as ever, too, what with the upgraded textures.

Man. I love purple. The hue of my armour looks so pretty against it when I’m being slit toe to head. 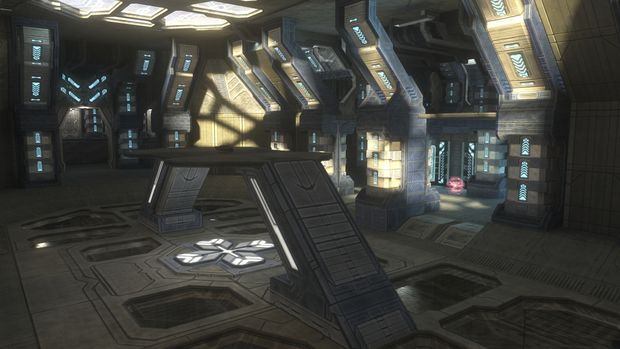 “Citadel” is probably my favorite of the three, seemingly based on a Citadel from the Ark’s Cartographer. It’s symmetric, providing ample ducking spots, but demanding some serious attention to angles of opportunity for you and foes. You can run laps around the thing, which pretty much ensures a bloody encounter every two seconds, and if you’re really quick there are quite a few sniping chances.

Lots of multiple target encounters and teaming up on enemies in this one — just be sure to watch each other’s backs while you’re doing it, because gameplay is quick and weapons are plentiful. I found good old Team Slayer to be ridiculously fun in “Citadel,” even if a little cramped at times. I love it when a level makes me just a little paranoid. 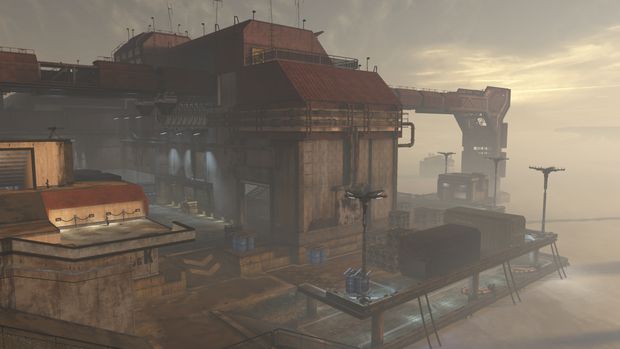 “Longshore” is the largest of the three new Mythics, and the only one with vehicles. We played a full 16-player game of Capture the Flag, and I only wish I’d had more time to enjoy the glee that is this map. It’s intricate, with multiple paths to your destination if you’re playing one flag CTF or Assault. The defending team is really forced into cohesive gameplay, which is refreshing — I’m getting sick of maps allowing the defenders to huddle around the flag throwing grenades at me, and not really deploy into tactical positions.

“Longshore” has too many angles of approach to allow the defenders to stick around at the flag; the incorporation of a switch-triggered extending bridge above the flag base means that at least one player has to advance to guard the switch ahead. As soon as that bridge is activated, it becomes incredibly difficult to keep eyes on all targets coming from ahead, above, and below.

The two Ghosts are tricky to maneuver around the structures but definitely useful to take out suckers on the ground, and the turrets kick some butt as always. Make sure to check out the freezer; there’s some handy stuff in there, too. Definitely going to be one of my more played maps when I get the game.

All in all, nice stuff. It’s great to see Bungie listening to suggestions, as they mentioned the main reason for bringing “Midship” back as “Heretic” was fan service, and they seemed excited about being able to release it as close to a pixel for pixel reconstruction as possible. Always nice to feel like the audience is being heard.

Check the gallery for some pretty epic screenshots.