People like to tell me that I don’t have a very strong attention span. Like it’s my fault that chickens are consistently funny and that the socio-political situation of 17th century English Renaissance were so damn important like the time I fell asleep in stats class and accidentally farted myself awake (true story). Jeeze. Big deal if I tend to have an attention span of a squirrel. I like to say I get a lot done, but others tell me I need to chill the hell out.

I say all this, as I think I’ve found possibly the best RPG for a person like me: Half Minute Hero. Dale got some hands-on time with the game during E3, and there’s actually a demo floating around PlayStation Network if you are so inclined. However, I’ve got to say, that’s only an initial impression, as I’ve seen how the game plays out in it’s different modes, and it’s one cracked out surreal experience. And I loved it. It’s an RPG for the ADD. Hit the jump for more.

Half Minute Hero takes all the standards of RPGs, Shmups, and RTS and turns it all on its head. Set within a generic fantasy land, Half Minute Hero starts you out with a blond boy-man out to save the day. While cut scenes are lovingly hand drawn, everything in game is done with blown-up sprites, silly intense music, and a certain tongue in cheek attitude to the genre it’s farting upon.

First, there is the initial mode you play, Hero 30. This is the beginning mode with our blond adventurer. He’s quested by the king to stop the generic bad guy who has set a timer to end the world in 30 seconds. Fortunately, battles are very fast, with your pixelated hero bumping into bad guys until they pop away. Usually you’ll be leveling up after every battle, and it’s very easy to reach level 99 in no time. Too bad your level resets every quest, or if you accept new weapons. Sorry charlie, the game likes to screw you over. 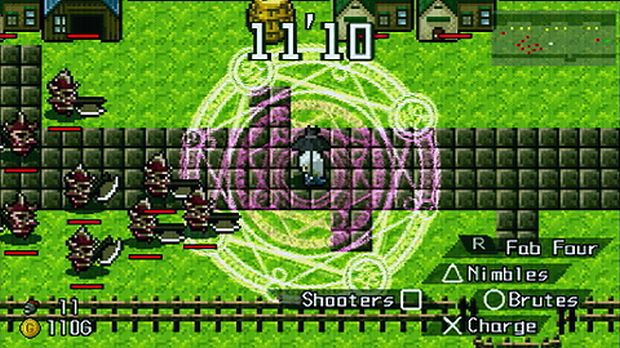 Anyway, the problem is that 30 seconds is not quite enough time to level grind and solve the problem. Thus, the Time Goddess, a money-grubbing entrepreneur is willing to add thirty seconds of time for a bunch of cash, which get’s more and more expensive after each usage. She’ll help you out if you’re out of money, but your clothes go with it.

Ultimately, the experience of this initial RPG mode is a balance between grinding (a term they lovingly throw around in-game), buying health items, buying more time, and defeating the boss, with some minor puzzle elements. It’s so damn self-aware, it’s almost impossible to not be charmed by this game. I don’t think I have ever seen a game so ready to turn a gameplay element of “level grinding” on its head. It’s practically artistic. 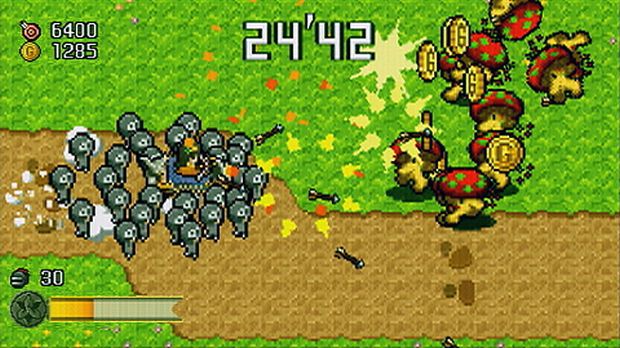 And I thought this was the only mode! There’s three more, actually, which all play on this 8-bit/30-seconds or you die. The second mode is Evil Lord 30, which is a mode where you are playing a bad guy whose girlfriend has been transformed into a bat, and his plot forces him to accidentally save people and become a hero. He plays completely different from Hero 30, as an RTS. There’s a glowing circle surrounding him, and you charge up to summon baddies to fight for you. Charge it up so that the circle fills up all the way, and you’ll summon a powerful range character. Just tap it, and instantly dead helpers will fill the screen. Once again, you’ll be racing against the clock and buying more seconds from the goddess.

The third mode is Princess 30. Here, you are a princess who is tasked to save her kingdom, and she is held by a bunch of knights. They have 30 seconds to rush outside of the castle and pick up items and save people before rushing back into safety. This is a Shump, actually, in 8-bit glory, and the princess is tasked with shooting bad guys and buying time from the goddess by running over the goddess’ rug and paying money. It’s fast, chaotic, and there’s always a tense rush to finish your job. 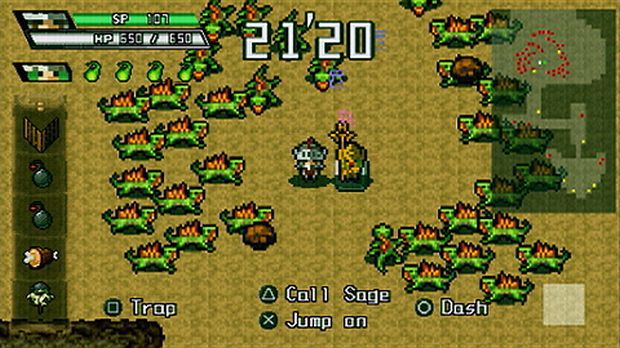 The final mode, with I unfortunately did not see, was called Knight 30, and is a sort of defensive King of the Hill mode. Expect the same joking attitude and loving affection for defensive games as all the others have for their respective genres.

One to four player multiplaer is promised, although I was unable to see how that played out. Expect a versus mode, and there is a screenshot of Hero 30 versus.

I have to say it, you know when in Super Mario Bros. when the timer would reach a minute left, and you had to rush to make the finish? That’s how this game is all the freaking time. It’s like Warioware got a hold of standard 8-bit games and injected them with high grade cocaine. It’s effing crazy, and probably not everyone’s thing. However, for a guy like me, it left me wanting to play more. Definitely keep an eye out for Half Minute Hero next month, and certainly check out the demo currently out.