Since its inception in 2005, the Guitar Hero franchise has become one of the biggest names in videogames, in addition to cementing itself as a pop culture phenomenon. Guitar Hero and its main competitor, Harmonix’s Rock Band, are fixtures at parties — after all, you’re never too drunk to strap on a plastic guitar or get on the mic.

But the recession has put a damper on everything, including sales of videogames — especially ones that come in expensive boxed sets with peripherals. And even a standalone, sixty-dollar game with what are perceived as incremental improvements might be asking a bit too much in the economic downturn.

So Neversoft went out and tried to ensure that Guitar Hero 5 would be a worthy successor to last fall’s Guitar Hero World Tour. I got some hands-on time with the upcoming full-band game at an event in San Francisco last Thursday; read on for my thoughts. 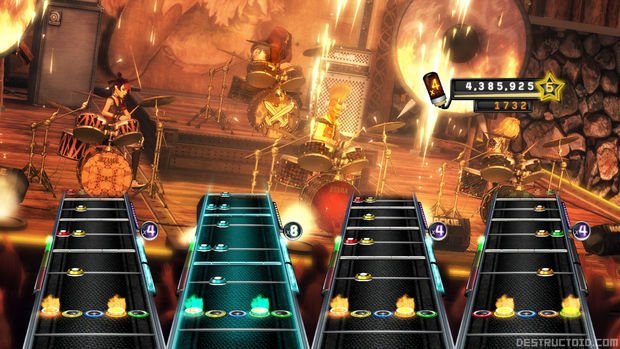 Full-band games are loads of fun, but setting everything up can definitely be a hassle — especially if your party patrons don’t feel like joining in on a particular instrument. Guitar Hero 5 has finally done away with complications like signing into profiles and drawing straws for instruments by introducing Party Play, which allows you to play with whatever configuration of musicians you want. If nobody feels like singing, and you happen to have four plastic guitars lying around, four of you can play guitar on one song — and each person can choose their own difficulty level.

You can even change instruments and difficulty levels on the fly — that is, during a song. So if you’re bored by the Hard guitar part, you can switch over to Expert bass while your buddies continue rocking out; your note highway alone will be paused, and it will start up again (after a few bars of rest) after you’ve chosen your new settings. It’s a pretty nifty solution to the issue of the whiny friend who always complains about being stuck with a plodding bass line. In fact, someone can even join or leave your game in the middle of a song. Simply put, Party Play alleviates all the headaches previously associated with playing full-band games. Now there’s nothing standing in the way of rocking with your family and friends. 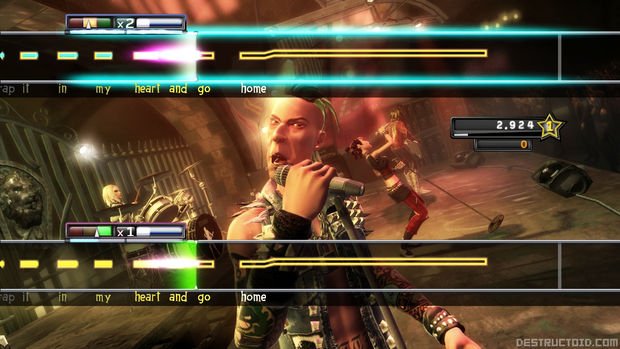 While Party Play makes life easy for everyone, especially less-tech-savvy players, RockFest is a new addition for the more hardcore, ScoreHero-reading crowd. RockFest introduces a slate of modes that will keep skilled Guitar Hero players enthralled for months to come. “Streakers” hands out points for — you guessed it — long streaks of notes. In “Momentum,” you’ll start out on Medium difficulty; hitting 20 straight notes will ratchet up the difficulty and your score, but missing three notes in a row will drop you down a step. Another option is “Perfectionist,” in which players are ranked by the percentage of notes they hit in each section of a song.

Guitar Hero 5 also offers song-specific Challenges, which provide a significant amount of depth and replayability in addition to, uh, challenge. You can read more about the Challenges here.

Of course, the 85-song soundtrack itself is the game’s major selling point. It features a number of songs and artists I’ve always wanted to see in a music game, like Dire Straits’ “Sultans of Swing” and Stevie Wonder’s “Superstition.” I sat down and played through all 14 minutes of the live version of Peter Frampton’s “Do You Feel Like We Do?” with 1UP.com’s Garnett Lee, and we had a fantastic time just jamming (we both played guitar). 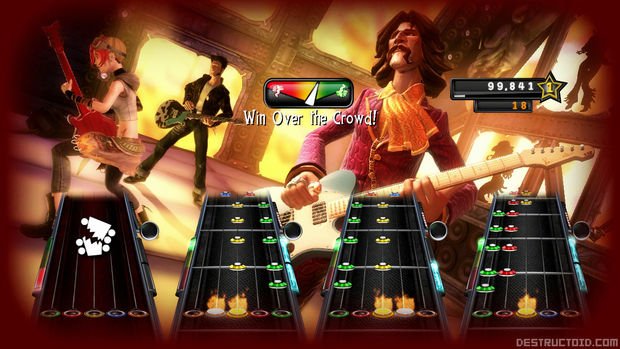 Neversoft has also made many much-needed tweaks to the visuals and basic gameplay, taking after Harmonix and Rock Band. No longer do all four players share one Star Power meter; each person now has their own gauge. And unlike in World Tour, one player failing a song doesn’t mean that all is lost, since fellow band members can be “saved” this time around (see screenshot above). In GH 5, you’ll notice that some notes are on fire; these are part of the all-new “band moments” in multiplayer — if the band members hit the fiery notes in unison, an extra score multiplier will take effect.

Sure, a lot of this might smack of “me-too” changes if you’re familiar with Rock Band 2. But I suspect that for many gamers, the allure of the specific songs in Guitar Hero 5 will be too strong. If you’re drawn in, the game’s September 1st release is only a few short weeks away.