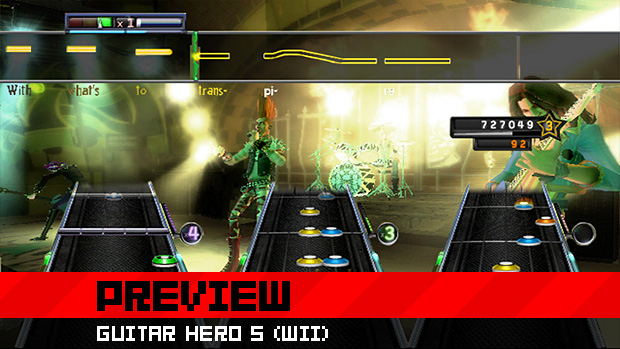 In almost every case, the Wii version of a multiplatform game is somehow “gimped.” In other words, it lacks some of the features and characteristics of the PlayStation 3/Xbox 360 version (aside from the inevitable lack of visual fidelity, when compared to high-definition graphics, that comes with being a Wii game).

But Vicarious Visions, a veteran Wii/DS studio that has developed Guitar Hero on Nintendo platforms for Activision since Guitar Hero III, is tired of that. When I spoke with CEO Karthik Bala at a Guitar Hero 5 press event in San Francisco last Thursday, he told me that his team — a self-professed bunch of “Nintendo fanboys” — feels that “there’s no reason that the Wii version can’t be on par with the other platforms.” So they set out to make that a reality for Guitar Hero 5.

Read on for my preview of the Wii version of Guitar Hero 5.

[Update: This preview originally said that Guitar Hero 5 on the Wii does not include GHStudio. That is false; the game has that feature, and the article has been updated to reflect that. –Samit] 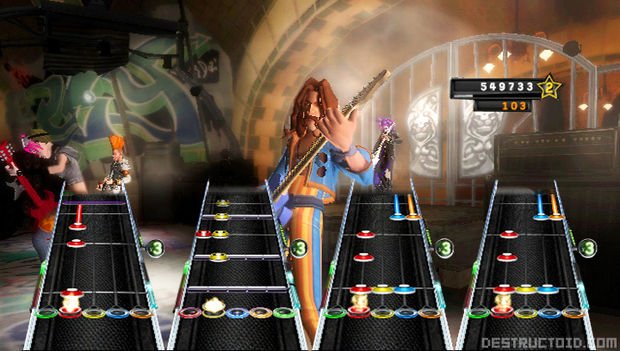 That includes Party Play, which allows you to play with any combination of instruments and microphones you like — four guitars is just as valid as two vocalists, a drummer, and a bassist — as well as jump in and out of songs, and change difficulty, on the fly. All of the competitive additions — namely, RockFest and the Challenges — are also present on the Wii. 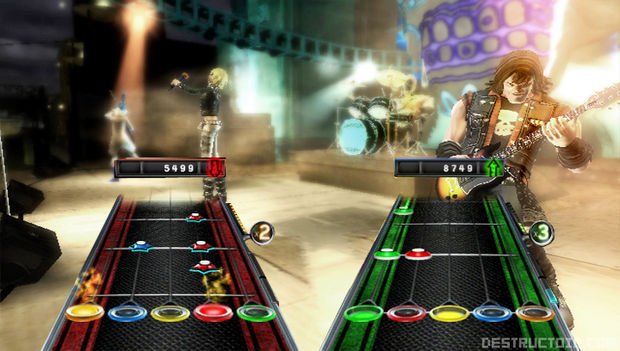 Even online play on the Wii is on par with the PS3 and 360 setup. Vicarious Visions decided to forgo Nintendo’s Friend Codes; instead, the game will use the Wii’s address book as a friends list. They also did a complete overhaul of the netcode — whereas Guitar Hero World Tour offered eight-player multiplayer action that was limited to four players on two Wiis, GH 5 will actually allow gamers on eight different Wiis to jump into a competitive match.

In addition to having almost everything from the PS3/360 version, the Wii version of GH 5 has two exclusive modes. Both offer Wii/DS connectivity. The first, called “Roadie Battle,” pits two human players against zero to two human opponents (it’s designed to be played 2-on-2). Player 1 is on guitar on the Wii, while his cooperative partner is on the DS, acting as his roadie. In a setup that’s reminiscent of the guitar battles from Guitar Hero III: Legends of Rock, the roadie’s role is to sabotage his opponent’s equipment while keeping an eye out for attacks from the other roadie.

One attack has you breaking open a guitar case, rewiring the strings, and replacing the opponent’s guitar to activate Lefty Flip; in another, you damage the guitarist’s amp, which creates flames and smoke to obscure his screen. Bala said that “there’s a deep level of strategy to it,” referring to the decision to stay and defend or run and attack (once you initiate an attack, you have to see it through to completion). As you can imagine, this leads to some pretty frantic battles with the guitarists shouting at their roadies to help them out. You don’t need a DS cartridge — the game is wirelessly downloaded to the DS’s RAM. 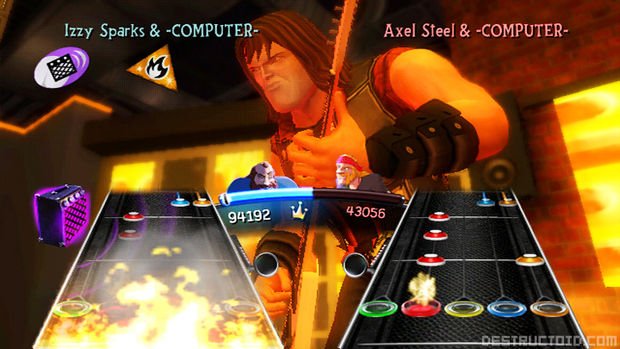 The other Wii/DS mode is called Mii Freestyle, which was present in Guitar Hero World Tour on the Wii but has been augmented here. Mii Freestyle inserts your Miis into the game in a Wii Music-inspired “play what you want” mode that sees you wildly banging on the drums and whaling on the guitar. You can even waggle the Wii Remote and Nunchuk instead of hitting the drum pads with drum sticks. If you do create something useful in Mii Freestyle, you can save the video and edit it on your DS, controlling the stage lights and effects, and then share it with WiiConnect24.

Bala called it a “Guitar Hero-Nintendo ecosystem,” while noting that although Vicarious Visions wasn’t exploring new ground with console-handheld connectivity, they were innovating in what exactly they were doing. The studio also innovated with the music store in World Tour, and it’s received an upgrade in GH 5. The store now supports packs and albums instead of just singles, and of course, it’s going to allow you to import World Tour DLC as well as on-disc songs from World Tour and Smash Hits. 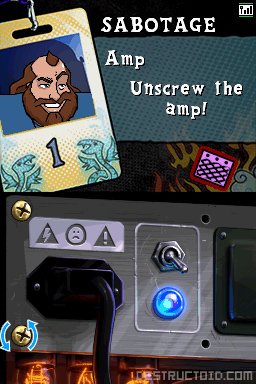 Vicarious Visions put a lot of effort into ensuring that the Wii version of Guitar Hero 5 isn’t an inferior iteration of its high-definition brethren. So if you were wondering about picking up GH 5 on the Wii, rest assured that you’re getting the same experience as everyone else.