With summer almost here, I’m sure die-hard football fans are already packing their coolers and mixing their magical sauces in preparation of pre-season football… which starts in late August. But before any real pigskins fly in the NFL, the true kickoff for football season starts with the annual release of Madden NFL, allowing armchair quarterbacks to test their might and wits against their chest-painted brethren as chunks of salsa fly in the midst of the action.

With this year’s installment, Madden NFL 13, EA is looking to offer a much more realistic presentation to the game, harping on the visual style and camera angles one would find in an actual broadcast. On top of that, the passing game has been given a buff, and the GameFlow play-picking mechanic looks to be more useful this time around.

Oh, and if you’re a fan who always thought play-action plays were useless, this year may finally fix that. 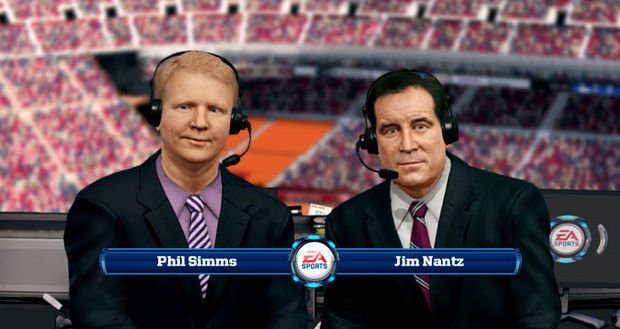 Let’s start with the upgraded passing options, as that’s the bulk of the build I was playing. Those canned, sluggish animations from the past have now been removed, which not only gives you more control with the play but also makes the game run at a faster pace. No more are you waiting precious seconds for, say, a fake handoff; instead, the action happens much more quickly. This proves especially helpful when trying to perform the aforementioned play-action passes, which, in past games, would often result in a sack. That’s not the case now: in many cases, the running back you fake the handoff to will now hang back and block for you, as opposed to running straight toward the line of scrimmage.

Say you’re running a play-action play in the single-back formation. Previously, once the fake handoff was completed, you as the quarterback would be left alone in the backfield, open for a sack on either side. Now, with the new blocking route, you’ll be protected in the pocket for a few seconds as you scan the field. Even better, if you see a blitz coming, you can now abort the play-action pass after the snap by pulling the right trigger to send your halfback into pass protection.

Faking the pass with certain receiver routes will cause the defense to act now, such as during the out-and-up “sluggo” route, where faking at the right time — just before the receiver cuts — could leave him wide open downfield. 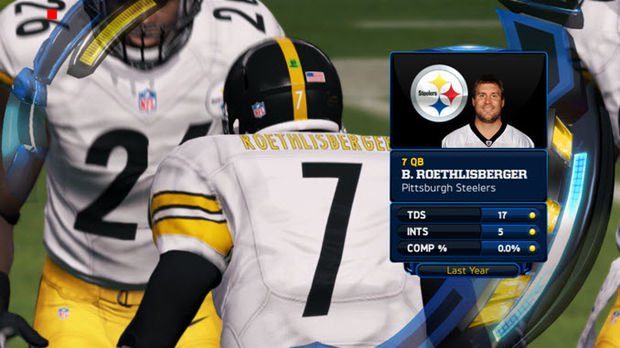 If you’ve played a few games of Madden, you without a doubt have the instinct to hold the left stick down as you snap the ball to get away from the D-line. But while ending up 15-20 yards behind the line of scrimmage before passing may work in NFL Blitz, it means poor results in Madden. EA is looking to amend that playstyle this year by implementing a wide variety of one-, three-, five-, and seven-step automatic dropbacks that are tied to specific plays. Tiburon is hoping to teach players to stay in the pocket. It’s an aspect that’s still being worked on at this point, but having more time in the pocket doesn’t sound like a bad thing.

You’ll need that extra time scanning the field as well, because you can no longer send the ball to any player at any time. As in real football, receivers only start to expect a pass at a certain point in their route, so realistically, they won’t be looking toward the quarterback immediately unless that’s what their route calls for. In Madden 13, the button icons for each receiver will be dim if they are not yet expecting a pass. That’s not to say you can’t pass to them, however — you still can, but you would then have to manually switch to that receiver and attempt a user catch. Odds are, though, the pass will end up at the receiver’s back instead of his hands.

There are now different pass trajectories added to the ball, too. Where past games had either bullet, touch, and lob throws, there are now subtle differences in speed depending on the route. With the slant route, for example, the quarterback will now perform a quick pass, sans the stepping forward animation, right as the ball is snapped. After all, real QBs want to get rid of the ball as quickly as possible on slants.

The GameFlow feature introduced a few years ago, which auto-picks plays for the user, has seen important improvements. Situational playcalling is much better in Madden 13. In two-minute drills, it will no longer suggest Four Verticals (a Hail Mary-type play) all the time. The defense has also lost its psychic ability to read plays even before they happen. They will now react to what they see the offense do after the snap, as opposed to sort of already knowing that you’re trying to do that up-and-in route. 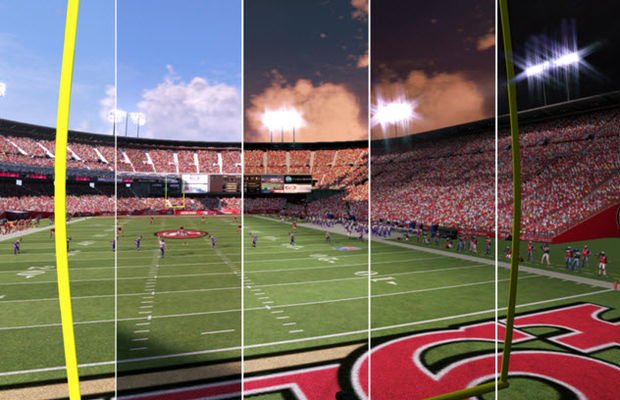 The presentation overhaul rounded out the build I played, which features new elements such as improved replay camera angles, including the hanging wire cam above the action; pre-game introductions and chit-chat introducing the matchup; and motion blur in replays. Perhaps the biggest addition to the presentation is the dynamic lighting. No longer will a game starting at 1 PM still look like 1 PM three hours later; progressive lighting now has the sun and shadows move between plays, and you can now see the skies an afternoon game that ends at 8 PM getting realistically darker as time elapses.

Madden has had the reputation for some time now that each year’s installment is the same as years past. While that may have been the case before, it seems like EA is attempting to make changes and adjustments to the game of pigskin that will provide a huge impact this year. The new passing options and abilities are major improvements, and we are inching closer to having a game on-par with a real broadcast thanks to the new presentation options.

August is a ways off, but it seems like the wait will be worth it.