I must admit a tiny bit of trepidation when I was about to start playing Godsrule, the cross-platform, browser-based MMORTS. A persistent RTS inspired by Scandinavian mythology? Sounds right up my street, I thought. But visions of the many horrors I have witnessed in Facebook games and their ilk came to the fore, and I was left uncertain.

After a couple of days of village construction, recruiting, and finally a climactic battle in which developer Jónas Antonsson thoroughly trounced me, I’m left with a significantly more positive impression of the game. 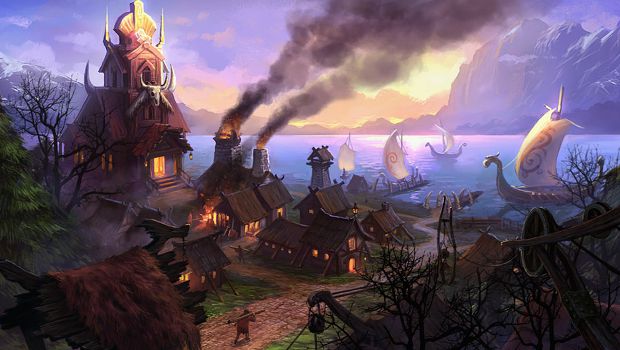 When old gods are killed off, you might imagine things could get a bit messy. This is most certainly the case in Godsrule. Warring empires and factions clash over land and resources in a bid to dominate the world. Warriors, monsters, and magic are all employed in their efforts to be top dog, or top Viking, rather. Players can select one of two races, the Asir, and the Vanir. They each have their own unique units and abilities, as well as some different bonuses. I opted to play as the Asir for one reason: I could call my leader Frasir. Ho ho ho.

After selecting my race and super-awesome name, I found myself confronted with my settlement. I say settlement, I mean tent. Actually, there was a saw mill. I say saw mill, I mean a log and a lone saw. There was a neat, cleared square where I could start turning my one-man campsite into a proper settlement. It looked like a nice, safe place surrounded by trees. Home sweet home.

I rather quickly began to loathe the trees. Buildings take up a lot of space, and those trees were hogging prime real estate. After ending their green existence, I had to clear away rocks and assorted annoyances, but then, finally, I could build again. As Jonas explained, “this is just a vertical slice of the game.” Clearing space for buildings won’t be such a simple matter in the finished game. Monsters could be lurking under rocks and behind boulders will attack. So there’s going to be PvE eventually, it’ll be interesting to see how different it is from the large PvP battles. 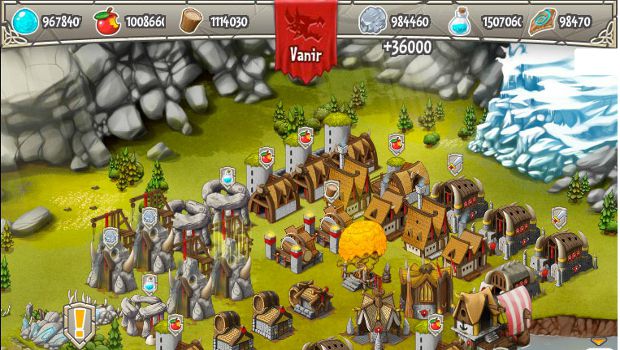 Jonas promises that there will be even more action on the map as the game is further developed, though he was keeping quiet about what it was. “You’ll have more things to do than just building. You’ll have to protect yourself… It’s a harsh environment. And if you just look at the background image, that beacon with the fire in it, and the bones in the water, those are there for a reason. So, for instance the torch beacon starts unlit. You have to do certain things to get it to light up, and that gives you things.” Terribly vague, but I’m interested to see how interactive the village’s environs will end up being. The bones Jonas referenced look a lot like they belong to a dragon, so color me intrigued.

My fledgling village was presented in a simple, yet charming aesthetic. It was certainly colorful. Beyond the forest was an imposing glacier, and big ol’ mountains. Like the beacon, they serve a purpose, but I certainly don’t know what it is. I tried to get Jonas to confirm if a Frost Giant was going to appear, but he wouldn’t break.

Players won’t have to just be warlords, they can become big-shot traders, playing the player-driven market. “We want to allow for a situation where you just want to be a farmer, or just create timber or whatever, and just create the resources, that’s fine, you can do that. If you just want to be a builder, then that’s fine. You can sell your stuff on the market, if you just want to be a trader that’s fine as well. You can play a part in manipulating the market, buying low and selling high, you can do that.” As people start to band together to make clans, they might like to recruit players who focus on something more specific, so they always have people making money or resources. 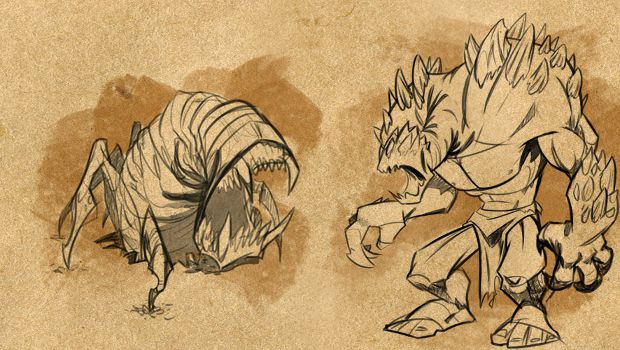 Community is important in Godsrule, and players can join large clans who fight together and hopefully prosper together. What’s interesting about the social aspect of the game is that there isn’t just going to be a big messy chat filled with spam and loads of people talking at once, usually over each other. Instead players can follow others and make blog posts as well as communicating more directly, it’s a little bit like Tumblr or Facebook.

My village was growing swiftly, I’d expanded quite a lot and upgraded most of my key buildings at least once. I’d even started putting together my menacing army. I was in need of a great amount of resources, which led to lots of fist shaking directed at my miners, farmers and other peons. Units aren’t the only thing that can be used in battle; spells are an important part of a leader’s book of tricks.

I constructed a henge to acquire mana, a temple to research spells, and voila! I got me some nice flaming destruction. Then I got another one. I was feeling pretty chuffed so I decided to get some intel on my potential opponents. I decided to quiz Guðmundur Bjargmundsson, the game’s producer and the studio’s co-founder, about his own army. I wish I hadn’t. My paltry two spells and 20 units paled in comparison to his vast and varied army. 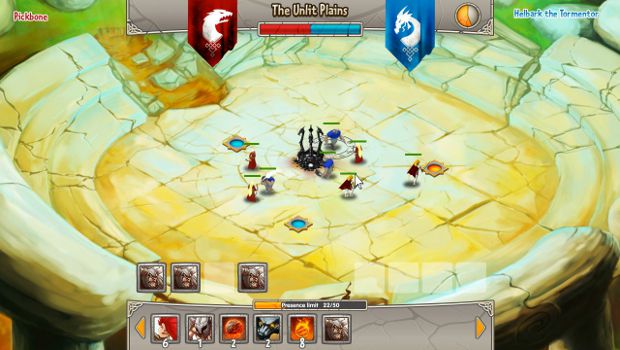 After a foray into the debug menu, I finally had the army I deserved. Jonas threw down the gauntlet, so I readied myself for battle. The world of Godsrule is one of islands. To get to these battlefields across the sea, you have a ship for your troops. Unfortunately you only have a limited amount of space, so no matter how big your army is, you can only field a certain number of units. I selected them at random. That was my first mistake.

Conquering an island confers bonuses to the victorious faction, if they manage to hold it. Players won’t have to wait for opponents to start conquering territory. They can jump in straight away, fight NPCs and try to capture a relic in the map’s center. Other players of the same strength (there are no levels) will then be alerted that a battle is taking place, and can choose to get involved. The maps allow for 2v2 at the moment. You get more bonuses for joining the underdog, the hope is that this will make players less likely to just jump on the winning side or larger army just so they can get an easy win.

Each combatant gets a summoning dial gizmo, which can also be used to summon spells, the effect happening right next to it. The dial can be moved around the map, to better position new troops and also to slaughter unsuspecting foes with a fireball. But that can be a massive risk. It’s a delicate thing, and can be destroyed by enemies.

When I entered the battle, Jonas was being hassled by some NPC foes, horrible wraith like creatures, so I quickly sent my unit to capture the relic. I ran straight for the finish line. Then my unit died. An axe in the skull, no doubt. A lot of stuff was going on, much more than I’d anticipated. Lot’s of enemies, fire and people beating the crap out of each other, all the while I was keeping an eye on Jonas’ moving dial. He managed to take out two of my units in quick succession with a couple of char spells. As it got close to another one of my units, I attacked, not waiting for him to blow me up or bring in reinforcements. I summoned more warriors and they went to town on it. It wasn’t long before it was smashed. Victory! I felt rather smug and went back to trying to capture the center. 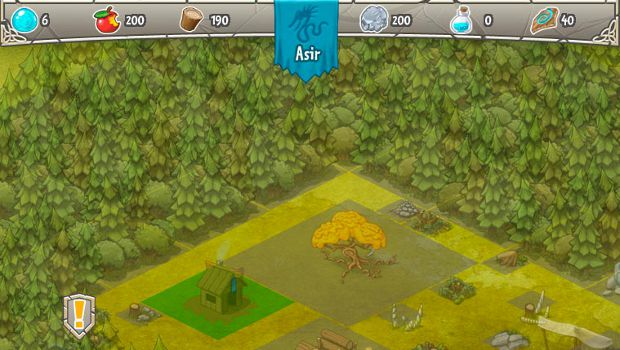 While my attention was diverted, another summoning dial appeared and a wave of enemies came forth. My surviving units were dispatched and my now vulnerable (and fleeing) summoning circle was under attack. I was a goner. That’s what happens when you try to beat a developer at his own game, I suppose. Damn developer tools!

Despite just being a peek at the combat, I had a blast. With the varied units, summoners, magical spells, and placement of the dial, there was plenty to keep me occupied and a tad frantic, as I saw my hopes for victory fall away. The battle map looked like a ruined arena, with a board game in the middle. Eventually there will be maps with mountains blocking certain parts and other obstacles like missing tiles or monster spawn points and power-ups. It seems like the battles will be kept fresh and dynamic if Gogogic achieves their ambitions.

I enjoyed my time with Godsrule a great deal. The settlement portion of the game was an inoffensive time waster that can happily be kept on in the background while you do other things, just awaiting your commands. When PvE and more interactions get added, I can imagine that aspect of the game becoming a hell of a lot of fun. The battles and conflict are what I think will intrigue most people, though. There’s a lot of depth and a great deal of potential; the prospect of playing a solid strategy game on my browser, while others fight me on their iPad, is very appealing.

Godsrule should be out early next year. PC players will be able to play from the game’s website as well as “anywhere else that makes sense,” while iPad users will be able to download an app. You can sign up now for access to the closed beta on their site.