I’m going to slip on my flamboyant fanboy hat for a second here and say that I adore the Max Payne series. Ever since the third installment was announced about 63 f*ckin’ years ago, every morning has felt like a lie to me; those subsequent years were spent in complete darkness, subject to a world where Max Payne 3 was out there, somewhere, and I didn’t have a clue what it was or when to expect it.

Then, just like that, boom … we’re given a taste of what’s to come. You can bet your firstborn child that I’ve since jumped at every occasion to see me some Max Payne 3. My first moment was at NVIDIA’s Editor’s Day event during GDC 2012, where the game was shown making sweet, sweet love to the newly released GeForce GTX 680. The second was a multiplayer session, where yours truly got his filthy hands all over MP3‘s mutual gameplay. Let me tell you, there aren’t enough after-sex cigarettes in the world. 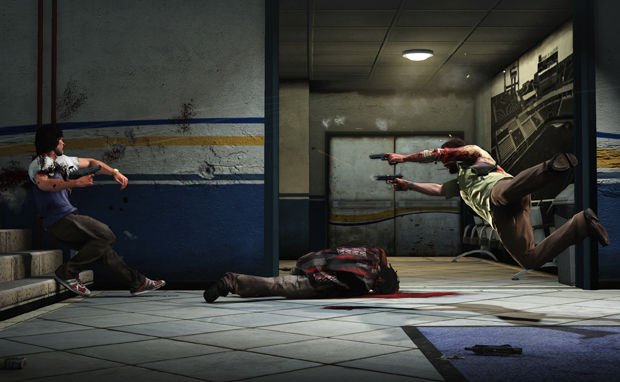 Our old friend with nothing to lose

Max Payne made its original debut on the PC, which was also where I was first exposed to the series, personally. Since then, I have continued the tradition, playing its sequel, Max Payne 2: The Fall of Max Payne, on the same platform the first day it launched. After having seen the series’ third installment in action on NVIDIA’s new 680 hardware, I can’t see this PC trend breaking anytime soon for me.

Rockstar stressed that Max Payne 3 was not a PC port. The game has been developed from the ground up with this platform in mind, even incorporating several DX11 features — which is still oddly uncommon in a lot of games, for some silly reason. So any of you PC elitists who yearn for the days of old when console games were the afterthought, rest assured that MP3 will have plenty more than what the 360 and PS3 versions can offer.

As for the actual single-player experience, all I can say is, “boing.” The original Max Payne set so many standards with regards to action shooters, and MP3 certainly doesn’t skimp on the quality that its predecessors were known for. The action is consistently fast and frantic, with slight interventions of dialogue and exposition. The stage I witnessed had Max and his buddy Passos blazing their way through a large gang-controlled stadium. Tight concession areas saw Max doing his signature slow-mo dive into small groups of enemies, littering the area (and his foes) with bullets. 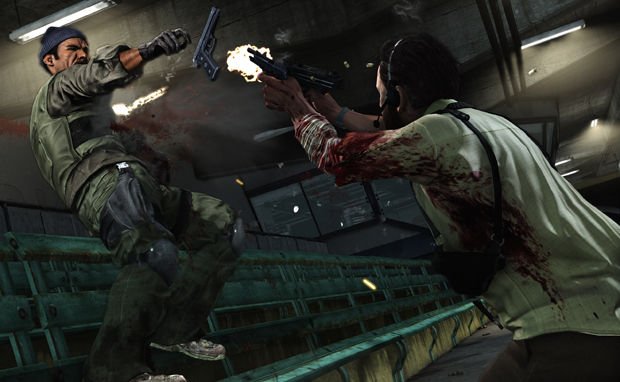 The level even provided a nice sniping diversion, where Max escorted his pal from afar, taking out any enemies in Passos’ way. At one point, Passos backed away from an ascending stairway with his hands raised, where a gang member walked down with his gun pointed. As the enemy barked orders, Max lined up the perfect killshot; the bullet, presented in glorious slow-motion (à la the original Max Payne) flew cleanly through the gangster’s head. Afterward, Passos could be seen slumping over, exasperated, as if to say, “I’m getting too old for this shit.” Even the non-gamers at the event chuckled.

It’s great moments like these that have made the Max Payne series one of my all-time favorites. Presentation has always been a main focus in Rockstar’s titles, and MP3 is no different. The series’ familiar graphic novel-style narrative is back, but rather than still panels and voiceovers, cutscenes are edited in real-time into a sort of motion comic, much like you see in a lot of comic-inspired films. The result looked like a great way of keeping things moving. Even important expository information is presented at the bottom of the frame in the game’s main typeface. For instance, if a character says something along the lines of, “First, we need to hurry and defuse the bomb,” then the words “defuse the bomb” pop up on screen. It’s a pretty nice way for the game to give the player their objective while retaining the pace.

Max Payne 3 uses Rockstar’s familiar RAGE Engine, and though one would expect that it’d be blatantly showing its age at this point, that’s not really the case with MP3. Character models look better than they ever have, and some nice effects are produced during heated firefights; my personal favorite was the Matrix-style blurry tracers from bullets after Bullet Time had been activated. PC users can even expect features like Tessellation; I’ll admit, I was a bit surprised to hear that the RAGE Engine was still capable of such feats. 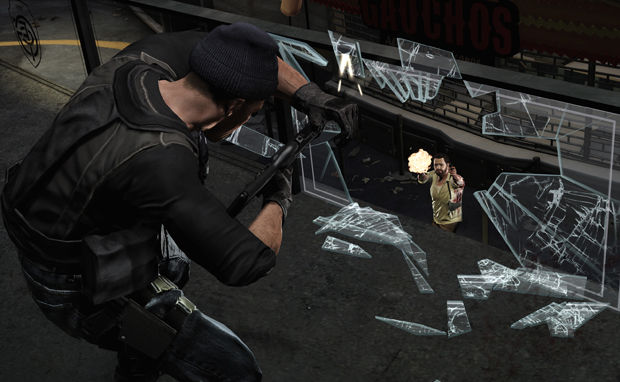 Like many of Rockstar’s other games, MP3 also utilizes Natural Motion’s Euphoria Engine. For those who don’t know, Euphoria is a character behavior program that accurately calculates the reactions and animations that NPCs have during certain situations. Red Dead Redemption fans will recognize Euphoria from whenever Marston stumbled drunkenly out of a tavern, or by roping bandits and dragging them along while on horseback. In Max Payne 3, enemies react accordingly to gunshots to specific areas. They’ll limp around when shot in the foot, or stand dead-armed after taking a round to the shoulder. To me, Euphoria’s procedural programming has always felt more fluent and lifelike than predetermined animations or ragdoll physics. I only need to point to games like Max Payne 3 for proof.

Overall, MP3‘s PC rendition looks damned sweet. Rarely has Rockstar ever disappointed us with their single-player experiences. After having seen Max Payne 3 in action, I don’t think “disappointment” will be a term any of us will hear when the game launches in two months. I’m leaving to pre-order my copy for PC the moment I’m done with this preview, no bullshit. 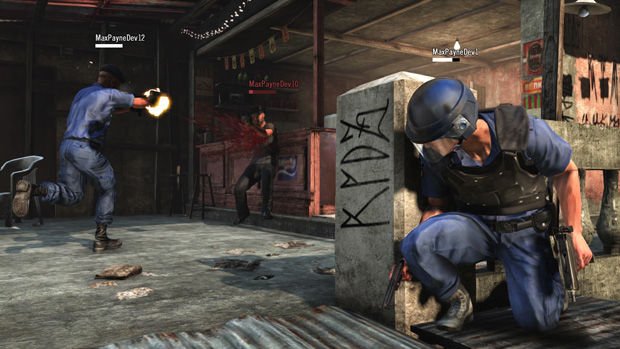 Even Rockstar agreed with me when I said this: It’s almost as if it would make more sense for multiplayer in games like GTA IV and Red Dead Redemption to suck. Both games have such insanely well-made solo experiences, that multiplayer should be some sort of shitty afterthought. Anyone who has played either of the two games online can tell you that that’s certainly untrue.

Rockstar has developed the habit of tailoring multiplayer almost directly to the single-player. By this, I mean that whatever themes are accentuated in the core solo experience are brought over to multiplayer in the form of unique modes or features. GTA IV is about gangsters and the mafia, so it’s multiplayer has a mode where a team of “Crooks” must get their boss to safety, while a team of “Cops” tries to take him down. Red Dead Redemption is influenced heavily by spaghetti westerns, so Rockstar thought, “Fuck it, let’s have a Mexican standoff at the start of each multiplayer deathmatch.”

They followed this same philosophy in Max Payne 3. Sure, the game does have the obligatory free-for-all and team deathmatch modes … some of us just want to shoot things, after all, right? I even played through a mode called Payne Killer, similar to King of the Hill, where two players take on the rolls of Max and his buddy Passos, giving up those roles once they are killed. The player with the most time alive as either character wins the match. 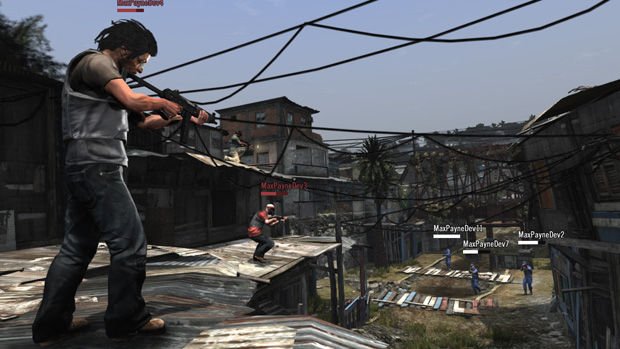 The one mode that Rockstar was proudest to show off was called Gang Wars. Basically, it consists five consecutive rounds, each a different mode than the others, which all change according to the outcome of subsequent rounds. For instance, if one round requires a team to retrieve a particular package (in this case, a bomb), and they win that round, then the following match will see that same team delivering that bomb to a target location. This particular touch makes Gang Wars seem very dynamic, and provides a bit of a narrative aspect to the multiplayer experience. This mode, along with the ability to form personal gangs and have rivals with other groups, will certainly provided a worthwhile experience in its own right.

Max Payne 3‘s multiplayer also features some considerable depth and customization. Players will have the ability to create loadouts, all with their own guns, items, and skills that are unlocked by acquiring cash and XP. The difference between other games with this feature, though, is that your character becomes slower with every new gun or item you equip him with. Believe me, it makes a difference, because I thought I’d go into each match packing heat like Rambo. Instead, I ran around like a fat asshole with knee issues. 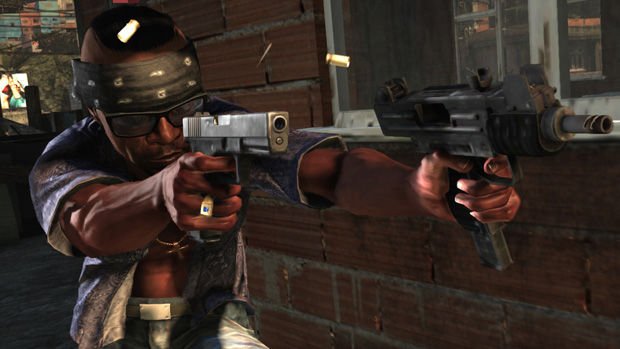 Now, I imagine a lot of people out there are particularly curious about how Bullet Time works. I myself imagined multiplayer consisting of a constant barrage of slowed time, no matter where you are on the map. Fortunately, Bullet Time is actually based on line of sight. If I can see you, then activate my BT, you slow down. And if you can see anyone else while you’re slowed, they too are affected. This not only rids us the annoyance of being slowed every five seconds, but actually creates an interesting dynamic to the multiplayer’s strategy.

Anyone caught out in the open during Bullet Time is pretty screwed, but, if players are near a corner or doorway, all they have to do is simply break the enemy’s view of them. Then, after waiting a few seconds, turn BT back on them. So, simply put, Bullet Time in multiplayer is freakin’ awesome. In fact, one of my most cherished memories will always be watching a Rockstar employee dive at me, time slowed to a crawl, only for me to club him in the face with the butt of my gun and kill him … before he hit the ground.

Bullet Time is but one of the many extra abilities that you can take into combat. These abilities are known as “Bursts,” and range from granting you and your teammates health boosts to forcing members of the opposing team to see each other as enemies. Can you imagine how pissed certain people are going to be, once they’re gunned down by a teammate during a pivotal moment of the round? I certainly can. 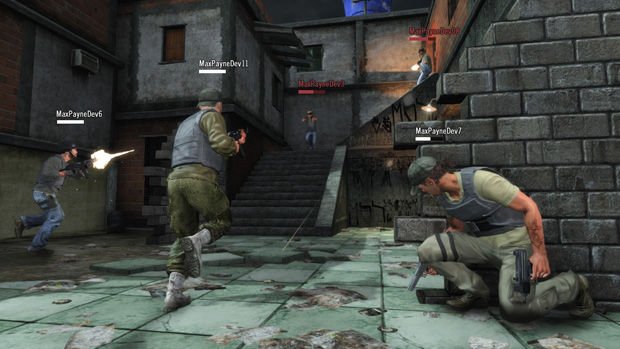 One particular multiplayer feature that I liked was the ability to create a “vendetta.” If a member of the enemy team kills you twice, without you killing them once, you can basically flip them the bird by forming a vendetta, which creates a large, distinguishable marker above their head, and also yields more cash for killing them. Unfortunately, I didn’t win a single goddamned vendetta, but I can imagine the enemy players got some joy out of my failure — and the bonus dough I granted them. I do love brightening up people’s already awesome days.

I have to give credit where it’s due: Max Payne 3 certainly does not feature your run-of-the-mill multiplayer. Its modes are fun and varied, it features more depth and variety than most people will probably anticipate (you can even completely customize your in-game model, hipster glasses included), and its gunplay is fast, frantic, and incredibly fun. I can already tell I’m going to enjoy multiplayer in MP3 just as much as I did in GTA IV and RDR.