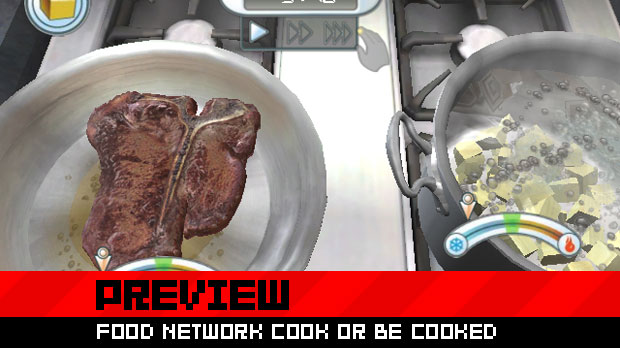 In a perfect world, either Dale North or Johnathan Ross would have been on hand to preview this game. Not because I didn’t think it was cool, but because all they ever talk about when we’re all together is food. And the Food Network. And shows on the Food Network.

But, hey, I like food. I eat it every day, and there may come a day when I want to cook myself something other than pizza rolls. I doubt it, but if that day comes this game will come in handy.

Hearing that there was a Food Network game at the Namco event sparked our interest. Food Network, what ever could this game be? Well, not too surprisingly the upcoming title, Food Network: Cook or Be Cooked, is a game that teaches you how to cook.

That’s basically the gist of the title, but unlike other cooking mini-games for the Wii, the Food Network and Red Fly Studio teamed up to make that will actually teach people how to make real life, usable recipes. With 30 actual recipes to choose from, the player is put into the kitchen and shown how it would be to make these meals by using a combination of Wiimote motions for slicing, dicing and mashing.

Taking directions from recipe cards that show you exactly when and how to prepare each ingredient, the player  then attempts to successfully make each dish. The dishes start of fairly easy and then progress to more difficult ones as you become a better cook. The general theme of the recipes in their first title are more of the “Americana, comfort food” variety, but possible later installment of the series will have different types of recipes for different styles of cooking.

Watching the demo, it appears that Cook or Be Cooked does a very good job of using the Wiimote and the Nunchuk to simulate the actual motions of using kitchen utensils. I mean, I love me some Cooking Mama, but I don’t think Mama will ever teach me anything valuable with her cute presentation.

With Cook or Be Cooked, though, players will have to actually multi-task like they would in real life, and how well you accomplish this feat determines how well you are judged upon completion. The graphical representations of the utensils and kitchen are all very well done, and at first I actually thought the game was for the Xbox 360 or PS3.

There’s also a competitive split-screen mode where you and a buddy can go head to head to see who is the better chef. Learning how to multi-task and prepare each ingredient correctly and in the right amount of time will lead to you culinary domination over your opponent. Overall, though, this game will quite a boon to most people, since most of the gamers I know still think that dinner comes from the frozen food section and is prepared in a microwave.

Dale and Jonathan will most likely be locked in a fierce cook-off battle with Cook or Be Cooked the next time we all hang out, which will leave me time to go heat up my frozen pizza rolls. Hey, I never said I cooked.