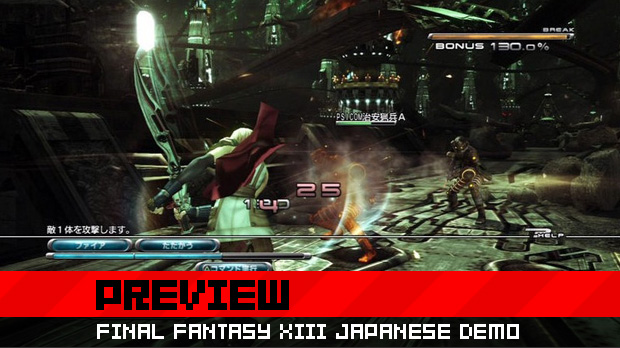 Final Fantasy. One that’s not a PS2 game. Going into my PS3. Finally.

Well, not finally finally. It’s not the full game yet. We’re talking about the Final Fantasy XIII demo packaged in with the Final Fantasy VII Advent Children Complete Blu-ray package, which was just released in Japan this week. We’ve put the demo through its paces several times now, and we’re ready to talk about it a bit.

So get ready for more weather-based names and swords and guns. And wispy hair. And birds that live in afros. Or is that one new?

Hit the jump to read our preview of Final Fantasy XIII.

First off, and you should expect this from Square Enix by now, the demo starts off with a pretty lengthy cutscene. I mean, it’s the series’ Blu-ray debut, and they want to show off that fancy 1080p footage, right? Well, in case you’re wondering, that opening cutscene looks absolutely phenomenal. It’s beautiful in high-definition. The web clips you’ve seen do it no justice, and even the final, super-polished version of Advent Children on Blu-ray that this is packaged alongside it does not look as good as the Final Fantasy XIII opening.

You’ll be pleased to know that the opening video is also quite entertaining, though it doesn’t give us much more than fast-paced action scenes. It sets the stage for what seems to be a war between two races of beings. Visually, Square Enix lets the cat out of the bag, giving us a really good idea of what the final game will look like. But as far as the story goes, very little dialogue and background detail really limit what we know about the storyline. It’s just enough to give players a taste of what to expect, much like the last few Final Fantasy demos released.

The game starts with scenes of a futuristic train gliding along tracks, with prisoners bound inside under heavy guard. Our heroes manage to break free and go up against the guards (who look like characters straight from Killzone 2), and this is where we get our first glimpse of Lightning, our pink-haired heroine. Oh, and Sazh, our afro-sporting friend of baby chocobos and supposed source of comic relief. Lightning kicks off some kind of sparkly superpower, does some fantastic flips, and manages to take down all of the guards. The train continues on and we get our first glimpse of a floating city, where spaceships buzz above and war goes all around. The whole scene reminds me of a futuristic Final Fantasy VII opening, but with the black guy looking way more wimpy this time around.

Here is where the demo transitions to a real-time graphical engine from the movie, as Sazh crawls out of the wrecked train and goes up against some long-tailed, train-crashing robo-beast. While not as beautiful as the Blu-ray footage, the in-game engine still impresses. The characters’ faces are smooth and detailed, and the shine on the enemy looks real. This is one of the better looking things I’ve seen coming out of my PS3, and this is just a demo! This first battle serves as the tutorial for the demo. You’ll take control of Lightning while Sazh takes on a support role.

The battle system is a new kind of adaptation of the Active Time Battles from the older series games. Enemies will attack you in real time, and you’ll respond in almost-real time with the attacks given to you in a menu. Each attack is given a cost number, which corresponds to a segmented meter that is constantly recharging. When the meter’s three segments are full, you can execute any combination of attack commands at any time you’d like, just as long as the cost isn’t greater than the amount of segments you have left in the meter. For instance, you can select a chain of regular attack, fire, and a launch attack, each costing one point on the meter. The three execute in succession when you hit the triangle button. Or you can select a bigger attack that costs the three points for the one move. Or, if it looks like the enemy has very little hit points left, you can just select one hit, costing only one point, to finish him off quickly.

I’ll admit that I didn’t think there was much to this battle system at first. Selecting attacks and watching them execute? That seems pretty boring on the surface, not to mention totally lacking in strategy. There had to be something more to this, right? It took me awhile to appreciate how simple and elegant the system could become, though. Some of it came together when I first hit an enemy soldier in the sky and then beat the hell out of him on the way down. That was fun.

Timing is key. Sure, you could mindlessly select attacks to execute, taking down enemies hit after hit. But things start to click when you see how attacks can be chained. All of the commands seem to move into each other, and if you’re watching the action bars of the other party members, you can gauge when they’ll be ready to attack. When done right, you’ll line up multiple attacks in a row. The goal here is to cause the enemy to glow red, which means that they’re more susceptible to attacks. Once they are red, be sure to hit them with a launch attack, which will launch them in the air and leave them ready to be finished off. A chain counter at the top right of the screen counts your successful chains, and a post-battle ranking system rates you on how well you performed in the fight. As I said before, it’s simple and elegant, and I can see how full-on battles with spells and techniques and such would be really fun.

The demo continues on with Lightning and Sazh taking down this training boss, fighting a string of battles with low-level soldiers, and then working their way across a bridge to a first boss. There are no random encounters, though. You’ll physically run into mobile enemies, transition into a fight screen, and then do your thing. In running across the bridge, there are some hotspots, represented by a ring of light. Having Lightning step on these causes her to jump across obstacles. Otherwise, you’re just controlling her movement and the camera with the analog sticks.

The first boss, basically a beefed-up solider with a spear, provided a bit of a challenge, but it was here that I first started to appreciate the chaining of attack commands. These battles are fast-moving, and you start to fall into this pace of watching everything happening on-screen and then making your move at the best time. Enjoyable is the word that first comes to mind. The battle system is not completely new, but somehow it manages to be fresh and interesting. On the flip side, I could see where a lack of explanation or exploration would have gamers thinking that the battle system is quite dull.

As the demo continues, you take control of another character, the charismatic blonde guy named Snow. He and two other party members, a sexy gun-toting female (the next Rikku, mark my words) and a red-headed brute, seem to be members of some resistance force. As you’d guess by his name, Snow uses ice attacks, replacing Lightning’s fire ones. They also work across a bridge-like scene, taking down similar soldier-type enemies, all leading to a final boss named Behemoth. Even with three party members, this beast is a bit of a challenge, especially if you don’t have the whole chaining system down. When you do take him down, the demo ends.

Presentation-wise, I was extremely impressed. Aside from the amazing video we mentioned earlier, the graphics, design, and art are also very good. While some of the enemies look like good ol’ Final Fantasy enemies (robo-felines, faceless foot troopers), the main characters themselves seem to stand out. Unlike Final Fantasy XII, this looks like a cast I would be interested in following. This is our first time seeing Final Fantasy in high-definition, and it’s just about everything I expected it would be. The game’s world has a shine and polish, and even the enemy character models impress from a technical standpoint. And the musical score is already ramping up to be something special. The title screen song is breathtaking, and the ones that follow in battle are orchestrated and lively, and definitely mark a new turn for Final Fantasy music. I can’t wait to hear the rest of it.

Aside from the battles, the demo itself isn’t much more than a barely interactive slideshow of what to expect in the final game. About half of your time is spent watching cutscenes, and the other half fighting those low-level enemies. In all, it’s about an hour’s worth of game play. It’s not worth buying, but definitely worth trying. I guess the best thing I can say about the Final Fantasy XIII demo is that I’ve played it several times, and I’m pretty excited to see the rest now. I just know they’re holding the best stuff back.

It’s probably too early to call, but I’m already expecting great things. The lack of…well, everything in the demo poses lots of questions, though. Where are the techniques and specials? How do you level up? Where the hell is my victory music? We won’t know until 2010.

Look, if you hate RPGs, you’re really going to hate this. But for Final Fantasy fans, I think this is something to look forward to. But what do I know? I liked Final Fantasy VIII.