My love for sports knows few bounds, and boxing is one of them. Say what you will, but watching two men beat the living daylights out of each other is just not something that appeals to me (and it’s not something I can stomach for long, either — certain scenes from films like Cinderella Man and even the Rocky movies make me wince). But that all gets thrown out the window when it comes to videogames because, well, who cares about virtual violence, right?

That said, I’ve (amazingly) never actually spent much time with any of the previous games in EA Sports’ acclaimed Fight Night franchise. (I generally find that I have to follow the sport in question in order to be interested in a particular sports game.) A couple of weeks ago, I got some hands-on time with Fight Night Round 4, the newest iteration of the series. So how would a Fight Night newcomer fare in a match against the game’s producer, Brian Hayes? Not too well, one might assume. But let’s not be too hasty — follow me to the jump for my impressions of Fight Night Round 4. 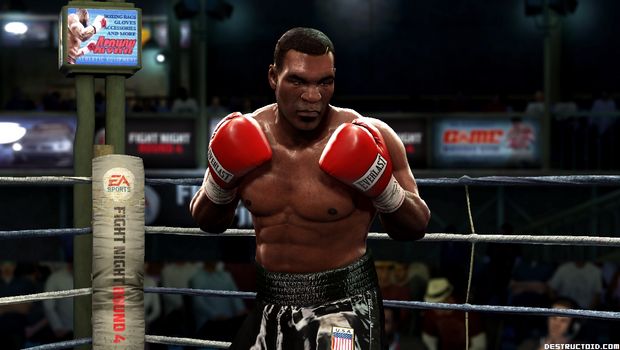 Many Fight Night fans took umbrage at a certain promotional video for FNR4, one in which Gameplay Producer Brian Hayes seemingly trashed EA Chicago’s highly praised 2006 effort, Fight Night Round 3. I specifically asked Hayes about the backlash, and he told me that he understood where the complainers were coming from. The intention of the video wasn’t to slam FNR3, which Hayes called “a great game … for its time.” In fact, he said, before EA Canada had a working build of FNR4 ready, they duked it out in FNR3 in the studio. But of course, three years is a lifetime in the videogame industry, and as Hayes explained it, the point of the video was to show off how far we’ve come since FNR3 (and specifically, all the improvements that have been made since then).

Those improvements are numerous and significant, and Hayes made sure to point them out during our fight. I picked Roy Jones Jr., and Hayes went with a southpaw, Joe Calzaghe. Since I wasn’t already familiar with the series, I didn’t have the added confusion of having to adjust to the game’s controls, which, I was told, have been tweaked somewhat from FNR3. The right analog stick is now split in half vertically. Body shots don’t require holding down a shoulder button anymore; instead, you just flick the stick downward (and to the left or right, depending on which hand you want to use). For a jab, go up and left or up and right. 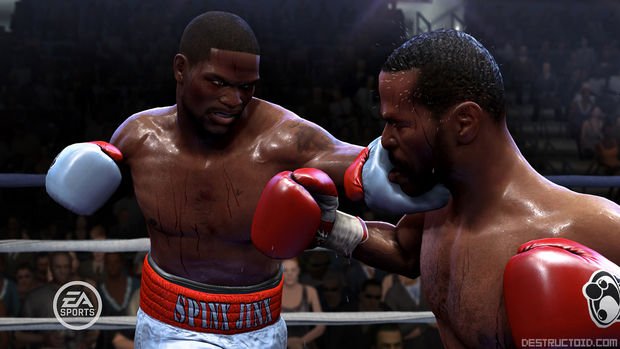 For a hook, you have to perform a quarter-circle motion to the right or left (90° to 0° or 270° to 0°). To throw heavy hitters like haymakers, R1/RB is used as a modifier for regular hooks and uppercuts. Meanwhile, the left stick controls your movement; by holding the left trigger and moving the left stick, you can bob and weave to avoid punches. The right trigger will throw up your hands to block — to block high, hold the trigger and move the right stick up; to block low, push the stick down. Of course, you can’t just block forever. There’s an on-screen meter, and it depletes as your opponent fires away. Once it’s gone, don’t bother blocking anymore.

It takes a bit of time to get the control scheme down pat, but it’s pretty intuitive, so I was able to learn the ropes within a round. Knowing I was a Fight Night first-timer, Hayes initially went easy on me. After the first round ended, I got to see the revamped corner game. It’s much more “gamey” this time around — instead of doing things like using the analog sticks to heal cuts, you accrue points by fighting well, and then you use those points to purchase healing items. For example, a small bag of ice costs 10 points, and a large one costs 40 points. You can also opt to skip healing altogether and save the points for later in the fight, when you might need them more.

When I asked Hayes why the corner game was changed, he cited the flow of a fight as the reason. While the mechanic in FNR3 might have worked better from an immersion standpoint, it was slow (players had to take turns), and it broke up the pace of the game. The button-press point bank setup in FNR4 is much faster — if you’re skipping to the next round, all you need are two or three presses — so it helps keep up the intensity of a fight. Unfortunately, all the bags of ice in the world wouldn’t have been much help to me against Hayes; I was done within three rounds. 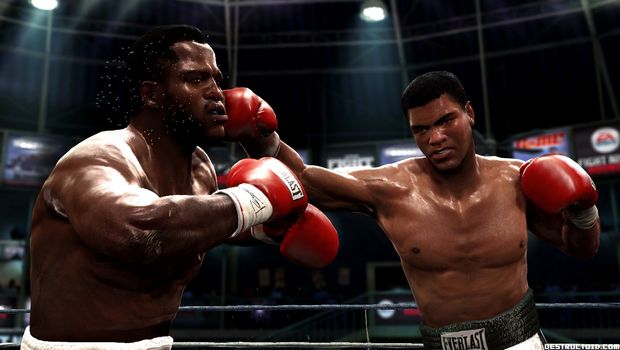 For a newbie, though, I guess that’s not so bad — especially considering the fact that I was going up against one of the game’s producers. And I did have one thing to be particularly proud of: according to Hayes, I was the only journalist all afternoon who managed to get up after being knocked down twice. There’s a new mechanic for that, too, and the controls are well-implemented. When you’re sent to the mat, a two-part meter pops up on the screen; it shows your balance and current height.

For example, if you’re lying on your right side, the horizontal meter will be all the way on the right, and the vertical meter will be on the bottom. You have to tilt the left stick to the left to begin lifting yourself up, and once you have your balance roughly in the center, you can start using the right stick to stand. This may sound easy, and indeed, it’s not too difficult to get up after your first fall. But it gets exponentially harder as the match wears on. When I was knocked down for the second time, getting up took a lot of skill with the sticks, and by the third knockdown, getting back up proved to be impossible; I was down for the count.

As you’ve surely noticed from all the screenshots that EA has sent out, FNR4 looks amazing. Let me tell you that it’s even more gorgeous in motion. The game’s all-new physics system takes the human body and its musculature into account — when a boxer throws a punch, you’ll see his back and abdomen tighten in accordance with, well, reality. Like Madden NFL 10, FNR4 uses a mix of motion-captured and procedurally generated animations, which results in some truly amazing situations. Before sitting down to play myself, I watched another journalist fight Hayes. The journalist threw a punch, and his arm got stuck between Hayes’ arm and body. At that point, Hayes’ opponent tried to wrest his arm free — and Hayes explained that the entire sequence was generated on the fly by the game. 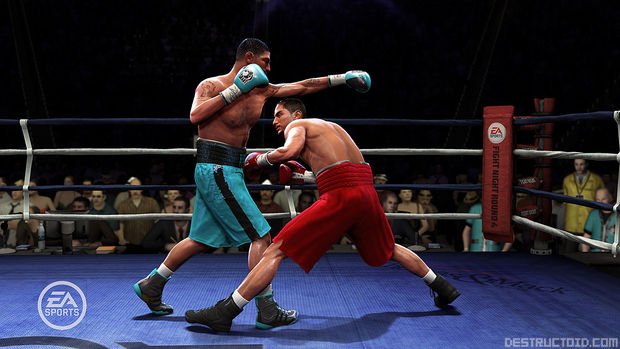 Another consequence of the game’s physics system is the elimination of the invisible wall between fighters. (Hayes said that without that barrier, boxers in FNR3 would have clipped through each other way too often.) Now, you can really get up close and personal to deliver a flurry of punches and then dart out of the way. The game is also much faster, and as a result, it provides a much more true-to-life boxing simulation. Whereas past games seemed more robotic, the gameplay in FNR4 looks and feels more like real boxing than ever before. This, too, is helped by the physics engine, which finally allows for glancing blows. In FNR3, you’d either hit or you’d miss. Now, punches can graze a chin instead of smashing into a jaw.

After having played the game for a short while, I can see why Hayes and the FNR4 team felt confident in putting out that controversial video. Fight Night Round 4 really does seem like it’s going to blow its predecessor out of the water, and frankly, I would expect nothing less from the folks at EA Canada.

Check out a “boxer styles” trailer below.