I got to fiddle around with Fate/Unlimited Codes this past weekend to bring you a preview. The short story? It’s not the most complex fighter around, but I’m having a good time with it. It’s a great on-the-go fighter for your PSP.

Read on for our preview of Fate/Unlimited Codes. 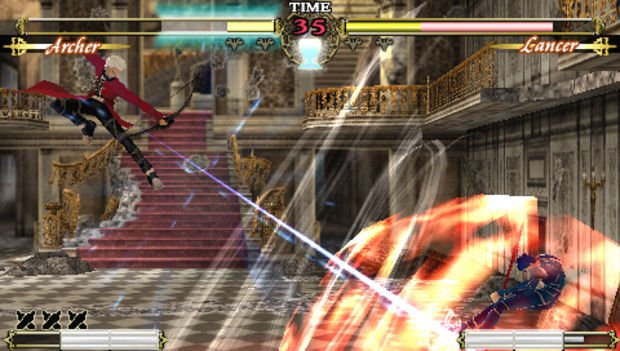 Let’s get to the fighting, skipping all of the backstory stuff. It doesn’t make much sense to anyone that hasn’t enjoyed the story from the anime Fate/stay nigth anyway. All you need to know is that there’s Masters and Servants, and they’re all fighting for the “Holy Grail” using weapons. The story unfolds as you progress through the battles with other characters, just like in many other fighting games.

Fate/Unlimited Codes is a very nice looking PSP fighter. Your characters are rendered in full 3D, as is the setting, though you’ll mostly be moving back and forth on a 2D plane. You have sword-wielders in poofy dresses, magical girls in short skirts, and studly archers being studly. Crazy Japanese cast? Check. Kind of like the PSP Bleach fighting titles, your characters are nice and large on the PSP’s screen, and each has a fair bit of detail to them. Hair animates and clothing moves as you do. Overall, Codes is pleasing to the eye for everyone, and a visual treat for fans of the series.

The fighting system is simple enough to pick up. There’s light, medium, and hard attacks to use, and combinations of these along with the reflect/guard button and d-pad make up the game’s moves and combos. Other combinations let you pull off a faux-3D parry into the back of the play field. It’s more of a dodge command than anything else, though. The moveset and combos are relatively simple, and comprise of multiple taps of buttons and d-pad directions. Some can be strung together, and the longer chains are very satisfying to pull off against an opponent. Of course, there are also a variety of flashy character-independent super moves to pull off, just as there would be in any modern fighter.  It’s not a deep combat system, but it’s definitely solid. If you were to play against another person (local wireless only), you’d definitely get some mileage out of this title. 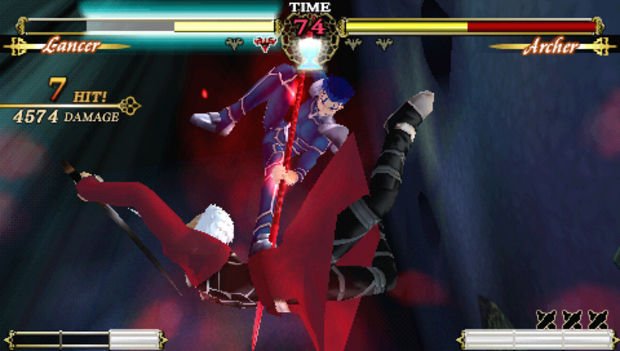 Single-player has a lot to offer as well, with its cast of almost 20 characters, more unlockables, and a ton of “missions” to accomplish. The only weakness to single-player is with the early battles in each story. Simply put, your opponents are gluttons for punishment. They’ll stand in place and take your beatings with little to no protest. For most of the stories I played, the action does escalate closer to the end, but it was kind of disappointing to see how easy it was to get to the boss.

Fate/Unlimited Codes is that perfect pick-up-and-play fighting game. It’s a perfect candidate for a Memory Stick download, which is exactly how Capcom is releasing it, on both the PlayStation Store and the PlayStation Network for $29.99.