It’s easy to look at Fallout: New Vegas and assume that it’s merely Fallout 3 in the West instead of Washington, D.C. But while New Vegas is the same type of game, and it’s running on the same engine, and you’ll be doing a lot of the same kinds of things you did in Fallout 3, making that assumption is not only selling the game short — the assumption doesn’t really hold up at all.

At a preview event last month in New York, Jason Bergman — a senior producer working on the game at its publisher, Bethesda Softworks — handed me an Xbox 360 controller and gave me free rein to roam around in a beta version of New Vegas. He also answered the many questions I peppered him with, including a number of questions comparing this game to Fallout 3. His responses indicated that, aside from using the same engine, New Vegas couldn’t be more different from its predecessor.

[Editor’s note: I will be discussing the very beginning of Fallout: New Vegas, so if you want to go into the game without knowing anything about the opening of the story, well, you’ve been warned. –Samit] 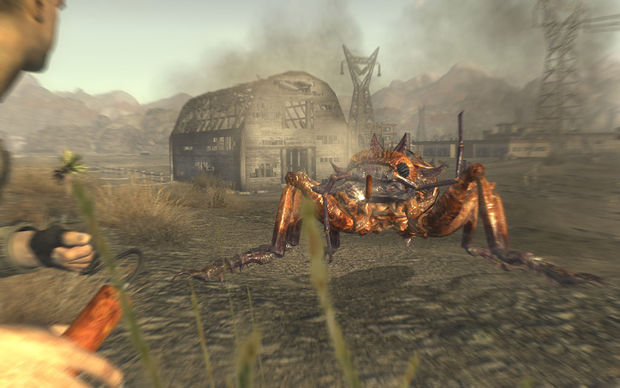 Fallout: New Vegas takes place in 2280, three years after Fallout 3, on the opposite side of the country. But in a post-apocalyptic America, explained Bergman, “News travels very slowly, so there aren’t really very many direct connections to Fallout 3.” That’s liable to be the case when nuclear weapons take out much of the country — although two of the locations that seemingly lucked out were the Hoover Dam and New Vegas. Why weren’t these places bombed? How is the dam still running? The Hoover Dam is the backbone of the storyline in New Vegas: the keys in this world are the dam and the New Vegas Strip, so whoever controls them has the power.

The story structure is one of the main differences between Fallout 3 and New Vegas. There was only one main story in Fallout 3; it could go in a few ways, depending on your Karma, but you were hitting the same story beats. New Vegas has a much more non-linear story, and you determine how it plays out. About halfway through, the game presents you with a few “very different possibilities”: you can side with one of two factions, Caesar’s Legion or the New California Republic, or with Mr. House (he’s the overseer of New Vegas; this is the independent route). You can also go against Mr. House and still be independent, “so it’s four paths, but [really] more like three and a half.” There’s some overlap between the paths, but each one has its own unique quest, and “the order in which you do everything is very different depending on which route you go down.” 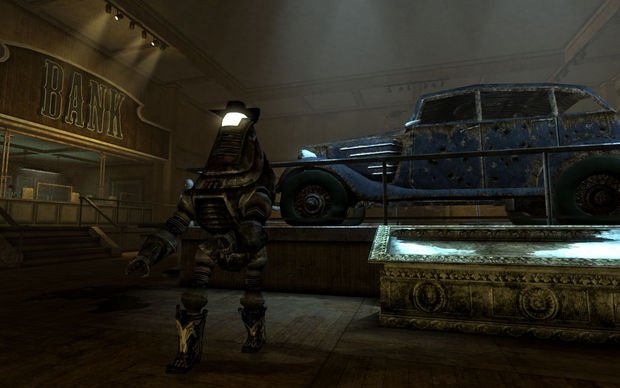 You play as a courier in New Vegas, and as the story opens, things aren’t looking bright. You regain consciousness in front of three mean-looking men, and one of them explains your fate:

You’ve made your last delivery. Sorry you got twisted up in this scene; from where you’re kneeling, it must seem like an 18-carat run of bad luck. Truth is… the game was rigged from the start.

Then he shoots you in the head, and his friends start shoveling dirt onto your body. The next thing you know, you’ve awakened in a dingy house, where the kindly old man sitting in front of you introduces himself as Doc Mitchell. He rescued you from your shallow grave after the gang left you for dead, and nursed you back to health.

At this point, you build your character’s identity — you’re not a vault dweller like you were in Fallout 3, so you can pick your own age here. After I made myself Hispanic (he looked more Indian than the “Asian” choice did), I named my character “Sam” and set my S.P.E.C.I.A.L. abilities. Next, Mitchell asked me some psychological questions, which, as Bergman explained, basically serve the same purpose as the G.O.A.T. from Fallout 3 — the answers determine what kind of player you’ll be, and the game suggests a skill allocation based on them. Of course, you’re free to ignore it: the game thought I might like to focus on Melee Weapons, but I decided to put more points into Guns (a skill into which Fallout 3’s Big Guns and Small Guns were merged) and Science.

Many Obsidian employees are former members of Black Isle Studios, the developer behind the first two Fallout games, so they brought back Traits from Fallout 2 for New Vegas. They’re entirely optional — you can choose none, one, or two — and most of them have some positive and negative effects. For example, Four Eyes gives you a +1 bonus to Perception as long as you’re wearing glasses; without glasses, it’s -1 Perception. Wild Wasteland brings back the humor that was in Fallout 2 — if you choose that Trait, you might run across a refrigerator outside of Goodsprings with a fedora and a whip inside. 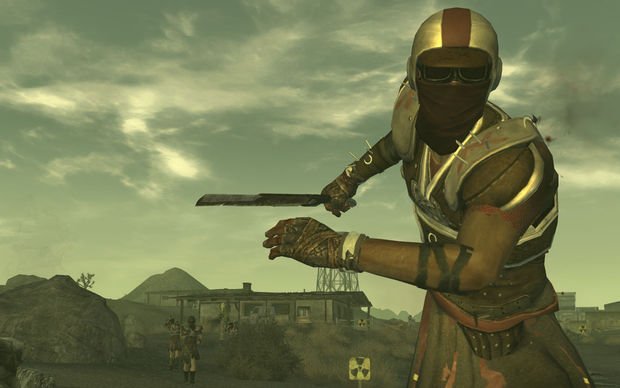 After I had set up my attributes, Doc Mitchell — who lived in a Vault as a child — handed me a Vault suit and a trusty Pip-Boy. Before I left his place, the game asked me if I wanted to enter Hardcore Mode. I declined, but according to Bergman, about half of the game’s QA testers are playing in Hardcore Mode. Mitchell suggested that I visit Sunny Smiles at the local saloon to learn some desert survival skills, so I did. She brought me out back to practice shooting at sarsaparilla cans, and then asked me to come along with her for some gecko hunting.

I asked Bergman about the first- and third-person cameras in New Vegas, because I found the weapons in Fallout 3 to be mostly useless unless I was in V.A.T.S. (the game’s non-real-time targeting system). He told me that Obsidian re-balanced all the weapons so that they work better outside of V.A.T.S. — in fact, guns in New Vegas have iron sights, a feature that modders had to add to Fallout 3 on the PC. “We wouldn’t claim it’s a first-person shooter, but it’s definitely a lot better than it was [in Fallout 3],” said Bergman. In addition, Obsidian tweaked the third-person camera to be “more useful,” although the player character’s walking animation still “slides” around the world.

The geckos were more difficult to kill than I had anticipated — perhaps due to the crappy hunting rifle that Sunny had given me — and Sunny ended taking out most of them herself. I then decided to wander off into the world, but as I was leaving the town of Goodsprings, the game asked one last time — just like Fallout 3 did when you left Vault 101 — if I wanted to change Sam’s skills and attributes. As I ventured off into the wasteland, I asked Bergman to comment on setting and tone of the game. 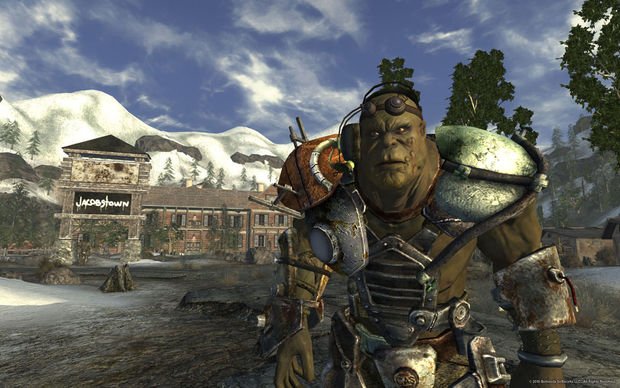 He noted that New Vegas has “a very different feel from Fallout 3.” This game has a much more warm color palette — Fallout 3’s Capital Wasteland was a bleak, “almost monochrome” world, but New Vegas features blue skies and the array of colors that you would expect to see in the American West. I thought of Red Dead Redemption as Bergman told me that the sunset in this game is “very red.” Another effect of the Nevada setting of New Vegas is that the game is much less urban — “while we do have cities, they’re kind of smaller,” explained Bergman, noting that “Nevada is very spread-out.” Not only is the world of New Vegas more colorful, it’s more varied: “We have a lot of deserts; we have a lot of canyons; we have valleys; we have mountains,” said Bergman.

In my travels, I came across some bandits who killed me. Here, Bergman told me about the morality system in New Vegas — or, more accurately, the lack thereof. Fallout 3 may have had a much more gray world, but the morality in New Vegas is much less black-and-white. “You can say the [New California Republic is the ‘good path’] and Caesar’s Legion is the ‘bad path,’ but the NCR is going to ask you to do some really nasty things. So the NCR is — they’re better than Caesar’s Legion in some regards, but they’re much, much worse in others. […] Like, if you wanted to play this [on] the complete ‘good’ path, [you’d] have to make some hard decisions.”

Along those lines, “Karma has been kind of abstracted,” said Bergman. There aren’t good, neutral, and bad levels of it, and people no longer react to you based on it. Instead, the Reputation system is a replacement of sorts for Fallout 3’s Karma. As you progress, you get Reputation meters with each of the game’s major cities and factions. So if you have a bad Reputation with a particular city, the people there will treat you badly. “They don’t care what your Karma is — Karma is more how you see yourself; Reputation is how other people see you,” Bergman explained. The Reputation meters will show up on the world map, so you’ll be able to keep track of them easily. 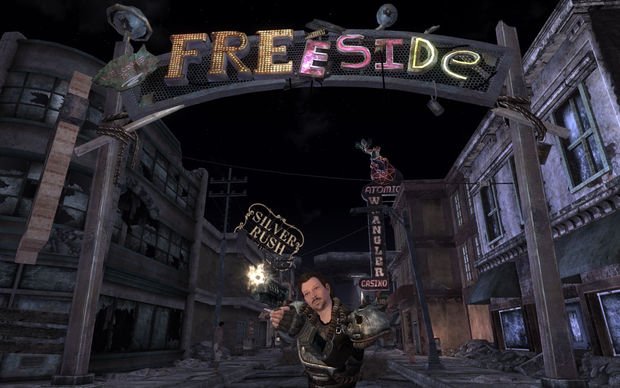 The communities in New Vegas are “more functional” than in Fallout 3, but they’re not exactly well-off. You’ll be able to see how they’ve been living — some get by through tourism; others subsist by scavenging — and one of the ways in which you build up your Reputation is by helping people do what they need to do in order to survive. A few places are even able to grow crops. That’s right: there’s real, living vegetation in New Vegas; I saw some plants and thought of Galaxy News Radio’s Three Dog, who asked in Fallout 3, “Have you guys and gals ever seen…a tree?” You can pick plants for the game’s crafting system. According to Bergman, it works like Alchemy from The Elder Scrolls IV: Oblivion — at any campfire, you can cook and make things like poisons and healing potions.

If you loved the music in Fallout 3, it’s back — and thankfully, there’s more of it. Each of the themed casinos has different background music, and the game features two radio stations: one plays country music, while the other sticks to the popular music of the 1950s. I didn’t make it to the New Vegas Strip in my forty or so minutes with the game, but I could already feel myself getting engrossed in the world, just like I did with Fallout 3. “We really wanted it to be a standalone game,” Bergman told me; so far, New Vegas looks to offer a very different experience — albeit one that could be just as engaging.