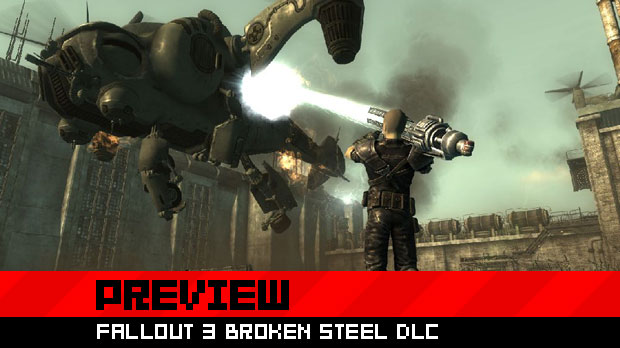 Set to arrive in just a few short weeks is the latest in downloadable content for Fallout 3, the third DLC pack, called Broken Steel. Bethesda let us take a peek at the game during a visit to London a couple of days ago, and what we saw will surely have fans anxiously waiting for the May 5th release date for Xbox 360 and PC.

You’ve probably heard one of the most notable aspects of Broken Steel already: the level cap now extends past level 20 in this update, going up to 30. But it won’t be an easy 30, especially in that last stretch, as Bethesda’s Pete Hines makes it clear that gaining those last ten levels will be more challenging, especially with the new high-level enemies that start to appear after level 18.

“Every time you level up one level, the number of experience points you need for the next one keeps going up and up by a pretty large factor,” Hines says. “We really want folks to be able to play this a ton before they ever get to level 30.”

But you’ll be so busy doing everything else that you won’t have time to worry about your levelling. Read on to see what you can expect to do and see in Fallout 3‘s DLC, Broken Steel.

The storyline isn’t some sub/side-story like the other two Fallout 3 DLC packs were. Broken Steel takes place in the Capital Wasteland, set at the very end of the main quest. It actually changes the end of the game, meaning that the game does not end anymore. You now also have several companions you can send in the reactor for you in your stead. Hines says that they “got the message” about endings.

It all kicks off as you wake up in the Citadel two weeks after the normal story ending. The setting of the game has changed according to this time line, and this affects everything you’ll encounter in the game, old and new. For example, Project Purity is now functional. Water is good.

Get in. Go ahead.

To start off, you’ll be working for the Brotherhood to find all the pieces of a new weapon, the Tesla Cannon. In an overview, we were able to check out the beginnings of a quest for the first part of this weapon, a tesla coil. This goes down in a new location, an old power station called the Olney Powerworks, where you’ll be working to take down some of the first of the newer, tougher enemies.

Eventually you’ll continue on with this new, powerful weapon to take down the Enclave strongholds. You’ll set out on a quest through the old Presidential Metro Line under the White House to an enemy base, and then move on to a whole new area called Adams Air Force Base. While we were only able to see a brief glimpse of this new area, Hines says that it’s a pretty big space that you’ll be spending plenty of time in. This is a new world space that does not exist within the Wastelands.

Naturally, as we said before, this Tesla Cannon will be a usable weapon. It fires beams of electricity. I didn’t get the full scope of its power until a bit later, where we witnessed aircraft being blown up in the sky from a single shot. Glorious explosions. As far as other weapons go, we learned of the new super mutant Overlord’s Tri-Laser, which you can nab for yourself if you can manage to take him down. There’s also a new flamethrower that we look forward to seeing more of, called the Heavy Incinerator. Instead of a stream of fire, it shoots a sort of longer range fireball-ish projectile. Fun.

A new Perk involves Dogmeat, who now can be reincarnated through “Puppies.” When Dogmeat dies, he comes back as a puppy that you can go back and get. This is supposed to help you out a bit with the increased difficulty that we mentioned above. From what we’ve seen so far, you’ll need all the help you can get!

Broken Steel gives a new main quest, a bunch of free-form game play, 10 more levels to acquire, new perks, new Achievements, and the removal of the end of the game, letting you continue in the Fallout 3 world to your heart’s delight. That’s at least five more hours of game play just for the main part. All of this for only 800 Microsoft Points? From what little we saw, $10 sounds like a bargain. Even then, I know we didn’t see the half of it. Ultimately, this is the type of DLC we can get behind.