I’ll be real, when I first heard about Fairytale Fights a few weeks back, I thought it was some Xbox LIVE Arcade game appealing to people who think Celebrity Deathmatch is funny. I mean, come on, it’s not like there was that much known about the game. Hell, the original press release for the game made it seem like a brawler (at least to me), thus the Celebrity Deathmatch reference.

However, to my joy and delight, Fairytale Fights is a much more complex and interesting game. First of all, it’s not some blasé Xbox LIVE Arcade game, or some backwater PlayStation Network title coming in at 36 megs. No, no, no! It’s a fully-featured Xbox 360, PlayStation 3, and PC game. And it actually looks pretty interesting.

Sure, the juvenile humor I expected is there… in spades. Cuteness contrasted with substantial gore is always going to be funny to a certain sector of the market. However, it really looks like our Dutch friends at Playlogic are really working hard to Fairytale Fights something a little bit more substantial.

Hit the jump for my hands-off impressions.

First of all, I want to talk about the graphics of Fairytale Fights. Everything is so damn bright and colorful. Each level is based on an original folktale, and many levels share the idea that everything is made out of books. The houses are books, the pathways are books, and the bridges are books. Hell, even the leaves falling from the trees are pages from a book. It all comes together for an aesthetic that reminds me of Viva Piñata, and everything is very cartoony, with inspiration from Ren and Stimpy and Happy Tree Friends.

All of the characters in the game, from the Red Riding Hood and Snow White playable characters, to the obese children tossed into the acidic soda pop, are all over-the-top and goofy. This is in perfect contrast to the ludicrous gore. 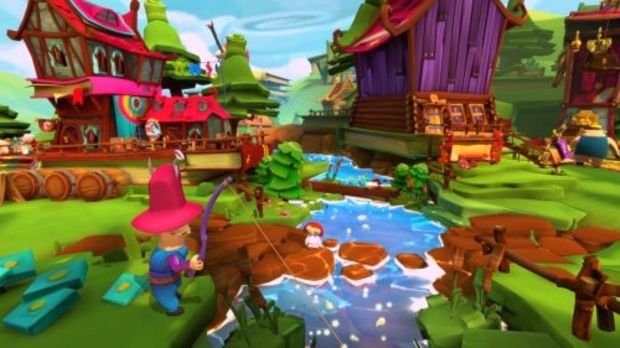 And there’s a lot of that. Littered throughout the levels of the game (all based on endearing childhood fairytales to boot) are hammers, wands, knives, guns, axes, and lots more to hack ’n’ slash through enemies, as well as gruesome environmental hazards to brutally mutilate folkloric traditions. This game is very, very gory.

Playlogic has built in every character a real-time skeleton, which is important for what Playlogic is calling the game’s “Salami Violence” engine. While fighting with a slicing weapon, players can enter into a zoomed-in screen of the fight. Using the control stick, they can slice the enemy anyway they want. If you cut the head in half, a brain will plop out and you can see the skull and spine, or if you cut the friendly lumberjack in half, you can see his rib bones. 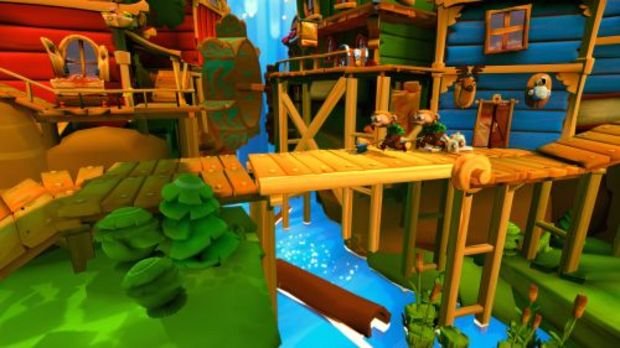 Interestingly, all that blood plays a role in the game. As it pools, the levels become slippery, and if the character steps in it, the footsteps afterward will be bloody as well. Especially cool is how throwing a potion onto the blood, like the yellow acid, the liquids will mix on the ground, creating new colors. It certainly looked fun. Considering that Fairytale Fights is running off the Unreal 3 Engine, this game had better look good to.

As for gameplay, it looks like Fairytale Fights is a fairly standard side-scrolling hack ’n’ slash. You pick your character, and run around trying to re-establish your fame within the fairytale community. Apparently, there are going to be a fair number of characters to play as, along with more after the game is released by way of planned downloadable content. It’s hard to gauge how much fun is had with Fairytale Fights, since I didn’t get to play it, but it looked like the devs were having a good. 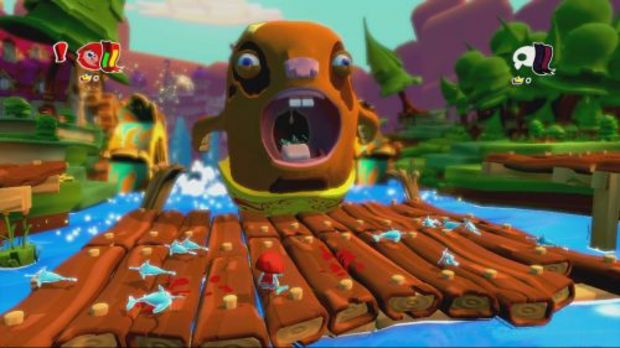 However, the multiplayer looked like fun. It supports both online/offline Drop-In Drop-Out multiplayer for both the Story Mode and the Smash Bros.-like PvP arenas, with support for up to four players.

Ultimately, I came away with a game that has my attention. Sure, it’s not going to be the most groundbreaking game on the market, but it’s funny and colorful. The game is twisted, and the basic mechanics seem solid. Once we get a hands-on, we’ll be able to make a better judgment.