The last time I saw Fairytale Fights, I was surrounded by business types in a small room at E3, where I was the only member of the press. Weird to say the least, I was at least able to catch an early hands-off look at the game. Well, it’s been a few months, and Playlogic has gotten farther along on the game — so much so that they were ready to show the game off.

Even better, now that Playlogic has announced the release date for the game, as well as the final two characters for the game, Jack and the Beanstalk and The Naked Emperor, there’s a strong sense that things are building up for Fairytale Fights. For those lucky ducks going to PAX, you’ll get to check out the game yourselves. Everyone else? Hit the jump for my hands-on impressions. 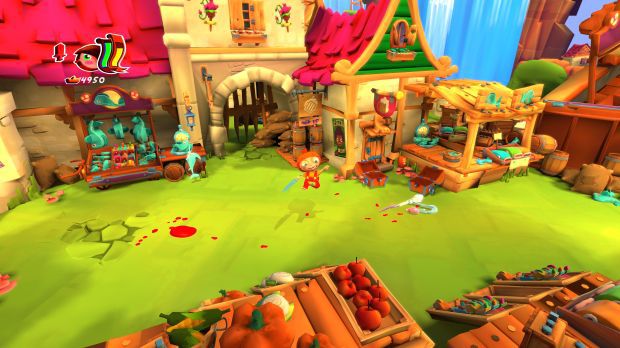 Last time I saw the game, one of the primary facets of Fairytale Fights that I liked a lot was the art direction. This is a very colorful game, with lots of bright and super-saturated elements to keep even the most ADHD-afflicted kids interested for a while. While it’s cute and cuddly, the gore factor has been taken up a notch, with even better blood physics, and special attention has been paid to the liquids in the game.

I had mentioned last time that the weapons in Fairytale Fights are a big deal, and now it’s even more so. There are over 140 individual weapons to play with, from gnomes to magic wands that transform enemies into objects. There are one-time-use weapons, too, like acid and healing potions. And the “glory” attacks have been beefed up, as every weapon can be used to perform brutal special attacks, like potion usage to kill everything on stage, or using a knife to enter the zoomed-in state, where your character can slice up an enemy. This has been updated with “Dynamic Bone Crushing,” so you can now zoom in and bludgeon cute fairytale figures. 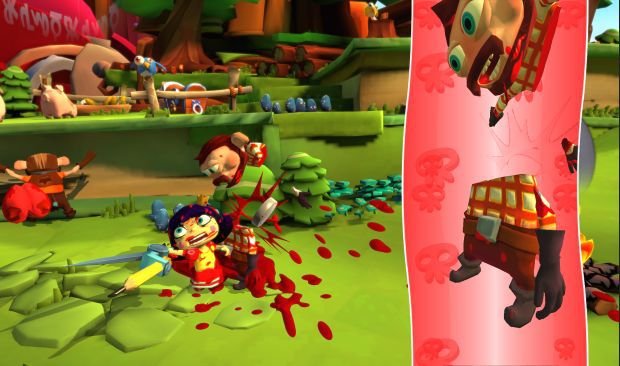 Previously, I didn’t get a chance to actually play the game, but this time I got a full hands-on. While this is a hack-n’-slash, it controls with attacks assigned to the right stick. Actually killing dudes is pretty satisfying, and it doesn’t get much better than fighting gingerbread men and fat kids trying to eat a candy castle. As far as the fighting goes, Fairytale Fights feels like a fun, albeit mash-happy, hack-n’-slash.

For people interested, the character cameos in Fairytale Fights are great. Obscure figure Little Boy Taylor is stealing all the glory our Fairytale heroes would normally get, so they have to go back and regain the attention. While our four main characters are going on this adventure across 20 levels, they’ll come across a drunken Goldilocks, the Little Mermaid being served up in a fishy dish, and the Three Bears working a bar, among others. It’s fun, and there are a lot of small details for people with sharp eyes. 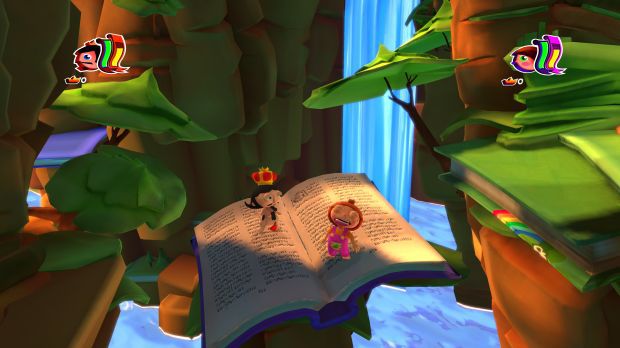 Multiplayer seems pretty solid, and with the promise of more DLC, which will include more PvP arenas, more weapons, and possibly more characters, it looks like there’s going to be a lot for people who really like the game. Expect these “expansion packs” sometime shortly after launch.

There were two pretty big flaws I saw so far. First, I felt that the controls in Fairytale Fights need a lot of tightening. While they work great for skating on blood, the generally floaty controls meant that I, and the developer playing with me, would die repeatedly in the same exact spot. When platforming is pretty important for a game, you had better make sure getting through a level is spot-on. Picking up weapons, too, was frustrating, as you needed to be in the exact spot, and when the camera would back up, I had difficulty with getting just the right item. Hopefully this can be dealt with. 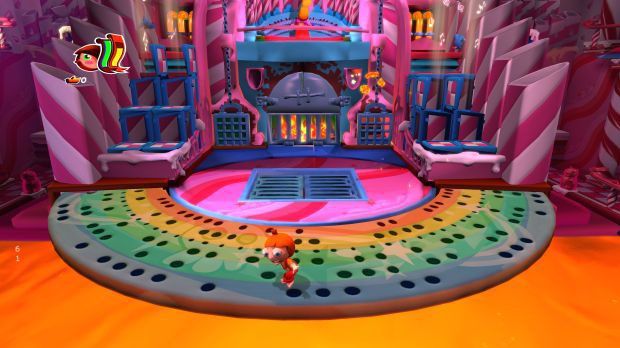 Another issue was that the game, especially in the Giant’s House level, can be fairly dark. This can partially be blamed on my, ahem, ancient SDTV, but consider this: all games should be able to work on a TV as crappy as mine. The darkness made platforming much more of a chore, and distinguishing the player characters can become frustrating. They have a way of looking a lot alike, especially when the levels pan back. While I like the UI updates, maybe character indicators would be nice.

Thankfully, it seems like the guys at Playlogic are aware of these issues. I was told that the darkness would be worked on, and it looked like the controls were being worked on as well.

Ultimately, like I said before, Fairytale Fights seems like fun. I wouldn’t call it the most groundbreaking game, but there’s a certain sense of style and charm to it. The acceptance of gore to the cute-and-cuddly is always a delight, and while I criticized some important issues, hopefully they can address them a bit before the October 27 launch date.