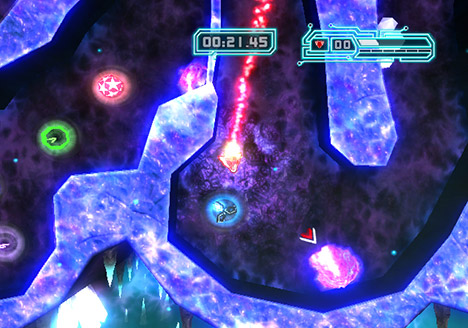 As Jim and many others have noted, WiiWare hasn’t exactly taken the world by storm. A few early games like LostWinds held immense promise for the service, but since then, quality WiiWare titles have been like diamonds in the rough. High Voltage Software, developer of the highly anticipated upcoming Wii-exclusive FPS The Conduit, is trying to change that with a slate of WiiWare games due out early in 2009. One of them is Evasive Space, a Wii Remote-controlled title that’s being published by Yuke’s.

I had the chance to check out a preview build of the game yesterday in New York, and it certainly looks like it could be the next “diamond” for the Wii’s downloadable game service. Hit the jump for more details.

[Update: This preview originally said there were two types of levels; there are actually three. The article has been updated to reflect this. –Samit]

At first glance, Evasive Space may look like a shooter, but as the PR rep explained it to me, it’s actually a “space adventure.” There’s actually a story involved — you play a female protagonist (à la Samus) named Konki, Stellar Guardian, who’s trying to restore light to the universe after Dr. Dark Matter and his minions stole the Constellation Stones that make up the heavens. In other words, it’s pretty standard fare, but the game itself is anything but. 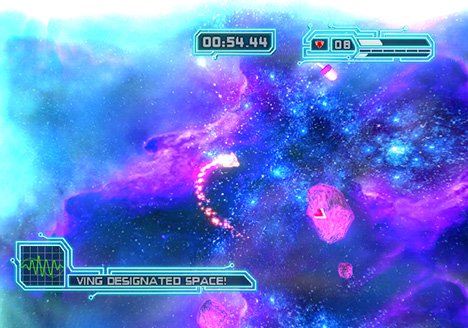 The name of the game here, as you may or may not have guessed from the title, is evading … things. Instead of firing blazing lasers or commanding missiles, you simply steer Konki’s spaceship through the game’s 20 levels with nothing but the Wii Remote. The controls are magnificently simple — you just point the Wiimote in the direction you want to go; the B trigger is your gas pedal. Since the game consists nearly entirely of avoiding obstacles, the controls obviously need to be highly responsive, and High Voltage has definitely nailed that aspect of the experience. Most of the time, if you don’t make it through a particular scene, it’s your own damn fault.

There are three types of levels in Evasive Space: most of them are mazes, but mixed in are a number of zero-gravity asteroid belt stages (some are in open space, while in others, the screen rotates). All the levels are timed — though, in a design decision that I don’t quite understand, it’s elapsed time instead of remaining time. [Update: I’ve since been told that High Voltage went with elapsed time to make the online leaderboards easier to read.] At the start of a level, some small scrolling text in a corner will tell you how much time you have, and you’ve got to just remember that time period. The screen will flash red when you’re low on time, though, so at least there’s that. 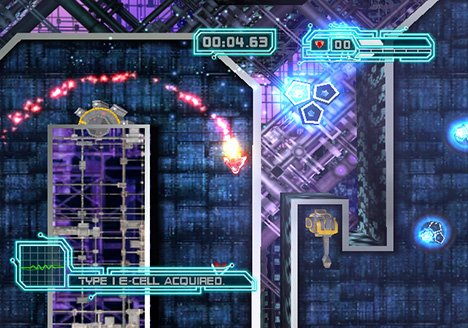 You simply have to get through maze levels in the allotted time. But each maze contains one or more of the aforementioned Constellation Stones, and if you don’t pick them up, the portal at the end won’t be there. Your ship has an energy bar, which can be filled by picking up energy cells. Energy works like rings in Sonic games — without it, you’ll die if you hit something (or are hit by something). Included under the “something” category are weapon fire and obstacles like crystals, worms, and walls — that’s right, you can’t touch the walls in Evasive Space. After a hit, your ship becomes momentarily incapacitated, and there’s a retention time of about two seconds before you’ll be able to move again.

In some of the asteroid belt stages, the screen is constantly rotating slowly; you have to keep pace with it, or you’ll die. In others, it’s just open space with asteroids sitting around. Here, you just have to pick up a certain number of energy cells within the time limit. It sounds much easier than the mazes, but things are complicated by two factors. Obviously, there are asteroids to contend with — they’ll definitely slow you down. Secondly, since there’s no gravity, it’s much more difficult to make your way through the levels. The key is to use your booster sparingly, lest you veer off into space (or an asteroid). 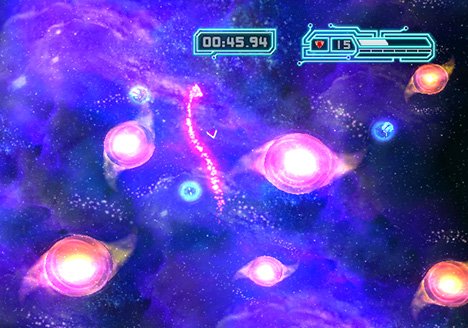 Your life is made easier by power-ups, such as “chromospheres” (they give you more time) and diodes. They’re used for upgrades like speed and acceleration boosts, and a shield that makes you temporarily invincible. I only played through the first act, but by the time I got to the later scenes, I had to retry them multiple times. Difficulty-wise, the game definitely has a very retro feel to it — it’s likely much too hard for the average Wii owner.

Be sure to keep an eye out for Evasive Space — it’s set for release on WiiWare on January 15th for 1000 Wii Points.