Entering the MMO market nowadays is always a risky venture. They’re expensive to make, expensive to keep running, and you have to attract loads of people for it to work. I mean, anything that is not World of Warcraft is going to struggle a bit to gain foothold in today’s crowded market.

And to come out with a free-to-play MMO that intends to be as fully featured as a game like World of Warcraft? That’s just crazy talk! However, Perfect World Entertainment is talking crazy, as they are working to release MMO Ether Saga Online to Western audiences, a stylized and cartoon-y prequel to the Journey into the West, a Chinese folktale.

This is a pretty ambitious attempt to make a free-to-play MMO experience that is great without subscription costs. Can it be done? I can’t answer than. But I did get a chance to check the game out, so hit the jump for my impressions. 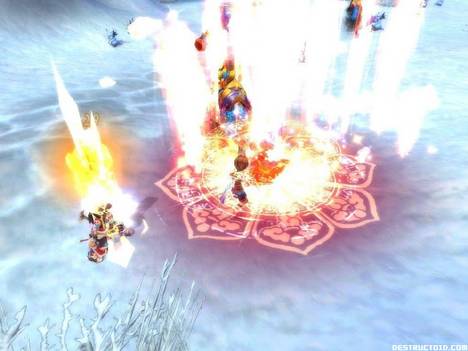 Starting off, there are three different races in Ether Saga Online. There’s  the Renzu, which is the basic human race. Then there are the Shenzu and Yaoh, which are demi-god and animalistic races respectively. Honestly, each race looks pretty much alike with some minor style differences. Mostly, what race you chose will just give you different quests.

For those who care, most of the game is PvE. However, Perfect World Online intends to release a PvP area in the future. When this happens, characters below level 40 cannot be killed, but can only enter duels. After level 40, then can they enter PvP proper. Which is good for those who reach the level 90 cap.

Joining a clan in the game can get you stat boosts and extra skills. This doesn’t seem to play such an important role as most other MMOs, but you will be gaining certain stat boosts and skills for teaming up. While most of the game can be completed solo, joining up with up to five other people to finish an instance will make completion much faster.

There is a very robust pet system at play here, and they are actually a very important part of Ether Saga Online. Since Ether Saga Online is designed as an entry-level MMO for casual gamers or for people looking to break away from the intense grind of other MMOs, most of the game can be completed solo. 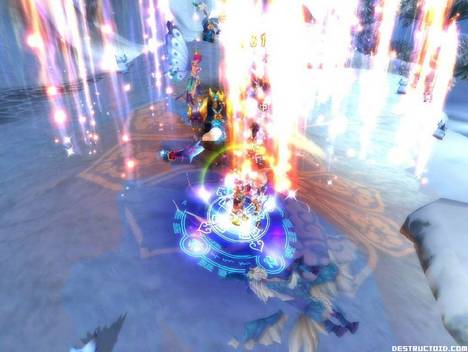 But to do that, they need their pets. Basically, most every enemy in the game can be captured, and, once under your control, they will fight along with your avatar. They each have their own character stats, as well as weaknesses. It’s a lot like Pokemon, and thankfully each one is unique and interesting. For example, I like the anthropomorphized furnace with its grumpy face.

There’s still more you can do with pets. You can fuse two separate pets into one new pet with all sorts of status affect boosts, although you’ll have to level-up the new born pet. Another thing is that your character can actually fuse with pets, which gives your character stat boosts.

Separate form pets, you can gain enemy cards from dudes and beasts you defeat. With these, you can actually transform into that beast, gain stat boosts, and have no impact upon your avatars skills. Truth be told, it’s an aesthetic affect mostly, so you can be sure to see lots of people running around as these creatures, just for the fun of it.

Perfect World Entertainment is really trying to make the game as full featured as any subscription-based MMO. There are seven total instances, two of which are end-game. There are a total of 2700 individual quests and 12,000 total including sub-quests, and since the original Chinese release of the game, there is a world size that Perfect World Entertainment considers three-quarters of pre-Lich King WoW. That’s not bad.

As for art direction, basing a game off Journey into the West could go a couple of ways, but Perfect World Entertainment has gone for a bright and colorful anime style. It actually looks pretty great, and while this game isn’t sporting Crysis-level graphics, Ether Saga Online has a really nice clean style that is vibrant and cartoon-y. The character models are far from ugly, and the pets each look unique and stylized. 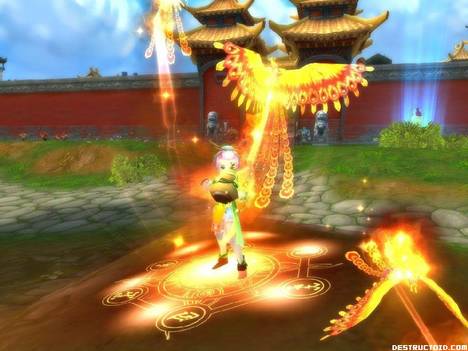 Finally, since this is a free-to play MMO, they want to get your money. From what I saw, most of what they will be offering for people to buy in real world money is what Perfect World Entertainment calls “bling”. Bling is clothing options you can deck your avatars out in addition to the stat changing armor. If you really want to get a badass ranger or a super-kawaii mystic, you’re probably gonna want to lay down some cash.

Same goes for mounts.  If you want to get some sweet flying mounts — like a steam punk copter, or the badass robotic ostrich — that’s going to cost some money.  Double that with consumable items you can purchase, Ether Saga Online has plenty of things for you to buy within the game.

So will Ether Saga Online be the next big thing? Who knows. But one thing I can say is that it is a game that has a neat colorful style with a pretty casual friendly attitude. Plus, it doesn’t take itself too seriously, which is always a plus in my book.

Closed beta is going on right now, with an open beta that begins on March 2.