Poor Pigsy. The squat, corpulent sidekick from Ninja Theory’s Enslaved: Odyssey to the West is so lonesome out there in the wasteland. “Pigsy’s Perfect 10”, an upcoming downloadable add on for Enslaved, is his story.

Relegated to a supporting role in the game’s main campaign, “Pigsy’s Perfect 10” brings the salty chubster into the spotlight. Looking for companionship, Pigsy embarks on a quest for parts to build himself a friend. Namco Bandai recently sent along some early preview code of the new content, giving us a sneak peek at what’s in store. 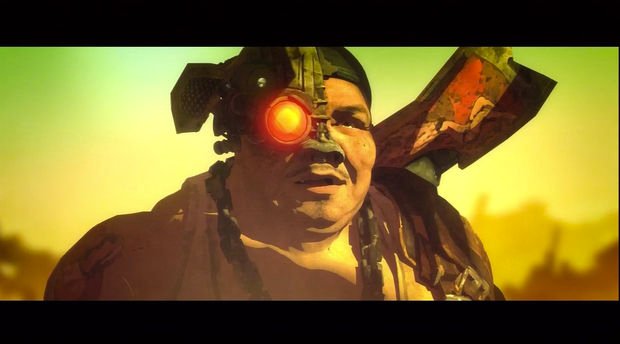 From the start, you really get the sense that Ninja Theory has gone out of its way to give “Pigsy’s Perfect 10” a different vibe than the on-disc adventure. Visually, it’s still very much the wasteland you remember, with mountains of scrap in place of structures and overgrown vegetation overtaking the environment. It’s really the tone that sets it apart. The game’s music is all new, with a laid back, almost whimsical bluesy-vibe, once again composed by Nitin Sawhney. The cut scenes also take a slightly different approach, with a hand drawn animated style.

Gameplay has also changed dramatically, as you’d expect, since you’ll be controlling Pigsy for the first time. The stubby porker isn’t quite as spry as Enslaved’s Monkey, so don’t expect him to be swinging and galloping all over the badlands. Sure, Pigsy’s teensy midget legs can get him around well enough, as he can leap over small gaps or squat down onto all fours to crawl beneath small spaces. But it’s his hook shot, which made an appearance in Enslaved’s main story line, that really gives him the edge.

Those expecting a Bionic Commando-style mechanic here might be disappointed to learn that the hook shot’s use is context sensitive; you won’t be unleashing it and swinging from everything you see. It’s fitting given Enslaved’s fondness for handholding players through platforming, but that doesn’t mean it’s any less enjoyable to use. It’s simple to activate, and involves finding areas of the environment indicated by a green hoot shot marker, and then pressing a button. The game takes over, with Pigsy zipping up or rappelling down, depending on the situation. 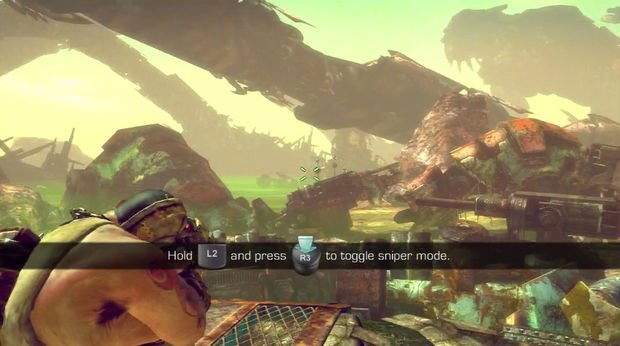 So it’s a given that close quarters combat isn’t Pigsy’s forte, so you’ll want to avoid confrontation as much as possible. With that in mind, “Pigsy’s Perfect 10” puts a bigger emphasis on more thoughtful, slower approaches to situations. In a few areas early on, there were a few stealth elements, where I had to make Pigsy creep on all fours between cover points as mechs patrolled the areas. If I got caught, I was pretty much toast; mechs would descend upon my area and Pigsy would flatline in a matter of seconds.

The cunning Pigsy does have a few additional tools in his chest to help him along the way, though. The Pigsy Prod, for example, is a taser-like melee weapon that can stun enemies for a short time. Once immobilized, you take a quick headshot to secure your safety. He also has a distract device, which acts similarly to Trip’s distraction gadget, and an EMP bomb that can shock enemies motionless for a short period of time. All of these gadgets have a cool down time, so spamming them is out of the question. Instead, you’ll have to use them sensibly and only when needed to clear areas unscathed. 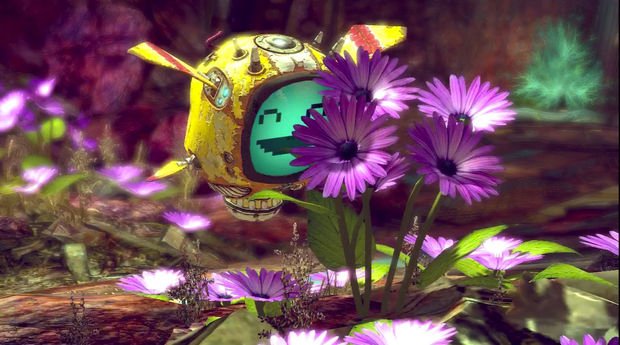 Both the EMP and the distraction device are selectable via the controller’s d-pad, and therefore only took up two slots. With two more openings available for other gadgets, it’s likely Pigsy’s arsenal will expand as his adventure unfolds.

Along with the “Pigsy Perfect 10” download will come a patch that will enable you to play both the new content and the original Enslaved content in 3D. It uses TriOviz’s 3D technology, which means that it is compatible with both 3D-enabled televisions and 2D HDTV sets, provided you have TriOviz’s fancy eye gear. Okay, it’s not all that fancy — it’s just green- and pink-tinted glasses. Namco Bandai was nice enough to loan me a pair, and they look like this: 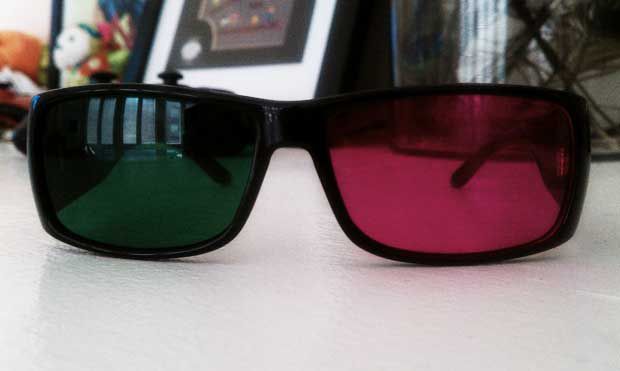 I spent some time playing both the original Enslaved and the upcoming DLC in 3D, and my results were similar to what I experienced with Batman: Arkham Asylum Game of the Year Edition (which also added Trioviz 3D support for 2D televisions). The bottom line is that it’s a neat effect, and the 3D works, but I’m not sure what (if anything) it added to the gameplay experience for me.

There’s also a short period of adjustment your eyes have to do in order to regulate the screen colors. Once you get the glasses on, all you can see are shades of pink and green; after a few minutes, though, your brain adjusts and that’s no longer the issue.

The 3D can be toggled on and off, along with the strength of the effects, in a dedicated 3D options menu before you begin your game. Oddly, there’s was seemingly no way to turn on or adjust the 3D once a game had begun; I had to exit to the main menu to adjust my settings. This actually became an issue, as I was experiencing some blurry picture with the 3D effect pushed to its max. Having to completely stop my game to fine-tune it was a bit irritating. I can also see this becoming an issue for folks whose eyes tire easily while watching 3D, and may want to continue playing but take a break from the effect. 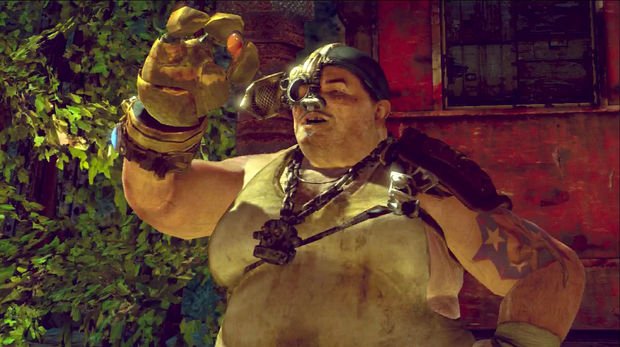 Namco Bandai is promising “several hours” of gameplay in “Pigsy’s Perfect 10,” and from what I can tell, it’s shaping up to be a nice addition and a wholly different experience from the on-disc Enslaved experience. There’s no exact release date yet, but it’ll cost $9.99  for both PlayStation 3 and Xbox 360 when it’s released.