“This game is the reason I joined Ignition three years ago,” said Shane Bettenhausen, the publisher’s director of business development, at a recent demo of El Shaddai: Ascension of the Metatron in New York. “I hate games that are [birthed] in a conference room by a focus group and a bunch of people who try to make what they think people want.”

El Shaddai can be described as the antithesis of that kind of videogame. The London arm of Ignition came up with the outlandish concept for the title: it’s a third-person character action game based on the Book of Enoch, an apocryphal Jewish text found among the Dead Sea Scrolls. As if that weren’t strange enough, Ignition decided to have the game developed in Japan, mostly because, according to Bettenhausen, “they thought that would be interesting.”

“Interesting” isn’t even the half of it. 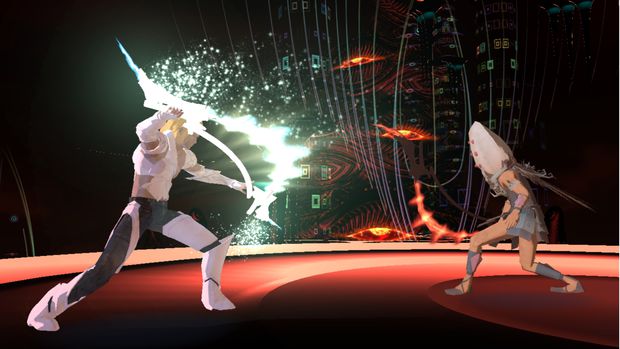 The director of development on El Shaddai, Takeyasu Sawaki, served as a character designer on Devil May Cry and Okami, and Ignition tapped him for El Shaddai because of his experience on both of those games. One of the goals was to design a title that, like Okami, would have immediately arresting non-photorealistic graphics. Bettenhausen said that “Capcom gave [Sawaki] a lot of freedom, but they told him he couldn’t go as far as he wanted” with the abstraction and surrealism in Okami‘s design. Ignition allowed him to unleash his full artistic creativity on El Shaddai, letting him build a team in Tokyo of about 65 people, many of whom had previously worked for companies such as Clover Studio, Konami, and Square Enix.

The result is a striking visual style that draws from a diverse array of inspirations, including ancient Japanese art, African tribal art, and Native American art; each of the game’s twelve acts features a unique art direction that sets it apart from the others. Of course, with a game based on mythology, the artists were free to interpret the text as they pleased — Bettenhausen pointed out that no one can definitively say what the Tower of Babel, for example, would have looked like. (The narrative from the Book of Enoch was left essentially intact, though.)

Key to El Shaddai‘s art direction is its utter lack of HUD elements. Visual cues convey vital information to you, whether they’re letting you know that you’re approaching death (Enoch’s armor breaks away during combat) or that your weapon’s effectiveness has been reduced (its color changes). Like God of War, the game manages the camera for you, providing some jaw-dropping angles of the action. 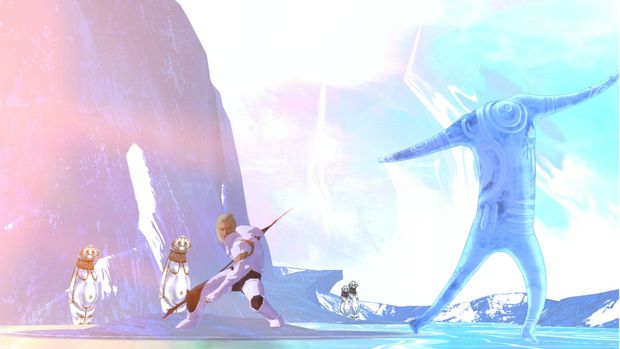 Ignition also wanted El Shaddai to be a more accessible Devil May Cry-like title. “We felt like a lot of [third-person character action] games had become too complicated, [with] too many buttons [and] too much memorization. Whereas fans of the genre were playing them, nobody else was starting to play these games,” Bettenhausen explained. Along with the analog sticks, you will only ever use four buttons in El Shaddai: jump/double-jump (A on Xbox 360/X on PlayStation 3), attack (X/square), block (RB/R1), and disarm/purify (LB/L1). Integrating jumping, blocking, and parrying still allows for a significant variety in combat — the game’s first weapon, the Arch, offers 26 different combos.

“More accessible” doesn’t necessarily mean “easier,” though. On the Normal difficulty, said Bettenhausen, the game is “actually pretty hard. […] By level 5, it was almost Ninja Gaiden, that a regular enemy was killing me.” (Good luck with Hard and Extra Hard, which are unlocked upon completion — only one of the developers has managed to complete the game on the latter difficulty level.)

El Shaddai is designed with strategic elements to its combat setup that keep you on your toes. You can carry only one weapon at a time, and after you have sufficiently weakened an enemy, you can disarm it and take its weapon. But the weapons have different levels of effectiveness against particular enemies, so you have to continuously manage your battles in a way that allows you to defeat your opponents with minimal effort. I watched Bettenhausen take on a group of attackers, and after inadvertently disarming someone, he explained that the weapon he stole was going to make the next phase of the battle more difficult because it wasn’t ideal for the remaining enemies. 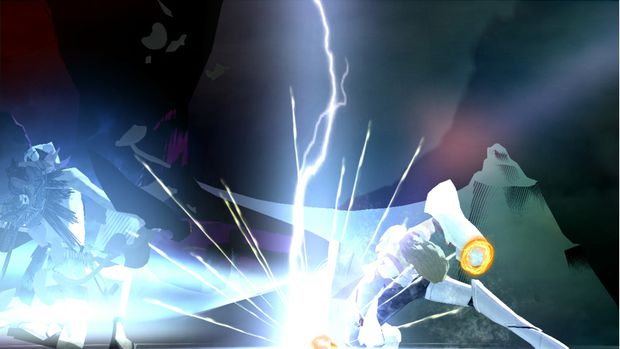 But you’ll have to either disarm enemies or leave yourself momentarily vulnerable if you want to make short work of them. Weapon become “defiled” over time — that is, their strength drops — and in order to restore their vitality, Enoch must periodically “purify” them. The animation takes a few seconds, depending on the weapon equipped, and you’re defenseless during it. However, Enoch will automatically purify a stolen weapon during the disarm animation, so it’s a very useful combat tactic.

Weapons in El Shaddai also affect the way Enoch controls altogether — his running, jumping, dodging, and inertia. One weapon, the Gale, gives Enoch a dash move that serves him very well in the game’s numerous platforming sections. El Shaddai includes jumping puzzles that can get rather complicated, but many of its platforming segments are actually in 2D. According to Bettenhausen, about 40% of the game — including entire acts, at points — consists of 2D side-scrolling sequences (they’re more plentiful toward the end). Some of these segments offer multiple paths to explore; all the game’s secrets must be found in order to achieve the “good” ending.

Bettenhausen loved the first 2D level that Sawaki showed him, but the designer expressed trepidations about its viability. “Will Americans and Europeans like this?” he asked Bettenhausen, who had to assure Sawaki that the idea was worth exploring. “Yes! We also love Mario!” The 2D sections vary the pace, and they have a greater focus on platforming. “We felt like the character-action games that came out over the last ten years were more about brawling [and] less about jumping,” said Bettenhausen, and Ignition wanted to change that with El Shaddai. 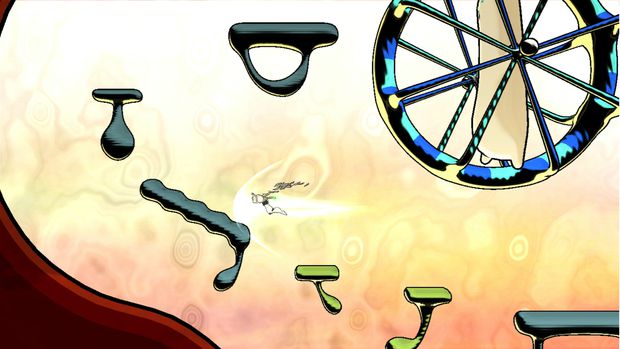 As the story goes, in the beginning, God created the Earth. He sent down seven angels to watch over it, known (appropriately enough) as the Watchers, and he entrusted them with an immense amount of power. This power, as it often does, corrupted the Watchers; they and humanity fell in love with each other, and their offspring were known as the Nephilim. (In the Book of Enoch, they’re grotesque semi-human monsters, but Sawaki rendered them as “Studio Ghibli, slimy, cute Totoro thing[s].”) The Watchers instructed humans to build the Tower of Babel, and each floor was its own utopia. Understandably, this angered God, who decided to unleash an apocalyptic flood on the Earth to wipe everything out for a do-over. As Enoch, you are tasked with finding seven fallen angels in order to prevent that flood of Biblical proportions.

The art isn’t the only surreal facet of El Shaddai — its tale is told in the typically over-the-top anime style. Lucifer (known as “Lucifel” here, since the game takes place before his fall from Heaven) serves as a narrator and guide of sorts; because he has traveled through time and taken a shine to modern fashion, he wears a suit, and he talks to God on his cell phone in order to save your game. Yep. Lucifel’s time travel plays an important role in the story, since, well, he knows what’s going to happen.

It takes Enoch 300 years to find the Tower of Babel, and one of the sections I saw and played took place in the City of the Martys, just outside the Tower. Picture the city of Zion from The Matrix Reloaded meeting Mario Kart’s Rainbow Road track, and give it a Tron-like look, and you’ll have some idea of the art direction of the level. El Shaddai definitely doesn’t hold your hand; much of the level consisted of narrow bridges and platforms that you can fall off of, or be knocked by an enemy off of, to your death. A later section of the same level threw airborne enemies with projectile weapons at Enoch; you could either run past them, fight them, or try to time your jumps so that their attacks broke open item containers sprinkled along the path. 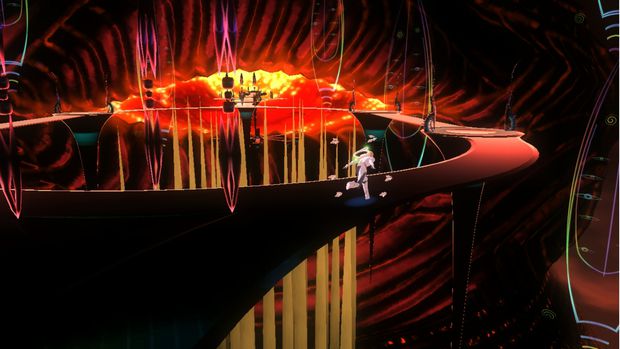 With its stunning and fantastical art direction, classic “simplicity belies depth” controls, challenging combat and platforming, and unconventional take on Judeo-Christian mythology, El Shaddai is shaping up to be a strong title that may fly under most gamers’ radar. “Luckily,” said Bettenhausen, “this game doesn’t have to sell like a God of War in order to be a success.” It likely won’t, but perhaps it should.