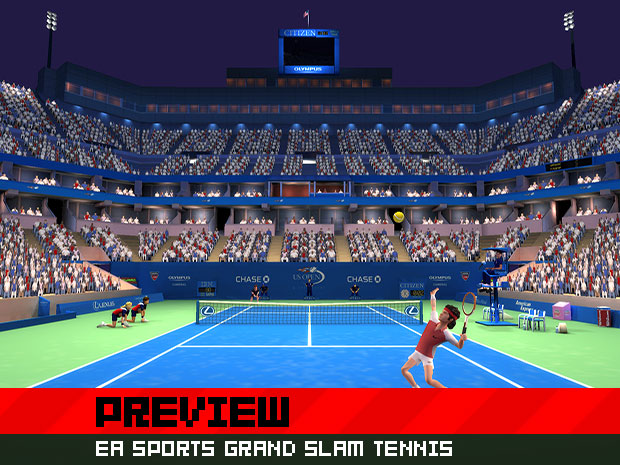 In this console generation, “hardcore” gamers — especially sports gamers — have completely dismissed and ignored the Wii (you know, like many Destructoid readers dismiss and ignore sports games). Their disdain for Nintendo’s wildly successful console may not approach Chad Warden levels, but you might hear this familiar refrain: “real gamers play on 360/PS3.” The higher-horsepower systems have always produced the best experiences, and that’s where most people play.

How ironic, then, that EA’s first-ever foray into the tennis sphere, EA Sports Grand Slam Tennis, may provide the most realistic, accurate simulation of the sport ever seen — and it’s on the Wii. I got my grubby paws on the game at EA’s Season Opener event yesterday afternoon, and I’m here to tell you all about it. Follow me to the jump, kiddies!

[Update: EA has contacted us to let us know that there is, indeed, a option to control your player’s movement with the Nunchuk; that feature has just not been shown off yet. The preview has been updated to reflect this. –Samit]

Since Grand Slam Tennis happens to be a Wii game that takes some time to get the hang of, it includes a helpful tutorial mode. There, you’ll learn how to manipulate your swing and master your timing. Without the Wii MotionPlus add-on, the game takes care of your backhand, and you use the D-pad to control shot types. But ball placement is up to you. For example, if you’re a righty and you want to hit the ball across your body to your left, swing slightly before the ball gets to you. To hit it straight, swing when it reaches you, and to hit it to your right, swing a bit late. This gives you all the tools you need to be a tennis pro — but adding MotionPlus forces you to up your game.

Wii MotionPlus allows for a true 1:1 correlation between your motions with the Wiimote and what you see in the game (which is, of course, what we all thought we were getting with the Wii in the first place). When I say “1:1,” I mean it: if you hold the Wiimote out to your right, and then bring it across your body to your left, that’s what your in-game player will do. Rotate the Wiimote in your hand, and the player will rotate his/her racket. It’s absolutely unlike anything I’ve ever seen in a videogame from an immersion perspective — aside from wearing tennis shoes and standing on an actual court, you might as well be holding a real racket in your hands, because that’s how the Wii Remote functions with MotionPlus attached.

MotionPlus ups the ante on the realism front and on the difficulty front; when that little dongle is plugged into your Wiimote, you have to be acutely aware of how you’re holding the controller — even a slight twist will completely change a shot. With MotionPlus, the shot type depends on the angle at which the racket strikes the ball (i.e., the rotation of the Wiimote), and the stroke itself (your arm motion). Ball placement is dependent upon where you finish your swing. Looking to bury the ball in the back left corner? Bring the controller across your body from right to left. To hit it off to the right, stop your swing on your right side. For a slice, bring your arm down with a high-to-low motion; to give the ball some topspin, go from low to high. In essence, treat the Wii Remote like a tennis racket. [For more information, see the video below.]

When the game was demoed to me, I was only able to play it with the Wii Remote alone. There is a more advanced control scheme that allows you to control player movement with the Nunchuk. For newbies, though, the game moves you toward the ball automatically (though of course, with MotionPlus, you have control over whether you hit a forehand or a backhand). Still, the way producer Thomas Singleton talked about MotionPlus was this: “It’s a different experience — one’s not superior to the other.” He told me that he doesn’t have a particular preference toward either control scheme. As he explained it, sometimes, he’s just not up for paying attention to how he’s holding the Wii Remote. Even without MotionPlus, you can still get an authentic experience.

Grand Slam Tennis offers online play, but that wasn’t being shown at the event. Instead, I took on GameDaily’s Chris Buffa in a few games. He played as Pete Sampras; I chose cover athlete John McEnroe. The two-player competitive play is split-screen, which I really liked; the camera zooms out far enough to keep all the action on each player’s half of the screen. Like all Wii games, there’s a slight delay between your movements and the on-screen game, so both he and I whiffed a few times on shots (we either swung too early or too late). But I really enjoyed myself; tennis is a sport that plays very well to the Wii’s unique strengths. As for graphics, the game doesn’t aim for realism in the visual department; instead, it succeeds with a neat, stylized look, and I saw no frame rate drops.

From a gameplay standpoint, EA Sports Grand Slam Tennis genuinely appears to be the most true-to-life simulation of tennis yet, and it’s specifically because of the Wii’s control mechanism.

I’m very curious to see how the full-fledged advanced controls (Wii Remote + MotionPlus + Nunchuk) will work, but to EA Canada’s credit, they’ve nailed what’s present. Keep an eye on this one, Wii owners.