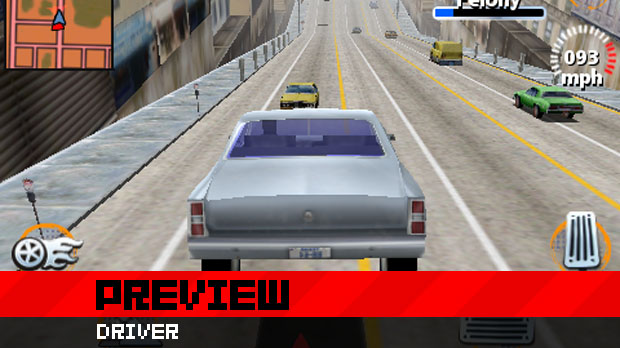 Remember Driver? Sure you do. It was a PlayStation game (and later a PC release), and a pretty good one at that. I had totally forgotten about this classic until Gameloft dusted it off for re-release on the iPhone.

So yes, it’s a port, but its actually an improvement on the original game. We’re talking better graphics and interfaces put on top of the same fun gameplay and physics of the original. An improvement port on a mobile phone? Nice.

Read on for our preview of Driver.

For those that don’t remember, Driver (You Are the Wheelman) was an open-world …uh, driving game, where you’d be the undercover getaway guy in a number of crime missions that take place in different cities. It was set in the 1970s, and took place in locales like Miami, New York, Los Angeles and San Francisco. Now this sandboxy goodness is on your phone, coming with a few upgrades from the original title.

First off, believe it or not, the iPhone game looks better than the PlayStation title. Gameloft upgraded the graphics with new models and texture art. Cars now shine with lighting effects, and environments have been cleaned up and polished. Everything moves at a solid clip, and looks smooth. The menus and interface have also changed to better fit the iPhone’s screen. The end result of all of this work is a game that looks fresh and new, and not like something that came out of the 1990s.

A new addition is the music, which comes by way of an in-car radio. You can change stations on the fly, listening to oldies, rock, and even disco funk music, complete with jingles and announcers and such. The songs are a good fit, throwing you more into the intended world of movies like Shaft and Starsky and Hutch.

While the game maintains the original’s physics and missions and such, there have been a few touchups to the formula. First off, there are now two modes of game play: easy and original. Easy mode lets up on the difficulty for less seasoned players, making the car damage less important and cops less aggressive. Original keeps things at the former high level of difficulty. The in-game city map has also been updated, and now has a GPS system that you reference. Like many iPhone games, Driver has several control methods. There’s both virtual joystick and d-pad options, as well as accelerometer-controlled steering.

At its core, this is mostly Driver in its original form. All of the original’s modes are here, including the optional test-like driving games. That’s a great thing, as there’s not too much like this on the iPhone. All of the changes were for the good. It’s nice to see Gameloft giving an older title some love, too.

Gameloft is prepping Driver for a December release.