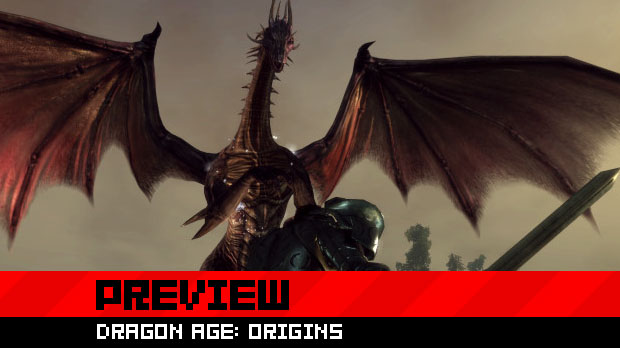 Dragon Age: Origins has been an uncharacteristically low-profile game from BioWare. The studio has certainly put its marketing weight behind the game, but it’s failed to capture the imagination of gamers in the same way Mass Effect did. After having spent two days with the full product in Edmonton, I must say that the lack of attention the game is getting is something of a travesty.

BioWare’s new IP might look like a Lord of the Rings clone to the untrained eye, but the game itself is original, inventive and bloody good fun. The mix of high fantasy and dark fantasy evokes more of a Black Company vibe than LotR, despite the plentiful presence of elves and dwarves.

If you’re a fan of BioWare and RPGs in general, you ought to be keeping an eye on this one. Read on for the full preview, as I tell you exactly why. 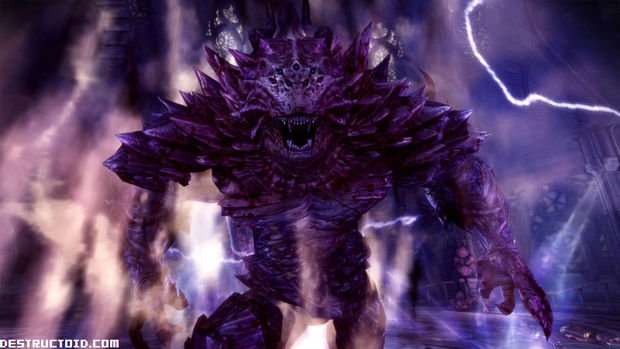 Dragon Age: Origins takes its subtitle from the six origin stories that players start the game with. Players get to choose between the Human Noble, the Human/Elf Mage, the City Elf, the Dalish Elf, the Dwarf Commoner and the Dwarf Nobleman. Although each character eventually becomes a Grey Warden and follows the same general storyline, there are six opening scenarios that provide a unique origin and details how your chosen warrior comes to join up with the only force able to fight back the evil Darkspawn.

As with any Western RPG, personalization is important. The character creation mode greets new players, and thankfully the options are deep without being overwhelming. Too many RPGs these days have such deep and complex character creation tools that it becomes impossible to create a character one’s happy with. The slightly more restricted character creator in Dragon Age manages to keep things quicker and easier, and characters generally come out looking good.

As well as choosing a character, players can also choose a class. Some classes are restricted to certain characters, and as the game progresses, these classes can be further specialized. For instance, a Mage might eventually work his way toward becoming a feared and deadly Blood Mage. The three base classes are Rogue, Warrior and Mage, and each one works as you’d expect, with Rogues able to act as stealthy thieves, Warriors packing a selection of hard-hitting physical attacks and Mages … well, you know what they do.

Interestingly, the Mage class in Dragon Age is surprisingly effective. Mages are usually nerfed pretty badly in RPGs, but my experience with all three classes indicates that the magic-wielders make for the best characters, able to keep their distance and learn Heal spells that won’t tax the seemingly rare health potions that other classes rely on. Mages can provide support to their allies as well as directly attack enemies with powerful spells, making them incredibly versatile. The Warrior, usually the strongest class in any RPG, is made to look frail by comparison.

That said, the other classes are worth checking out. The City Elf, for example, has a wonderful Origin story where he must save his bride-to-be from getting raped by an Arl’s corrupt and lecherous son. I’m also fairly certain that both the Rogue and the Warrior will access far more effective skills later on that make them an adequate match for the Mage, but my time was not long enough to confirm that, unfortunately. 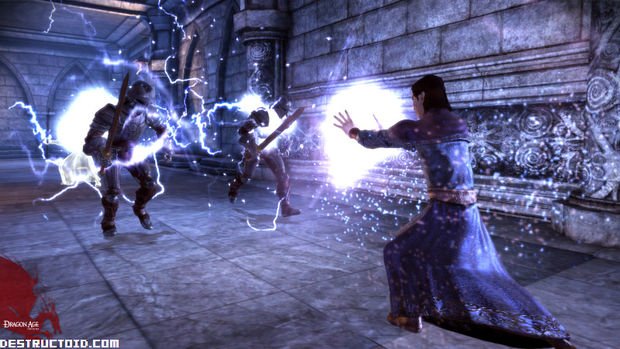 I’ve tried all classes, but I started out with an Elven Mage. Mages start their story locked away in the Circle of Magi, a place where all magic-wielders must be kept for the safety of the kingdom, due to their vast power and tendency to get possessed by demons. Prospective Mages must endure “The Harrowing,” a test of skill that seems them entering a realm of magic called The Fade and fighting off a demon. Mages that won’t or can’t face The Harrowing have two other options: They can be killed, or they can become “Tranquil.” Tranquils have been sapped of all magic power and emotion, basically turning them into Vulcans.

After successfully completing my own Harrowing, a fellow Mage and friend confesses that he’s been having a secret love affair with a Priestess. The only problem is that he’s learned he is to be made Tranquil, which would remove all his feelings and end the relationship. Instead, he plans to escape and wants my help. Since the game is all about choices, I had the option to betray him, and since he was an annoying git, I took that choice and went blabbing to my superior. I was instructed to play along and help the Mage escape with his girlfriend, all as part of a ploy to entrap him. The fact that the game lets you reach such levels of duplicity immediately impressed me, and I spent this whole section giggling over just how badly I was going to screw these poor idiots over.

These kinds of choices present themselves throughout the game and each big choice will have an effect on how the game plays out. In addition, your choice of race and class will also affect how character will address you. Playing a lowly City Elf, for example, will not see you greeted as warmly as if you were a Human Noble. It’s this mixture of subtle alteration and vast consequence that makes Dragon Age interesting and worth playing through more than once. I played through the opening several times, as a variety of characters, and had a unique experience each session. 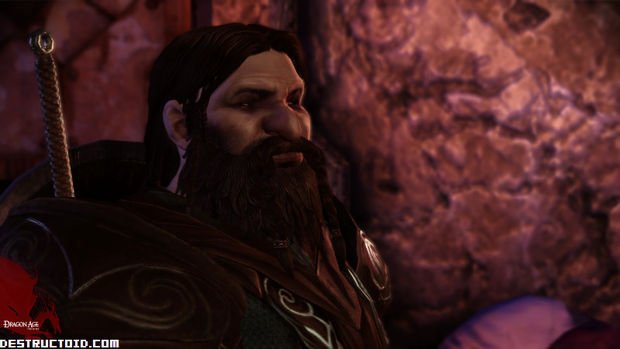 As far as combat goes, players who are familiar with Knights of the Old Republic will feel at home. After targeting an enemy, opponents will automatically attack each other with their equipped weapons. Meanwhile, you can manually select special attacks and magic spells, which need a recharge time between each use. Pretty simple, standard stuff, but it’s solidly produced and is the kind of nerdy dungeon-crawling combat that nerdy dungeon-crawlers will love. Players also have the freedom to switch between characters at any time, accessing their own unique abilities and gaining more control of the battlefield.

In addition to this, one can also pause the game at any time and navigate the environment while the action is frozen. Players can then issue orders to each ally, and the allies will perform their actions once the game is unpaused. This adds an extra tactical edge to the battles, but it’s completely optional and is just a very neat way of giving players more control.

Unfortunately, allies really aren’t all that reliable, and do enjoy getting themselves killed. Even with the ability to customize their behavior patterns with a surprisingly deep AI menu, it can often be difficult to get a handle on who’s doing what and making sure everybody stays alive. It doesn’t help that healing items, at least in the early stages, aren’t in supply enough to meet demand, making the beginning chapters rough for non-Mage classes. 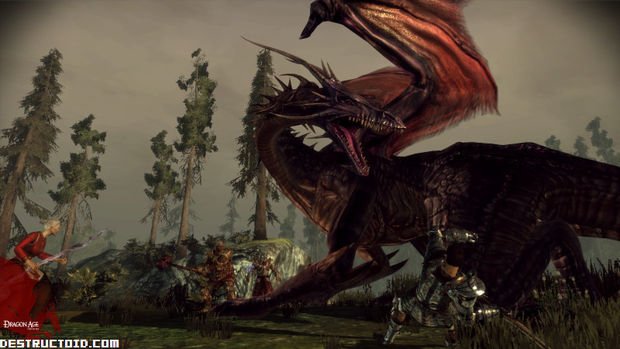 I played the game both on the PC and Xbox 360, and any PC RPG player will know what to expect. The Xbox 360 version is, of course, the wildcard and more interesting subject. Those planning on playing the console version will be pleased to know that the controls have been very nicely streamlined for those not fluent in mice and keyboards. The face buttons act as command hotkeys, with a press of the right trigger changing the buttons function and allowing for more commands. In total, you can hotkey six commands, with the other skills being selected from a wheel that you bring up with the press of a bumper. While obviously not quite as sprawling as the PC version, the console controls are nevertheless convenient and sensible. Certainly far more well designed than say, Oblivion was.

My time with Dragon Age was not long enough, and what I mean is that I desperately want to still be playing it. Its dark storyline and fun RPG combat make for a solid backbone, but it’s the level of choice and personalization that players can bring to the game that truly allows Origins to stand out. I’ve never been a huge fan of BioWare’s previous games, but this one has impressed me, and I cannot wait to play the full game. If you love RPGs, you’d be a fool not to try Dragon Age out. It’s going to be among the best roleplaying experiences of the year.