Up until last week, I wasn’t all that interested in Epic Mickey. The game looked alright, but I’ve never played any of Warren Spector’s games, and even more sacrilegious, I wasn’t the biggest fan of Disney.

My recent trip to Disneyland has changed me on both of those fronts. Epic Mickey has reminded me what Disney used to represent, and how incredible the studio was before it turned into what it is today. There was a time when “Disney” meant more in our culture than “High School Musical” and “pays for Pixar to make awesome movies”. While Walt was still alive, Disney was run by an actual, honest-to-God artist, and it showed in the way the company prioritized things.

Epic Mickey is all about recapturing those priorities, and bringing them back to the forefront. Read on for my full impressions of the game, and the art that inspired it. 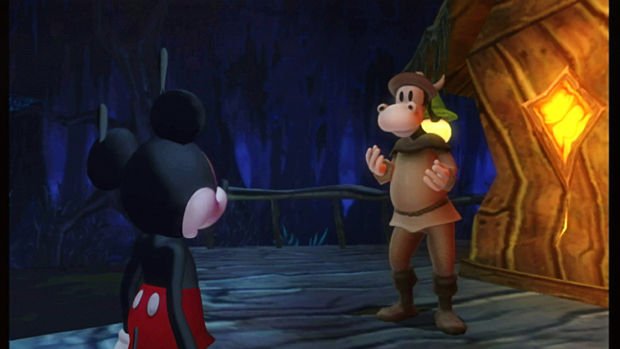 Before playing the game, we in the gaming press were treated to some 50-year-old-plus Disney shorts, the kind that used used to proceed feature length movies in the theaters. The older these cartoons got, the less they had any sort of discernible story, and the more they focused solely on showing us how beautiful a simple animation can be.

These are cartoons that were created in a time when making a drawing move around on a screen was in itself a magical thing, more exciting than anything going on with technology today. Under that perception, animators felt obliged to pack their films with as much magic as possible, and to them, magic came in the form of “cartoon logic”; arms suddenly stretching to enormous lengths, birds transplanting their wings from their bodies to their heads, that sort of thing. More than any one particular character, imagination was really the star of classic Disney cartoons. 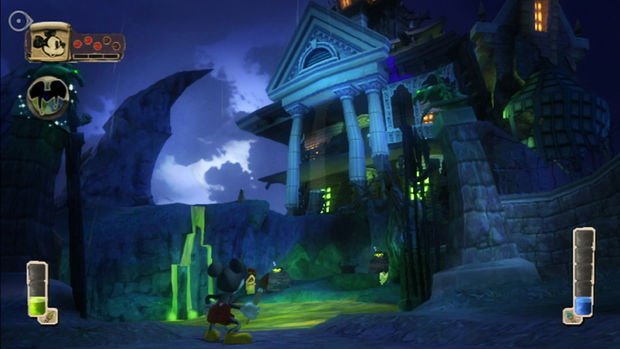 That’s not the only thing that set these cartoons apart from the stuff Disney turns out these days. a lot of these films also had a weird, almost seedy undercurrent to them. It wasn’t uncommon to see Mickey try to force some kisses on Minnie (while she giggled and ran away), or for Minnie to be out on the town with two young mouse-children, with no father in sight.

That semi-sexual weirdness was even more evident in the cartoons starring Oswald the Lucky Rabbit; Walt Disney’s first animation super star. Before he created Mickey, Disney worked for Universal, where he created Oswald; a hornier, crazier rodent protagonist than his younger brother Mickey. Oswald had several different girlfriends, some of them from different species. Pretty weird stuff by “kid friendly” cartoon standards. 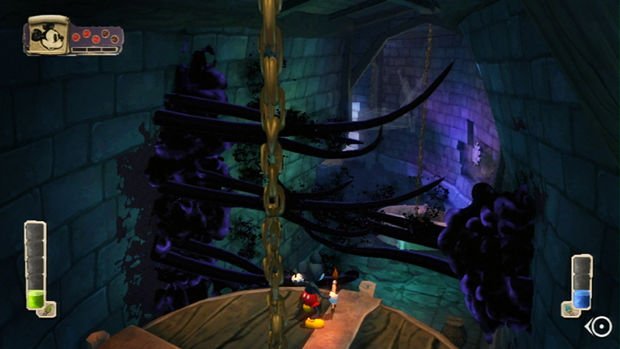 It was clear from my time with Epic Mickey that Warren Spector is aiming to make a game which captures that glorification of animation for animation’s sake, and the rejection of normalcy that comes with it. This is a strange game; much more surreal than I’m used to seeing from a Western developer, let a lone one as clean cut as Disney.

For example, a few hours into the game, you’ll be attacked by groups of cute little blue bunnies. As it turns out, these bunnies are all Oswald’s children; all 420 of them, presumably birthed out of wedlock by Oswald’s cat-girlfriend. These little creatures can’t be easily stopped. The only way I could subdue them was by turning on a nearby television — which, conveniently enough — was playing Mickey Mouse’s Steamboat Willy on a constant loop. The sight of a functioning television drew the bunny/cat bi-species brethren right off my back. Once they had a show to watch, they ignored me completely, totally transfixed by moving drawings on the television screen. 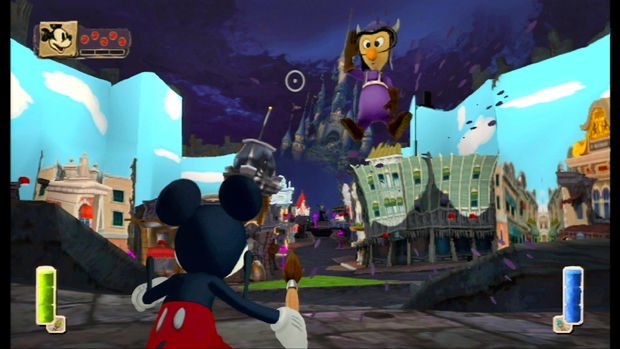 Other than the bunnies, there seems to be two types of enemies in Epic Mickey: those made of ink, and those made of animatronics. There’s meaning to that, as to Warren Spector, Disney is defined by both the company’s mastery of hand-drawn animation, and their pioneering of robotics as a form of entertainment. This is a man who sees both Disney cartoons, and Disney theme parks, as the prelude to what videogames are today.

During the event, he stated several times that any game developer who cares about their work needs to study the Disney theme parks. For Warren Spector, going to Disneyland is like entering a real life videogame. I’m paraphrasing here, but as I recall, Mr. Spector said that all videogames are virtual representations of an imaginary space, and that Disney rides and attractions are the same thing, except they aren’t virtual. From that perspective, the psychology behind the design of a theme park and a videogame are not too different. 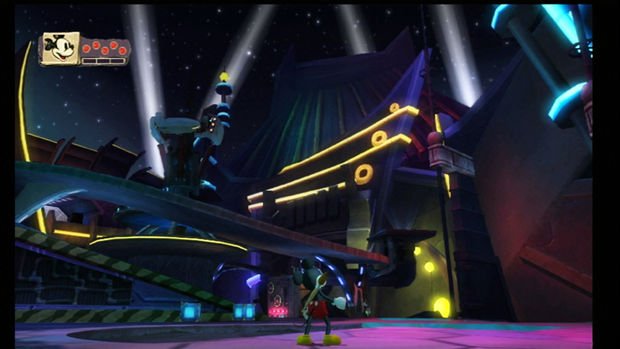 Videogames do have one big advantage over theme parks, though. In a videogame, you can do whatever you want. The rules of physics — and the rules of good behavior — can both be thrown out the window. This is not something that was lost on Warren Spector. Epic Mickey allows you to break the rules of reality at a constant pace. The game’s signature gameplay hook, the ability to create and erase objects in the game’s world, is constantly being put to use. At first I feared that the feature would come off as gimmicky, but thankfully, the way it’s applied saves it from feeling cheap or tacked on.

Like nearly all good game mechanics, the painting/thinner stuff feels very organic and natural. After a brief tutorial level, I was quickly creating and destroying things in the environment as I was platforming around. After some practice, I could even create a platform underfoot in the middle of a jump. Balancing the world-shaping and world-traversing gameplay elements is the key to Epic Mickey’s success, and from the two hours that I’ve played so far, they’ve nailed it.

Junction Point has also done an exceptional job at making good on their promises for non-linear progression. You constantly have the choice between solving a problem with paint or with thinner. Paint an enemy, and they’ll help you fight other enemies, but they might turn on you if some of the paint gets washed off of them. Hit an enemy with thinner, and they’ll fight you more aggressively, but once they’re fully doused, they’ll stay dead for good.

There are similar choices present for each of the game’s platforming puzzles and boss fights. In my battle against animatronic Captain Hook, I had two choices (that I know of). I could fight Hook with thinner, which would eventually cause him to walk the plank and end up in the mouth of a robotic crocodile (complete with tick-tock heart beat). That’s the easy route. It was much more challenging to take the other path. By painting and platforming to the top of Captain Hook’s ship, I was able to set one of Mickey’s allies free, who proceeded to battle Hook on my behalf. The choices I would make here would have long-lasting effects on the rest of the game, including cinemas and the game’s final ending. I was told that the first playthrough of Epic Mickey is averaging at 26 hours, and that you’ll need to replay the game with different choices at least 2-3 times to see everything. 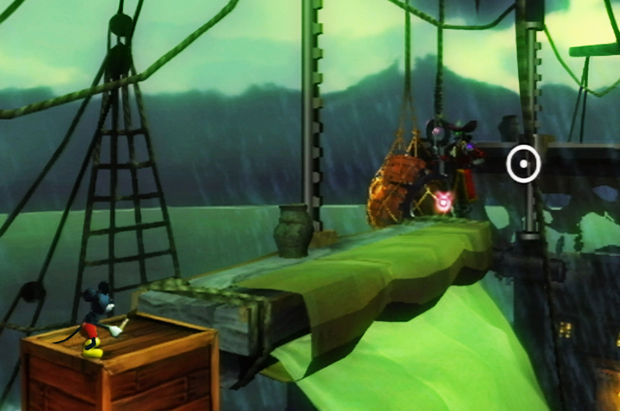 The developers were especially excited to see how players may “break” Epic Mickey. Towards the beginning of the game, you’re forced to either save an NPC and lose some treasure, or sacrifce the NPC to get what’s in the chest. At least, that’s what the Team at Junction Point thought. A clever play tester found a way to get both the treasure and save the NPC. Instead of seeing this a a glitch, Warren Spector and his team say this as a feature. Encouraging the player to experiment and find their own solutions is exactly what they want they want to do.

This preview is already ridiculously long, so I’d better wrap it up. Before I go, I want to tell you about the new area they showed us in the game. It’s called Mickeyjunk Mountain, and it solidified my belief that Epic Mickey is a true labor of love. It’s a giant landfill packed with Mickey memorabilia, including giant replications of SNES and NES cartridges of Disney games gone by. Though the game only contains characters from pre-1968 Disney, there are still plenty of acknowledgments to more recent Disney experiences. I’m also loving the Tron stuff. Warren Spector is apparently a big Tron fan, so expect quite a few nods to that series as well. 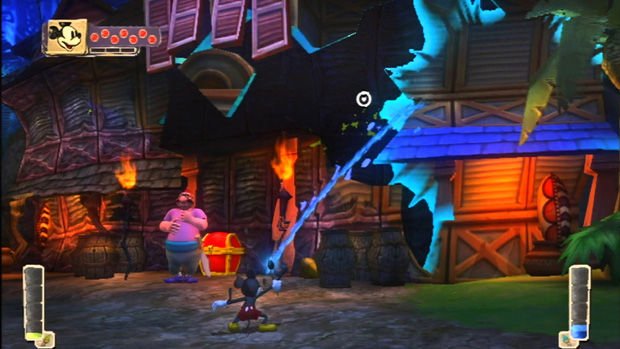 There is so much that I’m leaving out here: the surprisingly evocative storyline (complete with hearts being ripped out of people’s chests), the hundreds of collectibles, the 2D levels, the recreation of famous Disney cartoons and rides, but I really should save something for the review. As for now, I’ll end by saying that Epic Mickey has a lot to offer for people who love the study of game design, classic Disney, or just anyone who worships at the alter of imagination.