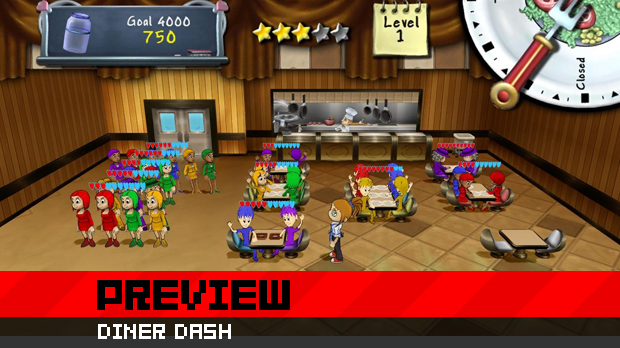 Anyone with a general awareness of casual games has likely heard of or seen Diner Dash, Playfirst’s popular restaurant management title that’s spawned everything from Wedding Dash to Cooking Dash in its wake. Without ever having played these games, I had a feeling I should probably steer clear of them lest they gobble up every moment of my free time, but I finally could evade them no longer when I sat down to preview Hudson‘s take on the popular title.

It wasn’t long before I was looking for excuses to snatch ten minutes here and there to get an expert rating on just one more level or try that really impossible part all over again. I also had the pleasure of playing with Andrew Plempel, the lead producer on the title, and he was able to shed some light on how the game transitioned from its home on PCs to gaming consoles. Hit the jump for more!

Being a gamer who was unfamiliar with Diner Dash up until very recently, I went into the experience expecting a casual and cute game that would offer me a very slight challenge at best. Boy, was I wrong. This version is definitely a little bit different than some of the PC iterations, but it is in no way easy. It is definitely a cute title with a lot of style, but it offers up a lot of challenge. It’s a great game for gamers who have a touch of OCD, and since I do, it didn’t take me long to fall in love with it.

For those of you who have never played it, the concept is very simple. You play as Flo, a stockbroker who realizes she hates her job and needs to leave it in the dust to pursue her true dream, which is to open a restaurant. Of course, getting there is no easy climb, and to help Flo do so, you’ll wait tables while trying to keep all manner of customers happy. Wait until you meet the business women — you’ll be muttering “Get out of my restaurant!” under my breath after a few rounds of trying to keep them happy. Amuse yourselves on your Blackberry or something, will you, ladies?

As you can see from the screenshot above, each party has a row of hearts above their heads, which will shrink as you piss them off. You can do this by taking too long to seat them, ignoring them when they are ready to order, or in the case of some of them, not serving what they order at the speed of light. All customers are different though — for instance, older parties are much more patient than the dreaded businesswomen, and you can let them wait a few more seconds before they get angry at you. Learning how to balance these precious seconds can make the difference between passing a level and failing miserably.

One key tactic you have to learn to use is chaining. For instance, when you seat 4 groups and wait for all of them to be ready to order at the same time, if you take their 4 orders all in a row, your point bonus increases with each one you take. It sounds easy, but add in that you have a line of huffing customers behind you and people rattling their silverware at the other tables, and pulling off these combos becomes more difficult than it might initially seem. You’ll need them to achieve the scores needed to pass the later levels though, so don’t dismiss them!

You may be wondering why each customer is a different color. Well, that factors in too. Some levels will have colorless tables when you begin, but as soon as you sit a group, the chairs turn to the color of the person sitting in them. Manage to sit the same color in it next time around, and you’ll create another type of chain, marked by a little number on the seat. These can also be key in amassing enough points to reach your goal, but will present a challenge as you’ll need to move quickly to make sure you put the right colors where they belong!

As the game progresses, the restaurant grows in popularity and the amount of people that show up to eat there will quickly increase. You won’t have enough tables to seat everyone, so you’ll start to have to make use of special items such as drinks to chill people out and the podium you see in the shot above. To use it, you run over and stand by it for a few minutes until the heart on the front of it fills up. This will refresh the people standing in line and give them a few hearts back. It just buys you a bit of time, but it’s time you’ll really need, especially by the time you get to the end of the second restaurant’s level.

That’s just the single player that I’ve been referring to so far, but the multiplayer adds all kinds of extra challenges as well and gives the game a major boost in replayability. Endless Shift mode allows you to play online with up to 8 people, basically pushing you to go for the highest score that you can. Team Dash and Head to Head mode are also available, so you can either partner up with a friend and work together or fight each other to the death in a fierce race of dish slinging.

You can also tweak the type of multiplayer you want by choosing Tip Wars or Time Wars. The first choice will allow you to set an amount and see which of you can reach it first, while the second will simply see who can rack up the most points in the limited time you choose. I noted that you have to use different strategies for single player versus co-op or Head to Head mode — for instance, I focus on large combos in single player mode, but in a Head to Head match, the other people you play with will be snatching up customers and busing tables as fast as they can, so you’ll have to do the same. Chaining kind of goes out the window here!

Simply put, Diner Dash is a blast to play and one of those games that you can dedicate ten or fifteen minutes to at anytime and easily save and come back to later. It’d also be an ideal title to try out with a big group of friends online, and I can certainly imagine yelling at my friends over the headset as they snatched a group I had a perfect table ready for. I have a feeling it will chew up quite a bit more of my free time when it gets released later this year!

Diner Dash comes out this summer for Xbox 360, PSN and WiiWare.