This is the part where I’m supposed to speak, generally, about other Deus Ex games and say things like, “Deus Ex is the greatest game of all time and you’re stupid if you didn’t like it.” Then, I would smoothly transition to the subject of Deus Ex: Human Revolution and mention that Eidos Montreal is attempting to re-establish the series as an all-time great after the creation of the laughable Invisible War.

Maybe I’d also tease you with a line suggesting that Human Revolution appears to be well on the road to picking up the pieces of the series that Invisible War left behind.

For now, I’d like to just say that my sessions with its short, one-mission preview build were phenomenal. It was entertaining, the shooting was surprisingly sharp, the choice presented to me was cool, and the stealth was forgiving and satisfying. I’d say that this is well on the road … oh-ho, caught myself. 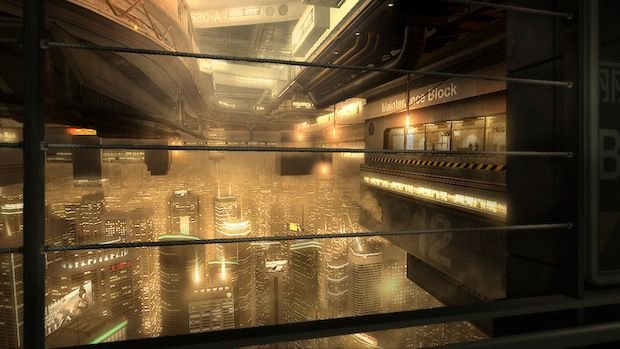 In the opening hours of Deus Ex: Human Revolution, a political war is morphing into an open, organized, and violent one. Cutting edge human augmentation that melds man and machine is on the verge of becoming attainable to all. For the Purist movement, this is a revolution that demands blood in order to stop. Science, then, must coddle its invention and defend it against these puritanical aggressors.

We see shades of the intellectual part of this fight in our actual world. Science can now fix man with screws, plates, and cadaver meat. Someday, it will be able to address woes on a genetic level, and perhaps, even enhance the human experience. For some there’s a real fear that these next level discoveries are stumbling into creation territory, and we see and hear the discussion between figureheads, politicians, and others all around us.

It’s much more complicated than that, but suffice it to say that there are multiple levels of discourse and several ‘groups’ out there vying to be heard. For better or worse, Human Revolution cuts to the marrow by featuring just two teams, one of which is bad and the other a bit better: the Purists and science — specifically Sarif Industries in the opening.

I didn’t get a great sense of this in my hours spent with Human Revolution, but it appears as if it wants to say something through the medium. Whether any kind of commentary will happen remains to be seen, but I like the setup and the ideas swirling around.

You play as Adam Jensen, a futuristic sell sword living in the game’s world of 2027. In the initial hours, you get a sense that Jensen is an asshole with a checkered past. He was a SWAT officer once. Now, he’s gruff contractor working for Sarif Industries as the world implodes around it. Sarif is the creator and apparent driver of this augmentation junk. 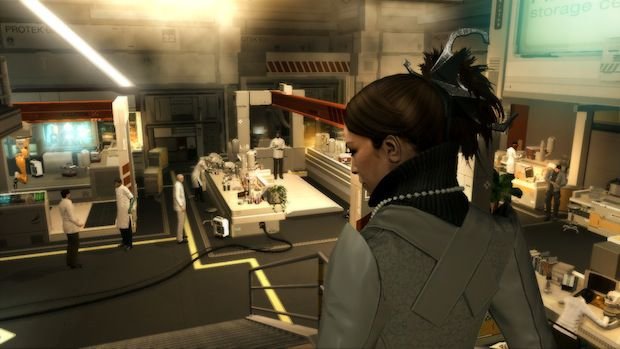 Just beyond the introductory cinematic revealing that some sort of conspiracy is afoot surrounding the announcement of this science, you tour Sarif as it tests. Soon after, you’re in the shit as a group of bad dudes augmented to high hell invade the plant and put the boot to the white coats and set fire to the labs.

It’s of note that during this section Jensen is completely human. He doesn’t have cyber shades or the other augmentations you’ve seen in teaser footage. The HUD and feedback systems are limited, so you’re given an up-front taste of the combat as a naked dude.

Human Revolution reminds me of a modern Rainbow Six joint. It’s presented in a first-person perspective, but most of the action is spent in third-person behind cover. It’s made clear from the get-go that it’s unwise to go gun blazing; bullets in Human Revolution hurt as much as they do in a simulation shooter, so after a couple of shots you’ll go down. The same can be said for the enemies you’ll face.

The AI is smart in addition to brittle. Like in the FEAR series, enemies map out their immediate surroundings and take advantage of flanking positions. Sliding between pieces of cover, then, is a necessity as much as a clear head and good aim are. 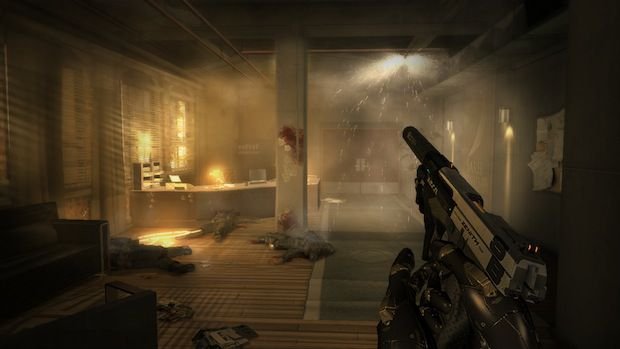 Later in the lab scene, Jensen is murdered — or at least, maimed to the extent that he needs to be reassembled and refitted. Sariff takes it upon itself to augment Jenson with its tech, stripping out some of the remains of his flesh and adding machine parts.

For you, this means you now have access to a generous HUD that holds vital information, a generous mapping system, and other useful information-gathering elements. Jenson’s body can now be fitted with upgrades, too, when he earns enough experience points from killing and hacking to do so.

In these first few hours, I was hopeful that I could get a sense of what Jenson thought of his new machine-laden body, but I didn’t catch any discussion of it. I also wanted to be able to give upgrade system a spin, but I never earned enough points.

There are, however, a bevy of upgrade paths and options, the majority of which seem to serve the two key action components of the game: stealth and assault. I’ll also note that you can upgrade whatever, as Human Revolution doesn’t lock you into a “class.”

But, it’s obvious that assault people will want the armor and strength upgrades, while the stealth-minded folks will want to focus on hacking and enhancements on the legs which can, say, remove the sounds of footsteps and such. 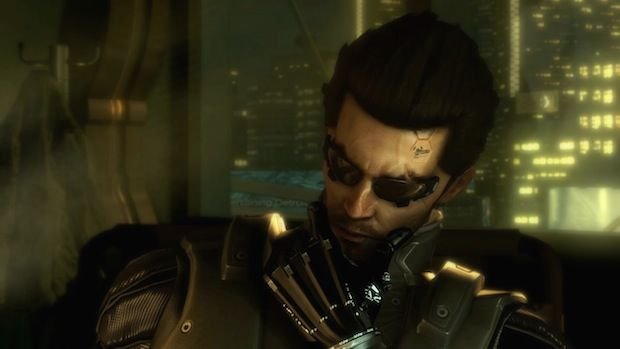 Each upgrade seems to add a power to the mix of action. Armor fixes, for example, can add catastrophic area of effect attacks. A hack upgrade can add to the utility of virus injections. Since I didn’t get to see how meaningful these actions are, though, I’ll hold my tongue for the moment.

Six months after his operation, you again take control of Jenson who is still under the employ of Sariff Industries. Your first mission is to… investigate some bad stuff going down at a plant owned by the company. A group of Purists have invaded and taken prisoners.

In the plant, you get a good sense of the alternate ways you can approach combat. You can, if you desire, go head-on with the foes patrolling the hallways. If you go this route, you’ll encounter a lot of enemy conga lines. A dead dude triggers a response from others and people tend to pile up around the first kill if the environment is tight. There are a few set piece firefights, though, that keep the action fresh.

There’s also a surprising amount of stealth options that can be made, as the plant is riddled with ducts and multiple pathways to be explored. Oddly enough, I came away thinking that this specific mission was more fun to do in stealth. The mapping system is generous, so you’re always plugged into updated enemy movements, which kills the big bugbear I have with stealth in general, the accidental discovery when I round corners. 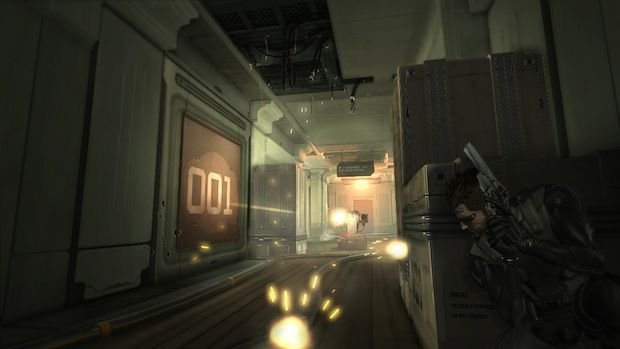 It’s hard for me to reign in the anticipation that I have for Human Revolution after this demo. I think the shooting mechanics, which rival a lot of simulation FPS games, is perhaps the key reason. If you play smart, you’ll live. If you blow a hole in dude’s face, he dies. That’s simple stuff, but satisfying.

I also think the dialogue system and the story have a lot of potential. When you talk to people, a Mass Effect scroll wheel pops up, allowing you to be, for example, a space jerk, sentimental, or intelligent about a topic. This wheel also crops up in situations that can alter how a plot point shakes out. In the plant, for example, I was given the opportunity to kill a Purist, save the hostage he was holding, or attempt to save her. I chose the former, but regardless of what you choose, that’s a meaningful choice that could, I hope, have some bearing on who Jenson is and how the narrative shakes out down the line.

I get the feel, regardless, that Jenson isn’t a ‘good guy,’ but rather a dude who sits in grey area about what’s going on around him despite his augmentations. If this is an accurate takeaway, then Jenson has the chance to be a compelling character. A lot of the people I encountered seemed to have dual-interests and differing intentions, so I think that’s a valid bit of speculation on my end.

Feel free to revoke my nerd card, but I never finished the original Deus Ex or its, by all accounts, terrible follow-up. But I’d like to add, based on these limited experiences, that Eidos seems to be doing this franchise right by demonstrating a reverence to the source material while iterating on a lot of the outdated design. Deus Ex is only, like, one of the greatest games of all time, so no pressure or anything, guys.

But, seriously, if the full game is as sharp as this two-to-three hour slice was, I don’t think we’ll be lamenting the fact that this was yet another failed game in the series. There, I said it.