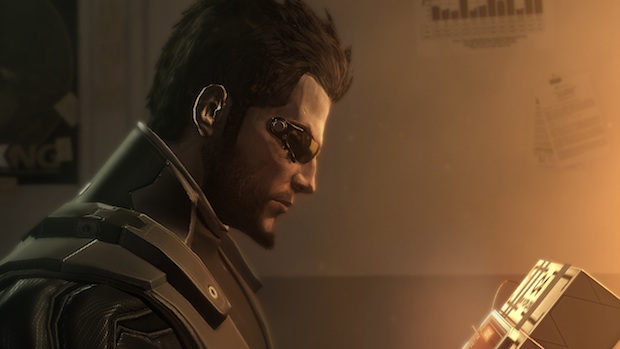 Last week I was invited to Eidos’ Montreal HQ to get a better look at Deus Ex: Human Revolution. If you haven’t seen much of it yet, know that this game is easy to appreciate. I remember the first time I saw it: I was at a pre-E3 judges event early this year, where Square Enix and Eidos showed off some of the art. They followed a presentation about the art with a lovely trailer. Everyone at the event was talking about how great it looked that evening. It’s impressive looks stuck with me. One of the key things I gathered from the presentation and trailer is that the developers have spent a lot of time on the details.

Now that I’ve had the chance to get a better look at the game, I see the same trend throughout. It’s all in the details, they say, and Eidos knows that. The details in this game go way beyond visuals, extending into the sound, story and game play. My feeling is that Deus Ex: Human Revolution has to be one of the most thought-out, overly detailed games ever made. The end result is a game that’s very impressive, from every angle. It seems like they haven’t missed a thing.

While I’m just bringing you an overview of the story for Deus Ex: Human Revolution, know that they’ve left no stone unturned. There’s actually a franchise “bible” for Deus Ex, and when writer Mary DeMarle took the reigns, they went and even added more to their own bible.

The year is 2027, only 17 years in our future and 25 years before original Deus Ex takes place. This is not necessarily a prequel but a new story in that universe. It is a time of great innovation; the world is making advances in energy, technology and global warming, and there has been a great burst of scientific discoveries.

One of the biggest changes is the introduction of augmentations. Think of these as mechanical bodily upgrades. There are many different types of augmentations available now. Neural augmentations can make you smarter. Others can help you overcome physical limitations. These upgrades should change life for the better, but they’re also causing problems.

This is also a time of chaos and conspiracy. The rich are still rich, and the poor are still poor. Some are trying to maintain control over society through augmentation control. Augmentation offers chance to improve your life if you can afford it. As they come at a high price, this divides society, creating a new middle class. A new social divide is starting to brew, and with it people trying to control both sides.  Sarif Industries are competting for the lucrative market, pushing people to advance. Humanitarian organizations are on the other side, not wanting the changes to the human body to be allowed.

In the middle of the chaos you find Adam Jensen, a private security specialist. He has a bit of a checkered past that the story will eventually reveal. Right now he has to protect the research and the people that make these augmentations, as Sarif Industries’ protection guy.  The industry’s underhanded tactics make company and its people vulnerable, so Jensen is tasked with protecting researchers on the eve of historical hearings that address the control of these new developments.

During these hese hearings Sarif Industries gets attacked by augmented black op mecernaries. They attack and kill researchers and nearly destroy the company. Jensen almost dies in attack, but is captured and forced to become augmented himself. It is not clear on who did this or why. You work to uncover the truth as Jensen. As you play you become involved in conspiracy; you’re taken deeper into it and eventually discover that someone is manipulating society and this technology behind the scenes. Your actions will force them to adjust their plans. The future of human evolution is at stake and you decide what shape the future will take.

The game’s slogan sets the scene: “It’s not the end of the world… but you can see it form here.” 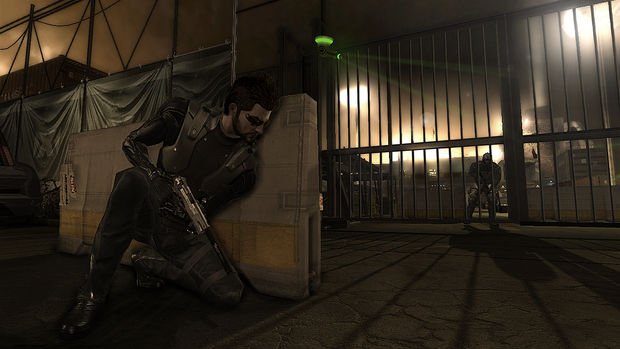 It only takes a quick glance at Deus Ex: Human Revolution to see that they’ve put a lot of work into the visuals. The game is stunning from what I’ve seen so far, and what’s scary that it isn’t even finished yet. I was able to get the full rundown of what Eidos has put into the look of Human Revolution, and I have a bit of it to share here.

Early on the team decided that they’d value illustration over simulation. They say that they’re not trying to be photorealistic. Think Assassin’s Creed over Crysis. The team says that they prefer a more a glorified version of reality. Not that they’re biting off Ubisoft — it’s just that they’re into the same philosophy.

Another key aspect of the look is design distinction. The thinking is that if you have something that looks different,  it has more chance to be recognized. Bioshock and Team Fortress were used as example. Remember how you didn’t know anything about Bioshock at first, but you know you want to be part of it? That was all about the game’s distinctive look.  In a presentation I was shown something that really made their philosophy hit home: A screen was filled with about 25 or so screenshots from games like Killzone 2, Furok, Frontlines: Fuel of War, Huxley, Unreal 3, Gears of War, Dark Sector, and GRAW. Seeing them all blur together, with similar colors and settings, really made Deus Ex: Human Revolution stand out.

What they called the Cyber Renaissance was the driving force for visuals. The theme of transhumanism in the game fell back to Leonardo da Vinci’s famous body workings sketches. In the real Renascence era we started understanding the human body. We started to understand how the human body worked, and that was the first big step into who we are today, through modern medicine. The idea in this game is that transhumanism is next big step: mastering body and blending in technology. This is the new leap to be next part of evolution.

We saw concept art for this cyber renaissance. One featured a limb clinic, which is where you go to beef up character. It featured old wood walls, an operating table, big glass windows, old chairs and so on. It was mixed in with technological advances like big screens and holographic looking displays. We also saw Jensen’s apartent in Detroit. It was a mix of near-future settings with renaissance elements like an old chandelier.  Future Detroit itself mixes old structures and new tech devices, attached in a blend. In concept art we saw Scandinavian architecture, a building inspired by a popular Tokyo store, and more, mixed in with signs and lights and everything futuristic. One of the most intriguing scenes was one of a double decked city inspired by a mockumentary on Hong Kong. There was two layers to this island city — over and under.

For the fashion in the game, they looked at current day fashion designers, some of which were already designing stuff inspired by the Renaissance. The fashion was slightly influenced by the period’s poofy shoulders and ornate collars, though they didn’t exaggerate this influence.

The color scheme of black and gold is important to Human Revolution, even in how the game is messaged. The colors show both sides of the experience: black represents the end of the world, while gold represents Icarus, transhumanism, and the idea of going into the sun, or ascending. It also represents hope in dark times. Another key aspect of the game’s look is fog and smoke. The cyberpunk setting creates tension and atmosphere. Either smoke or fog is found almost everywhere in the game, and it can represent the mystery of who is behind conspiracy.

Even the details are detailed. The design team worked to make sure that the mechanical design is believable. You can see it in all the details and props: washer machines, phones, displays and more. On an unconscious level these things talk to you to a certain degree. They also put a lot of details into weapons, which were not designed after real world weapons, but maybe inspired by them. The team was trying for their mechanical design to make sense. They all looked real, but also like they’d be fun to play with.

Finally, we saw an example of the many brand logos in the game. Overall over 100 brands created for game, all working to give the world the sense of being more crafted and believable. 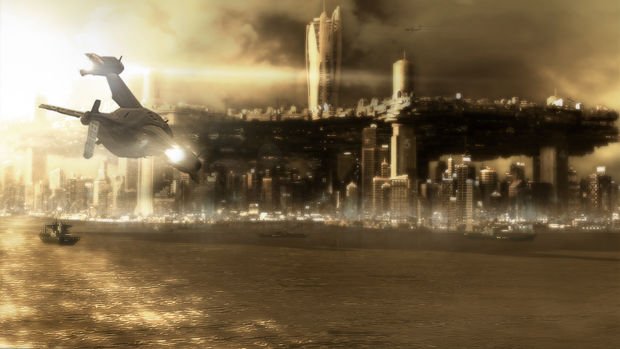 The open-ended approach is stunning in scope. Eidos says that they wanted players to feel creative in the way they solve their challenges. To achieve this, all maps are multi-path and have multiple solutions. There are no linear levels and there are always several options. Multiple paths, multiple solutions and multiple play styles combine with the ability to make important choices to direct the game in one direction or another to make a game that seems so unbelievably vast that it boggles the mind.  We’ll touch on how the gameplay can vary by player in a later preview.