During E3, Hudson announced that it was bringing its Deca Sports franchise — which has sold more than 2.5 million units worldwide on Wii and DS — to Kinect this fall. The controller-free compilation of sports offers the following events:

As you can see, many of the mini-games in Freedom aren’t what you’d typically expect from a sports title. That’s because this game has been designed from the ground up for Kinect — it’s not merely a port of one of the Wii Deca Sports games. I saw the game last week in New York, and came away impressed. (Special thanks to PR man Ron Burgess, who suffered through the indignity of the figure-skating mode for me, when he could’ve picked any of the other, less dainty games.) 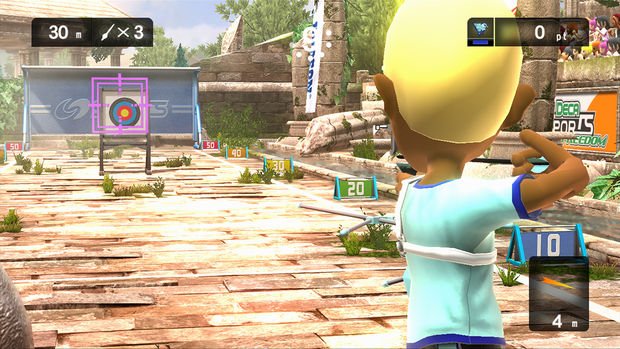 First, Ron demoed tennis for me. Its visuals aren’t going to amaze anyone; they’re serviceable, but they get the job done for this kind of videogame. What is impressive about tennis in Deca Sports Freedom is the fidelity of the experience. In tennis, you stand in front of the Kinect sensor and swing; just like in Wii Sports, the game handles your movement for you. Thanks to Kinect, the game can detect subtleties in your swing that will determine the type of shot you make.

This means that you can spin your wrist downward as you swing to initiate a slice, or swing hard and continue your follow-through for a cross-court winner. If you time your shot perfectly, you’ll get a power boost (seen in the header image to this preview). It’s this kind of functionality that makes me think that technology like Kinect has a promising future ahead. 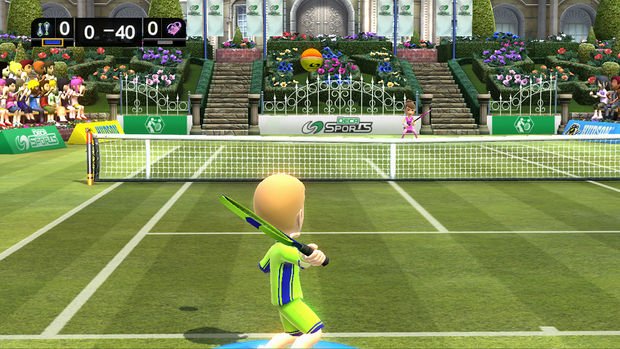 Next, Ron decided to man up and show me the figure-skating game. Again, your on-screen character will skate around the rink by him- or herself. The game marks spots on the ice and tasks you with performing gestures — which correspond to figure-skating moves such as jumps, spins, and jump-spins — in those spots. The better you time your gesture (i.e., the closer you get to the center of the on-ice circle), the higher your score. If you miss, your character falls on his or her ass.

As you can imagine, the combination of seeing Ron struggle to do ballerina-like poses in front of a TV and watching his avatar fall on the ice a few times was nearly too much for me to handle without bursting out in laughter. I think I managed to keep myself (mostly) composed, though. Figure skating is definitely one of those “make yourself look like an ass” Kinect games. It also has the capacity to burn some calories, although it’s no EA Sports Active 2.

Deca Sports Freedom will include online play, as well as two-player co-op and competitive play. For example, you can play doubles in tennis — either on the same team, or against each other. In addition, you can unlock Adidas-branded clothing for your Xbox 360 Avatar by doing well in the game. Hudson hasn’t announced a price yet, but if the other eight games work as well as tennis and figure skating, Freedom could be a good purchase to show off Kinect to your families.

Filed under... #Destructoid on assignment#Hudson#Kinect