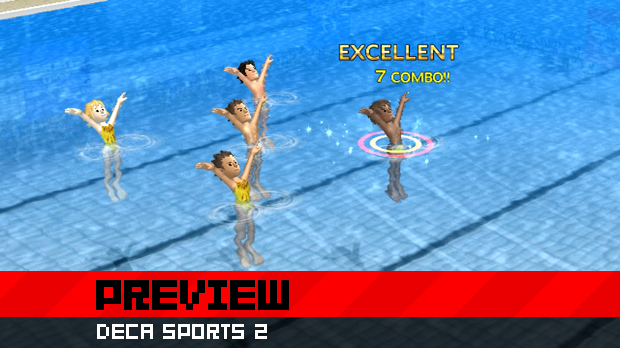 Hudson surprised us all and had a little setup at the Konami Gamer’s Day last week, where it was showing off three of its upcoming games.

Well, I should say they had over 12 games if you want to count all ten new games appearing in Deca Sports 2 as separate titles. What better way to sell a game by saying there’s ten games on one CD? (Seriously, it works all the time at my retail job.)

That’s right, Hudson is coming out with a new Deca Sports title for the Wii later this year and some of the games are pretty fun! Hit the break for the lowdown.

I’m surprised to say this as I haven’t really liked any of the compilation Wii games, but I really enjoyed Ice Hockey. It reminded me a lot of Wayne Gretzky 64, minus the extreme checks and fistfights. It was very easy to learn the controls the game just felt very smooth.

I only watched Tennis and Speed Skating, and both looked alright. I don’t quite understand the inclusion of the Tennis game as everyone that owns the Wii already has Wii Sports. I’m really looking forward to seeing some of the other games, specifically the Dodge Ball game.

Actually, here’s a good reason why they included Tennis in the game — Deca Sports 2 supports Wi-Fi. Only Tennis and Ice Hockey can go online, though. Hudson is working on getting some of the other games to work online before the game is released, and there will be leaderboards as well. Multiplayer will also range from two to four players depending on the game.

One other new addition to the Deca Sports franchise is the ability to create custom teams. There will be a lot of options available to the player. For instance, you can create a hockey team where all the players all have high strength, a team made of quick players or you can make a team that has a mix of different traits. Each perk has a downside though, such as a character that has high strength will have low speed.

If you liked the original Deca Sports, then you’ll definitly enjoy Deca Sports 2 when it’s released later this year.