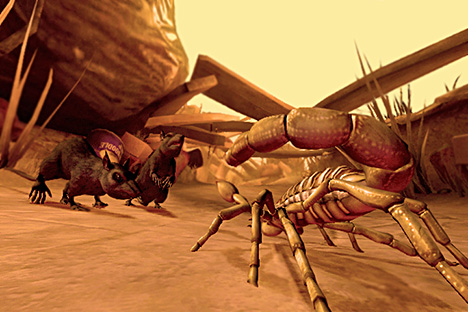 A dark, dank environment appears before you. It seems like a small area, if only because the lack of light makes it difficult to see very far. But you hear a faint skittering off to one side, and then a brown mantis edges into view. The “camera” doesn’t move to follow it; it’s stationary, as if you’re watching recorded footage, so all you see is the mantis crawling around. And then, in a flash, the insect is gone — devoured by a gila monster; it now sits contentedly in front of you, licking its lips with its forked tongue.

This is the opening movie that plays behind the “press A” main menu of Rainbow Studios’ Deadly Creatures. As you can imagine, the game like nothing else on the Wii — or any other console, really, for that matter — a creature combat adventure with an intriguing, overarching human storyline that takes place around the starring arachnids’ micro-scale world. I saw the finished game yesterday, and it’s looking fantastic. Hit the jump to discover how to take out tarantula hawks in one hit — if you’re playing as the scorpion. 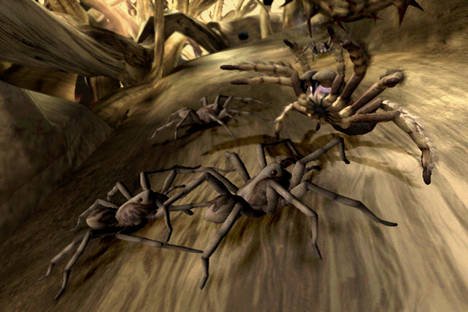 The game begins with a voice-over from Billy Bob Thornton, who plays the part of Wade. It sets up the story, which is told in flashbacks (à la Pulp Fiction). A cutscene follows, and the kicker here is the last line from Wade: “Who are we diggin’ up, anyway?” So right from the get-go, you’re captivated by the story; here’s how lead designer Jordan Itkowitz explained the narrative to me:

Because you’re a tarantula and a scorpion, you’re seeing Struggs [Dennis Hopper] and Wade’s narrative play out over the game, and always from that kinda “removed” perspective — they’re always these giants. But you’re able to go to places and reveal details and see things that the human eye can’t. … We just continually build the story like that — multiple layers, all the time. It was really fun to tell a story that way, through the eyes of two really unlikely protagonists.

The game is split up into ten chapters; you play as the tarantula in the odd-numbered chapters, and the scorpion in the even-numbered chapters. Basically, Deadly Creatures is a combat-focused action/adventure game. You traverse the world fighting insects and other (in many cases, much larger) creatures, so the combat has to be very well done for the game to be fun. Yes, there’s waggle, but I never found it obnoxious; in fact, it seemed very natural. 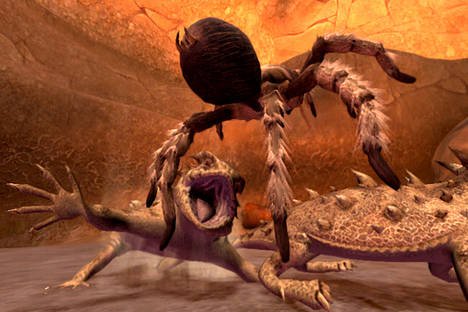 Basic strikes are performed with the A button, while a Wiimote motion does a heavy attack. Since the tarantula is more of an “agile ninja,” you can jump with it (press Z); when playing as the slower, more tank-like scorpion, Z blocks — the game becomes more of a strategic endeavor in that sense. Later in the game, the tarantula unlocks attacks to help it be more stealthy: you’ll be able to fire blobs of silk to trap your prey, and you’ll also get an awesome pounce attack (directed with the IR pointer).

The game has some rudimentary “RPG-lite” elements to it. Killing enemies rewards you with points, and you’ll unlock upgrades (such as new moves and increased attack power) at certain point levels. Each chapter also holds a few green crickets, which, like Gorgon eyes in God of War, will increase your health bar. In fact, Itkowitz had quite a reverence for David Jaffe’s seminal action title, the first chapter of which he referred to as “expertly paced” and “textbook for how to pull somebody into an experience.” 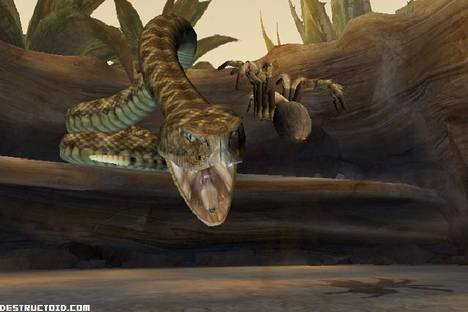 In that vein, Deadly Creatures features a boss encounter with a rattlesnake in the first chapter, which is one of a number of many-times-your-size enemies you’ll face throughout the game. After a QTE-filled fight (don’t worry — again, it’s not obnoxious), you don’t actually kill it; it’ll pop up at a few other instances — including the final boss battle. Going back to the dual-angle storytelling style, the end of the game has you fighting the rattlesnake as the tarantula while something else is going on inside a building; you won’t find out what’s happening until you play the next chapter as the scorpion.

Every chapter includes some story bits where you’ll hear about what Struggs and Wade are up to. Sometimes, it’ll be exposition to add to the narrative; other times, it’ll just be some banter to help flesh out their personalities. Continuing on in the first chapter, your objective is to find and fight the scorpion; after that battle, the scorpion drops into a hole, which is where the next chapter takes off.

Instead, I moved on to the fourth chapter, which took place in the same desert area as Chapter 1. However, there isn’t a lot of backtracking in this game — you won’t be playing through the same areas as both creatures, but they’ll take place in the same world, and you’ll often be able to see the connections (e.g., “Oh, so there are some webs — a path for the tarantula”). As I said, the scorpion is more defensive; its tough exoskeleton provides armor, and its pincers can block basic melee attacks. The tail isn’t just used for stabbing; it can also swipe to clear multiple enemies away. 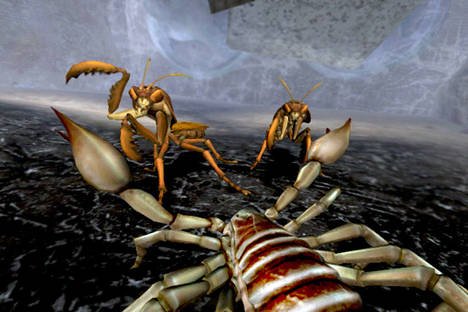 The scorpion’s unlockable attacks include a very useful burrowing move. When you’re on soil, you can burrow into the ground and then pop up to lash out at your opponent; against tarantula hawks, it’ll be a one-hit kill. The scorpion also has some bad-ass finishing moves, which involve QTEs. For example, in one of them, it flips its enemy on its back and stabs it in the throat with its stinger. Enemies include other tarantulas, gila monsters, horned lizards (which can shoot blood out of their eyes!), and swarms of blood-sucking wasps that have to be swatted away with the Wiimote.

Deadly Creatures seems like it could be a great third-party Wii title, and we certainly can’t have too many of those. It’s one of the most unique games I’ve ever played, and it’s obvious that Rainbow put a lot of effort into it. The game ships next Monday, February 9th, and from what I’ve seen, it’s definitely going to be worth a look.