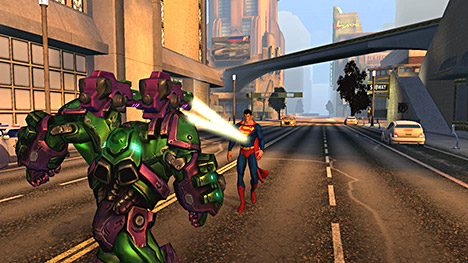 No, you are not likely to find yourself shouting that phrase while playing Sony Online Entertainment’s upcoming PS3/PC action MMO, DC Universe Online. The game isn’t about putting you in the shoes of your favorite DC Comics hero or villain; instead, you create your own character and take him/her to the streets of Metropolis and Gotham. But along the way, you’ll definitely run into the classic DC comic book heroes, and that’s where things get interesting.

If that sounds like fun, follow me to the jump to read all about DC Universe Online. 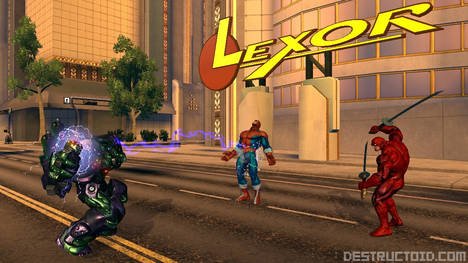 Generally, when people think of MMOs (massively multiplayer online games), they think of the PC — aside from Final Fantasy XI, Phantasy Star Online, and a few others, there haven’t been all that many MMOs on consoles. But recently, a number of console MMOs have been announced; among them is DC Universe Online. The game is in development at SOE’s Austin studio, but they’re very early on in the process — what I saw yesterday was, according to creative director Jens Andersen, a pre-alpha build of the game. In fact, they’re still adding features, and there’s no release window yet.

Jens explained that SOE didn’t want to make another MMO where the player is just “clicking away,” doing the same repetitive basic functions over and over. Unlike, say, World of Warcraft, the obvious impetus behind a gamer wanting to get into something like DCUO is the classic idea of wish fulfillment — the superhero fantasy (refer back to the first line of this preview). But in the context of an MMO, it’s not nearly as fun if everyone’s just flying around as Superman; plus, if you create your own character, you’re much more likely to be invested in the experience.

So to start out, you’ll create your own hero or villain. There are two ways to do this: you can either be “inspired by” a particular DC hero or villain, or you can build your character from the ground up. There are four main categories to consider: the super power (e.g., electricity, mind), the power source (e.g., ring), movement (e.g., flight, speed), and abilities (e.g., strength, fast metabolism). If you do decide to create someone who takes after, say, Superman, you won’t be constrained in any way — for example, you could get rid of his flight and leave him with Flash-like speed. The devs weren’t showing off the actual character creation system just yet, though. 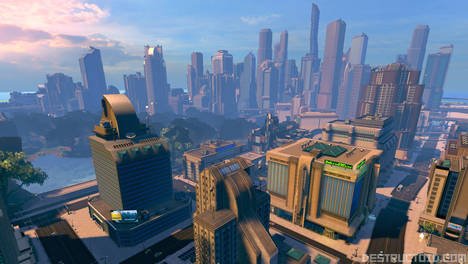 Jens had created a Joker-inspired no-goodnik who looked like Sweet Tooth (of Twisted Metal fame), and he dropped him into Metropolis to wreak some havoc. The game features two main play areas, the cities of Metropolis and Gotham; each is a massive, seamless open world. We hung around in Midtown, for the most part, a large and varied playground — but it’s just one district of New Troy, the central island/borough of Metropolis, which only comprises an eighth or so of the entire in-game city. Take my word for it: it’s frickin’ huge. There will also be other unique locations for special missions, but they weren’t being shown off at this time.

Sweet Tooth’s (let’s just call him that from here on out) mission in this particular instance was to pilfer some DNA from groups of crates. Jens died a few times and simply respawned after a six-second wait, which prompted me to ask if there was any real penalty for death. He explained that there wasn’t, aside from the spawn timer, but since mission objectives are timed, you can fail if you don’t complete enough objectives because you keep dying. 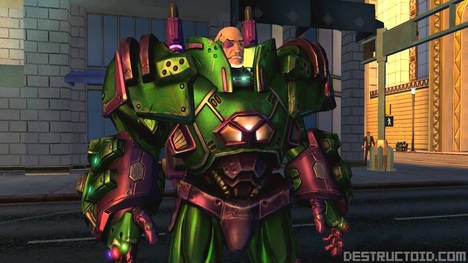 After stealing the DNA, Sweet Tooth headed into S.T.A.R. Labs to assist Lex Luthor, who was outfitted with some awesome mech armor, in taking down Doomsday (presumably for Luthor’s own nefarious plans). As I said earlier, you’ll encounter such “iconics” — the Green Lanterns and Jokers of the world — randomly through your quests. For example, if you’re investigating a string of high-rise robberies, you might find Catwoman in one of the suites. In addition, each side has its own “information broker” who gives you, and directs, your missions: Oracle for the good guys, and The Calculator for the mischief makers.

Jens and his counterpart, senior producer Wes Yanagi, explained that DCUO isn’t class-based like typical MMOs; instead, there are three different roles — offense, defense, and support. That way, it’s never a question of lacking a Paladin for a mission; in this game, characters are free to take on any of the aforementioned roles. Jens and Wes repeatedly stressed that the game is an action title taken online; the gameplay reflected that. Think of games like Spider-Man 2, Crackdown, and Marvel: Ultimate Alliance. In DCUO, you’ll be kicking ass in an open world, just like in those games — only this time, it’ll be online with thousands of others. 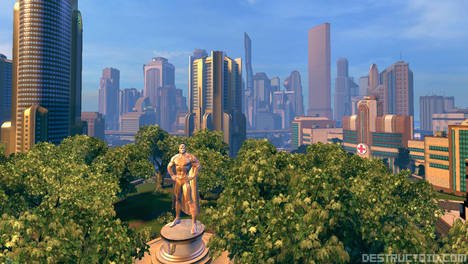 I saw the PC version, but a cool wrinkle is that either control configuration can be used on either platform. If you want to play with a keyboard and mouse on PS3, you can do that, and if you want to plug your DualShock 3 into your computer, that also works. Jens had both plugged in, and switching occurs on the fly in-game. As for cross-platform play, I was told that it’s definitely doable from a technical perspective, and SOE would love to do it, but nothing has yet been finalized on that front.

The game’s controls translate very well to the PS3 controller, since it’s an action title — the face buttons are used for attacks, while L2 and R2 are modifiers to use your powers (for example, another character I used had an awesome freeze ray, activated by holding L2 and pressing triangle). L3 activates and deactivates “movement mode” — this controls whether you’re walking around normally, or taking advantage of your character’s power (like flying, for example). Simply looking in an enemy’s general direction will target it, but you can also lock on manually. 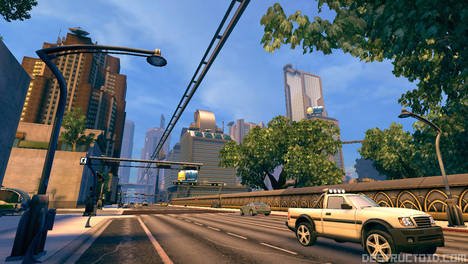 Of course, with a game based on comics, authenticity is of paramount importance. SOE actually brought in a comic book store owner from Austin to ensure the game’s continuity with the DC Universe, and WildStorm’s Jim Lee did the art for the game. On the narrative side, veteran comic writers Geoff Johns and Marv Wolfman put together the game’s backstory.

I came away very impressed with what SOE has put together so far, especially considering that it’s in pre-alpha. It has a high level of polish already, and more importantly, it’s fun to play. And at this stage, SOE isn’t sure what kind of business model they want to go with. But whatever they decide, I could easily see DC fans investing hours upon hours (and many, many dollars) in DC Universe Online if the final product fulfills the promise of the build I played.