DC Universe Online has been edging ever closer to a game we can actually play in our own homes, so much so that we got to play a bit of it a couple of weeks ago at a pre-E3 event Sony Online Entertainment held. The release is so near that it’s okay to start anticipating it now. November is what we’re hearing.

You probably know the rub by now: You’ll create a character which will be either a hero or villain in this online game for PC and PS3. Then you’ll set off to do either good or evil, taking on missions to earn experience points to then put back into your character to make you a more powerful hero or villain. You’re a badass in a world of badasses, if you will.

Read on for our preview of DC Universe Online.

In the demo we played, we were dropped into a segment were we played a hero that was out to help the helpless Robin, Batman’s dud of a sidekick. Robin was sidekick-napped by the always lovely/bitchty Harley Quinn. This mission has us out to help Batman find Robin somewhere in Gotham City.

The demo was basically an exploration of how you can customize your character and use its powers to take down the thugs that lead up to an actual boss fight with Harley Quinn herself. We played as a highly acrobatic character that has crazy attacks. We could climb walls, flip, dash away, air recover and even mount a zipline to plant feet right into a goon’s face. The game’s auto targeting system made it easy to latch onto some of the larger, more difficult enemies, though you could tap R1 to bounce targets and mix things up. 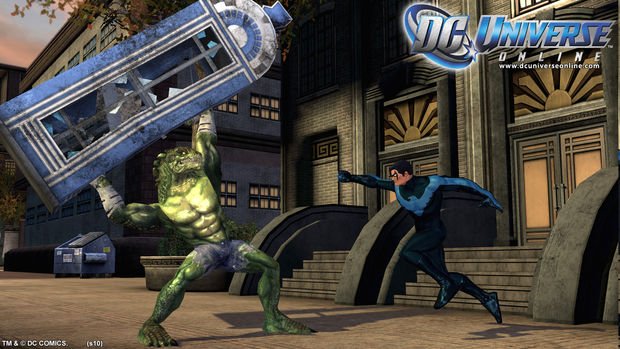 Some of the physics engine was also on display in this demo. One of our powers was an implosion grenade. When dropped, it sucks all the surrounding items (even set pieces) in, which really “sucks” for your enemies.

We took on various goons with the PS3 controller connected to a PC, which works beautifully. There’s an intuitive command menu that assigns face buttons to moves and can be shifted back and forth with the R2 and L2 triggers. We didn’t miss the mouse and keyboard at all, and we don’t think you will either.

When we finally encountered Harley Quinn, she was surrounded by a bunch of pesky assistants, all of which were at battle with Gotham’s finest. This distraction allowed us to go right for Quinn, who stood guard in front of a bound-up Robin. Fortunately, her large, hammer-based attacks were so insane that she’d eventually make herself dizzy, which left her open for some quick attacks. A few rounds of this and we took her out and save the worthless sidekick. 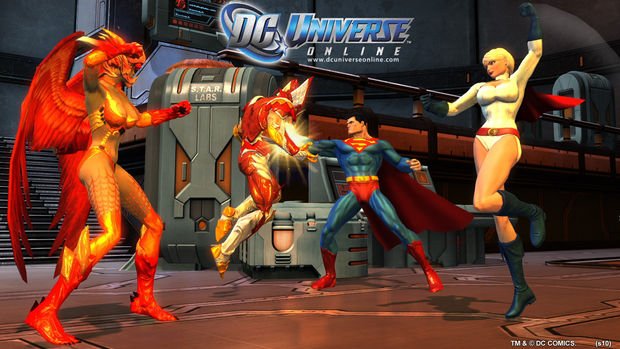 With her defeat we acquired her jester’s hat, which comes with stat boosts when equipped. But don’t worry about her goofy hat compromising your hero’s look that you put so much into, as we were shown how you could equip your spoils and then go back to edit your look, still maintaining the perks that come along with it. Of course, we made our hero almost completely naked after finding this out. We basically stripped him, save for the jesters hat and some superhero briefs. Classy.

It’s easy to see how fun this kind of world would be online after our demo. The combat isn’t quite as fluid as you’d hope to see in something that looks and feels just like a console-only online game, though. There’s nothing inherently bad about it, but it doesn’t quite have that finesse that we’re hoping for. They’ve still got time before the release later this year, so we’re not too worried. On the upside, DC Universe is looked quite slick in the visuals department on the higher end PCs we demoed it on. It’s been a bit since I’ve seen the game (maybe Comic-Con last year), but it’s looking to be shaping up quite nicely.

We’ll get a more in-depth hands-on later this year.