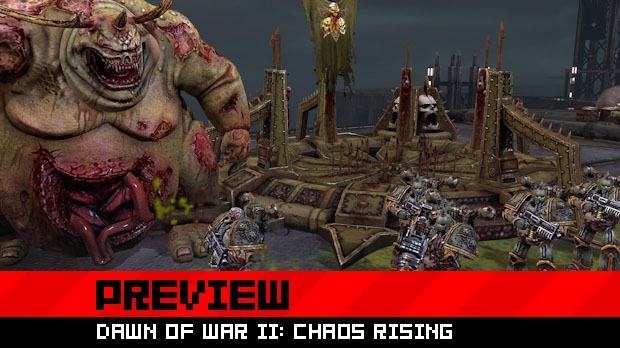 If there’s one thing Chaos loves to do, it’s to rise. Chaos is a bugger for a good rise. Fortunately for us, the Blood Ravens are around to put a stop to such silly shenanigans, so when the Black Legion decides to get all up in Calderis’ business, slaughteriffic fun is guaranteed for the family.

Chaos Rising is the new expansion pack for Dawn of War II, bringing a brand new faction to the table, along with a hot new unit for each of the established armies and a brand new single-player campaign. Yours truly was in San Francisco to check it out. Having played a slice of the campaign and gotten to grips with the Chaos army, what do I think? Read on for the full preview of Dawn of War II: Chaos Rising.

The Tyranids were bad enough. In Dawn of War II, these slavering aliens arrived to Calderis with one plan in mind — mindlessly consume everything. They are not the worst of it, however. With the Tyranid fleet being pushed back, the Blood Ravens find themselves facing a darker, more personal threat. The Black Legion have arrived to settle some scores, and they mean serious business.

The Chaos army is more brutal, more cruel, and more hard-hitting than the Tyranids, and you’ll quickly learn to respect them when you tackle the brand new campaign. The demo levels I played were short, but thoroughly intense, ending with a massive rumble against Black Legion Predators, Dreadnoughts, and Havoc Squads. They take almost everything a Space Marine army has access to, but they make it more sadistic, more versatile, and more cool than any chapter of the Adeptus Asartes ever could.

Fortunately, the Blood Ravens are helped along by a brand new hero character, the Librarian. He’ll acts as the spellcaster for the Space Marine army, able to not only buff and heal his allies, but devastate the enemy with a range of spells that can thoroughly decimate an enemy unit. Each of the existing races gets a new and powerful unit to help stem the Chaos tide. Orks get Wierdboyz, Eldar get Wraithguard, and Tyranids get Genestealers and Tyrant Guard.

As well as the new campaign and units, there will be a fresh Free-for-All multiplayer mode in which opponents will fight for control of seven Victory Control Points on the map. These matches can be played as eight one-on-one or two-on-two battles. They are huge, lengthy, and more importantly, fun. There are a bunch of new maps, including snow levels, to choose from as well.

Of course, this is all well and good, but there is something much more important to discuss — the Chaos army itself. How does it play? How much fun is it? What are the best units?

Let me answer those questions quickly for you. The Chaos army plays fantastically, it’s a ludicrous amount of fun, and the best units are pretty much all of them.

That said, I must reserve special praise for the Sorcerer. One of the three hero units players can choose for their army, the Sorcerer is as fun a unit as there’s ever been in Dawn of War. Not only does he have a deliciously over-the-top voice actor, his mastery of the Warp gives him stupendously brilliant powers. He can teleport from one place to another, allowing him to appear behind enemy lines and break their formation. He can possess an enemy unit and make them fight for him. He can fling energy balls and gain access to all manner of Tzeentch-blessed wargear, making him a fantastically fun character to control.

Not that the other units don’t hold their own either. The flexibility of Chaos allows players to craft a terrific army catered to speed, close combat, firepower, or balance. There are fast moving melee fighters in the Bloodletters, there are movement-hampering defensive units in the Plague Marines, and there are terrifyingly huge war machines such as the Blood Rider and Great Unclean One.

The underlings of the army are the Heretics. These weak melee units can build shrines and worship the Chaos Gods, granting the rest of the army unique powers such as accelerated healing. The nature of their worship and buffs granted to players are determined by the hero that players choose. Each hero follows one of three Chaos Gods, and the Heretics will worship accordingly. Being religious fanatics, they are also big fans of suicide bombing, and players can explode these units at whim.

Chaos Space Marines are the backbone of the army. As strong as any Imperial Marine, the Chaos Marines can dedicate themselves to either Khorne, Tzeentch or Nurgle, bestowing weapon upgrades based upon the player’s choice. For instance, Khorne Marines get access to powerful chain axes, while Tzeentch Marines get bolters loaded with Inferno Bolts.

The idea of God dedication is wonderfully adapted from the tabletop game, and permeates throughout the entire Chaos army. I chose to field a Thousand Sons army (the game’s army customization screen has preset paint jobs for each of the established Chaos Legions) and the dedication to Tzeentch allows me to field a small but powerful ranged force. Terrible spells and Predator tanks equipped with Warpfire were the order of the day. Other players can go the Khorne route, picking a Chaos Lord as their hero and outfitting the army with all manner of close-range weaponry. Meanwhile, Nurgle is all about defense, fielding slower units that can absorb a lot of damage.

Warhammer 40,000 fans will note the lack of Slaanesh, Chaos God of pleasure, which is a shame. I was informed that the youngest of the Chaos Gods didn’t lend himself well to an action-packed strategy game. This is something of a shame, as I’d love to have had some Noise Marines, but there’s so much else to play with that it’s a small loss in a big army.

As if all this wasn’t sexy enough, we have the various God favors to choose from. If a player can earn enough favor from the Chaos Gods through slaughtering the enemy, they will get their hands on a variety of thoroughly deadly special abilities, such as a portal that endlessly summons Bloodletters for a period of time, or a bath of Warp flame that annihilates everything it touches. If you’re interested in out-and-out destruction, then this is most assuredly the army for you.

Dawn of War II: Chaos Rising is a must-buy for fans of the main campaign. The campaign is as rewarding as ever, and the new Chaos army is easily the most fun of the races to control. Versatile, powerful, and undeniably badassed, you can expect to see the Chaos army become a huge mainstay in your future online DoW battles, of that I can be certain.

Chaos has most certainly risen, as will the crotch area of your pants when you play this expansion.