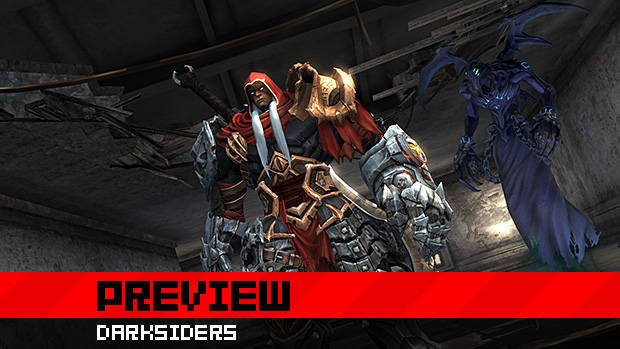 THQ’s Darksiders is a game I’ve been keeping an eye on ever since it was announced way back at E3 2007. It’s been repeatedly delayed; the game is now set for release on January 1, 2010 (how very cheeky of you, THQ).

But I recently got some hands-on time with the comic book-styled action-adventure game, and from the time I spent with it, I gathered that the full product may very well be, as Jim hoped, ridiculously awesome. Hit the jump to read about things like killing demons with a big-ass sword … while riding a horse. 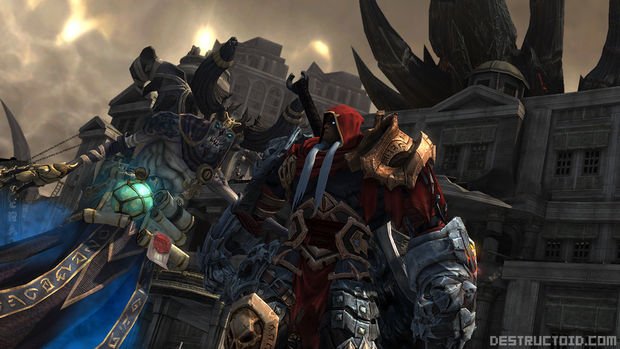 There’s more to Darksiders than meets the eye. People seem to be worried that it’s yet another cookie-cutter third-person action game, but that’s not what I saw. The game has an intriguing, unique storyline, and its gameplay takes elements from a wide variety of genres. Here’s the deal: you play as War, one of the Four Horsemen of the Apocalypse. War has been accused by the Charred Council — a mediating body between heaven and hell — of prematurely triggering the apocalypse (y’know, where heaven and hell descend on Earth to fight it out once and for all, with humanity caught in the middle).

The game actually kicks off during the apocalypse, when War is at the height of his power. But shortly afterward, he’s brought in chains before the Charred Council. They strip him of his abilities and send him back to Earth, doomed to walk the now-desolate landscape for all eternity. War isn’t going to take this lying down, though — he’s been falsely accused of a crime he didn’t commit, so he sets out to right this wrong and find out who was really behind the early apocalypse. (After all, it isn’t due to hit until 2012, right?) 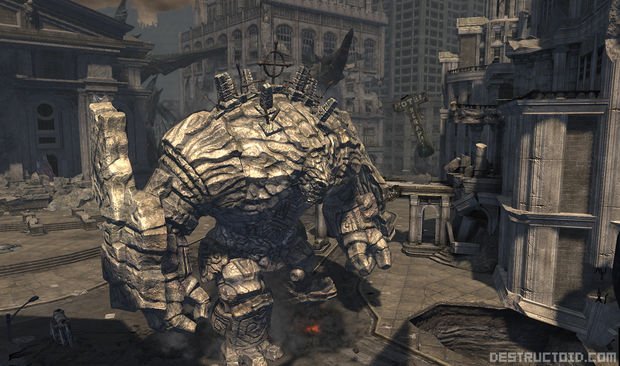 Darksiders is the first title from Vigil Games, an Austin, Texas-based studio co-founded by comic book writer/artist Joe Madureira. (You may know him from his own series, Battle Chasers, as well as Marvel’s Uncanny X-Men.) Madureira serves as the game’s creative director, and that comic book influence is apparent in the game. You’ll see Gothic and demonic architecture juxtaposed with extant modern human buildings. Everything in the game was designed with that classic, Gears-style “bigger, better, more bad-ass” mantra in mind — even doorways aren’t just simple wood-block-on-hinges affairs.

The whole game takes place on Earth, which is missing six billion inhabitants; in their stead are angels and demons, remnants of the cataclysmic clash that eradicated the human race. With such a killer premise, I was surprised by how often THQ’s Waleed Kamel, who explained the demo to me, drew comparisons between Darksiders and the Legend of Zelda games. I can see where he’s coming from; Darksiders features the same basic hub/dungeon structure that Zelda has (you’ll come upon doors that can’t be opened until, for example, you’ve upgraded your powers).

Combat in the game is immediately reminiscent of franchises like Devil May Cry, but Kamel noted that it’s less focused on memorizing combos and based more on rhythm. In that way, it made me think of the melee combat in Uncharted: Drake’s Fortune, where you don’t want to merely mash buttons. Here, timing your button inputs correctly will allow you to chain attacks together, making for some awesome-looking demon killing. And don’t worry — Kamel assured me that there are no quick-time events in the game. You can transition seamlessly between your weapons — which include a sword, pistol, and scythe — during combat. So just like in Bayonetta, you can slice some enemies and then shoot ’em up, too. There’s also a wonderfully gory God of War-style quick kill for enemies who are low on health. 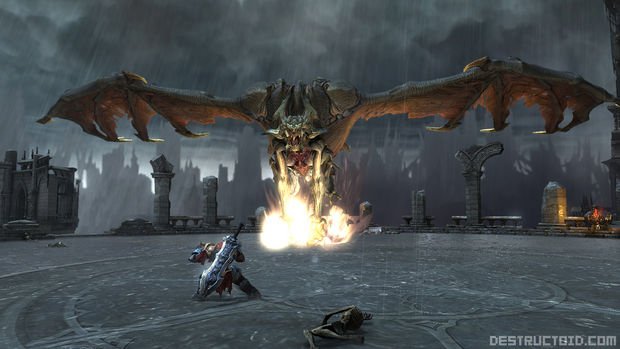 But what I found to be worthwhile in Darksiders was the combination of this classic action game combat within the framework of an adventure game. You collect blue souls, the game’s currency, by killing enemies; these can be handed over to the demon Vulgrim, the merchant of the game, to upgrade your weapons and “Wrath” powers (magic). The prolific voice actor Phil LaMarr, whom you may know as Vamp in the Metal Gear Solid series, plays Vulgrim. In fact, Darksiders has a pretty significant voice cast. Liam O’Brien, best known for his role as Gaara on Naruto, voices War; Mark Hamill basically does his Joker voice as The Watcher. And Moon Bloodgood, of Terminator Salvation fame, voices the Archangel Uriel.

The Watcher is another interesting character. Since the Charred Council doesn’t trust you, they send the Watcher to accompany you back to Earth; continuing with the Zelda comparison, Kamel likened him to an “evil Navi.” The Watcher is “not someone to be trifled with” — because you’re so weak, he has complete control over you. He can bring you to your knees, and he could even kill you on a whim if he wanted to do so. He acts as a guide of sorts, but there’s definitely not a congenial relationship between him and War.

A creature that is loyal and helpful is your horse, Ruin. This mighty beast is actually invisible — the “phantom steed” is made of ash, so he merely disintegrates when he’s hit. You can summon him at the press of a button as long as you’re not in an enclosed area, and he’ll even catch you if you’re falling. (Of Ruin, Kamel said, “He’s like a bad-ass Epona.”) Ruin will allow you to get to places you couldn’t reach without him, and he’s also a necessity in certain combat situations, à la Agro from Shadow of the Colossus. In a boss battle in the Ashlands (which are literally composed of human ash, by the way), you can’t step on the ash without being devoured by the boss. But you can ride around on Ruin with impunity. 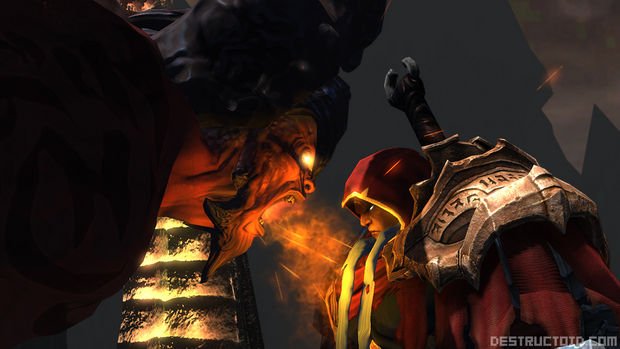 THQ and Vigil wanted to stress the puzzle elements in the boss battles. It’s not just about hacking away until a screen-filling health bar is depleted; instead, like Zelda, you’ll often receive a new weapon or ability in a dungeon, and — guess what? — you’ll need to use it against the dungeon boss. I saw this in action when War was given not a hook shot, but a “cross blade.” It’s a sweet bow, but what’s neat is that you can lock on to multiple targets with it (it’ll fire at all of them at once). In the fiery dungeon, the boss isn’t harmed by regular attacks. But the cross blade also transfers elements. If you hit something that’s on fire, your arrows will then be imbued with flame — and that’s how you can defeat the boss.

Since it’s an action-adventure game, a major part of the game is exploration. I spent some time running around and found what looked like a subway entrance — it led to a small underground area where, after doing some platforming, I came upon a chest full of souls. Sweet! There will also be a number of sections where you’ll be given a heavy weapon to play with. These segments are intended to break up the gameplay. One of the special weapons was a Fracture Cannon, a demon-designed remote-detonated rocket launcher. You have unlimited ammo in the short time you have the weapon, so it’s a blast (ba-dum-tish) to use.

The environment is interactive, too. If something looks like it can be used, then it can be used. I killed many a demon by picking up objects like cars and hurling them at the monsters. It’s also a lot of fun to break a fire hydrant and watch the geyser-like torrent of water raise enemies high into the air. 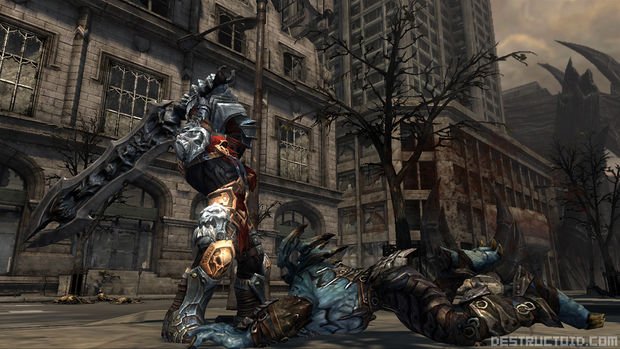 Darksiders incorporates gameplay from plenty of sources, and its developers aren’t afraid to admit it or even to invite comparisons. That’s because they feel as if they’ve got something special on their hands, and while we’ll have to wait until New Year’s Day to know for sure, I definitely enjoyed what I played so far. For more, hit up the game’s official Web site.