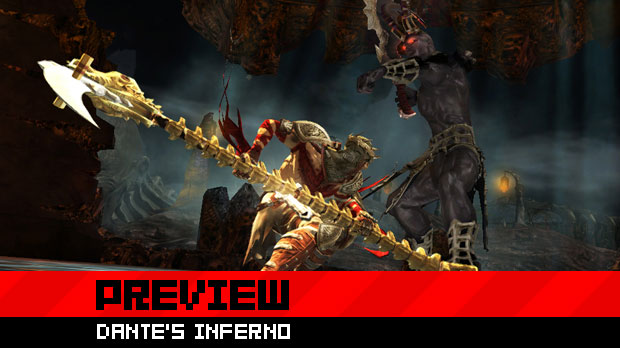 Look, I don’t care that Dante’s Inferno is based on The Divine Comedy. Nor do I care that literary nerds are getting their panties in a bunch over what Electronic Arts is doing here. It’s a videogame, and I play games to have fun.

And fun is what I had when I played Dante’s Inferno at EA’s Spring Break event earlier in the month. My hands-on time was short and it wasn’t in an ideal situation (the event was packed with press in a small space with loud music blaring), but I did enjoy my small taste of Hell.

Hit the break and find out how fun it is to go to Hell.

The demo begins with Dante riding on the Charon’s boat. Charon is the ferryman that takes the dead on his boat into Hell. In the game, Charon is the boat. If you read my coverage of the Dante’s Inferno panel from WonderCon, then you already know that the team re-imagined Charon as a living boat. If that’s not humiliating enough, wait until you hear what Dante ends up doing to poor Charon later in the level.

Anyway, Dante’s Inferno felt a lot like God of War. You have your heavy and light attacks, you can juggle enemies, and your Scythe can even extend like a whip in similar fashion to the Blades of Chaos. You can grab enemies and that mechanic is a little more thought out in Dante’s Inferno. Later in the game, I came across some demon babies with blades for limbs (EA sure loves babies). I was able to grab a baby, impale it and swing my Scythe around to smack the baby against other enemies.

Dante can block, roll, double-jump, use the Scythe to swing on objects, and use magic attacks as well. The first magic attack Dante gets is the projectile Cross attack, where Dante throws Holy Crosses in the same way that Ryu Hayabusa from Ninja Gaiden throws shurikens. You’ll have a health and magic meter, and to replenish either, you need to open up chest-like objects that hold energy. So yeah, a lot like God of War.

On Charon’s boat, Dante encounters various types of ground and flying type demons. When you’ve weakened enemies down, a button will float above their head and you can perform finishers by pressing the right buttons that pop up on the screen. For the most part, the buttons that you need to press appear right above the creature’s head. Whenever you needed to press the O button, however, it would appear on the lower right of the screen. I messed up a lot of the QTEs because of the odd placement, but I was told that they would fix the O button placement in the final game.

Near the end of the battle on Charon’s boat, a giant demon with a rider appears with more monsters. After killing the giant demon’s rider, you can actually hop on and take control of the demon. Dante can use the demon to pound enemies and make it bite other demons’ heads off. After everything was clear, Dante walks up to the front of the ship where Charon’s head is. A quick time event takes place and Dante commands the demon he’s riding on to rip off Charon’s head. He then has it chuck the head off into the distance like a football.

From here, I make my way across the first layer of Hell, fighting more and more creatures. A number of sections are closed by demon doors, which the player needs to impale with his Scythe. Players then rapidly press the circle button to force open the door. While funny at first, it grew old really fast.

At one point, I run into Charon again. The demon Dante was riding on has one Hell of a throw and manages to throw Charon’s head through a wall. You can leave his head sticking through the wall, or just be a total bastard and actually push his head out and into the abyss below.

As I was getting close to the end, I came across a damned soul. The poor soul is on his knees, naked and penisless (Hell sucks!). When you encounter these penisless people, you’re given two choices: save or kill. The save feature wasn’t ready in this build so I went with the kill choice and jammed my Cross into his skull. I was told that saving a soul wouldn’t be as simple, as you’ll need to go through a quick time event.

At the end of the demo, Dante confronts King Minos, the demon that judges the damned. The boss is huge and the battle is almost RPG-like. First, Minos attacks. Then, he leaves himself vulnerable, giving you the chance to attack. It goes back and forth like this with some demons spawning midway through the fight. There are a couple of quick time events during the boss fight, and finishing off Minos is rather awesome. Minos has a really long tongue, and at the end, you grab Minos’ tongue and stick it on a cog wheel. You then go through a QTE and have to spin the wheel until you split open Minos’ head.

Overall, it was a Hell of a good time. It plays out a lot like God of War and that’s not a bad thing at all. I couldn’t hear a thing so I couldn’t tell what was going on with the story in this particular section. I really want to see how EA is going to make this stand out from God of War. Hell, even the God of War team wants to see how it will stand out, too.

Look for another preview of Dante’s Inferno sometime next month. It’ll be a lot more detailed, I promise.