Company of Heroes Online is a free-to-play multiplayer real-time strategy game from the people at Relic, which are the same guys that made Dawn of War and the original Company of Heroes, of course. It is coming out this September (it was originally announced for Asian territories), but I had a chance to play this WWII-era RTS a couple of weeks ago from an early English-language version. When I played it, the game was running an open beta in Korea, and we saw people online, having a blast. I didn’t feel up to going against those seasoned players, so I took on a fellow games writer at the event. I still lost.

In CoH Online you’ll command your company to gradually move across Europe in the second World War. You’ll choose from six divisions, each with their own powers, and then go up against up to eight players on the map. You’ll drop in your division’s own heroes, plop down crazy war abilities, and scramble to build your side up with upgrades, working frantically to make sure you aren’t caught with your pants down when the enemies roll into your camp.

Read on for our preview of Company of Heroes Online. 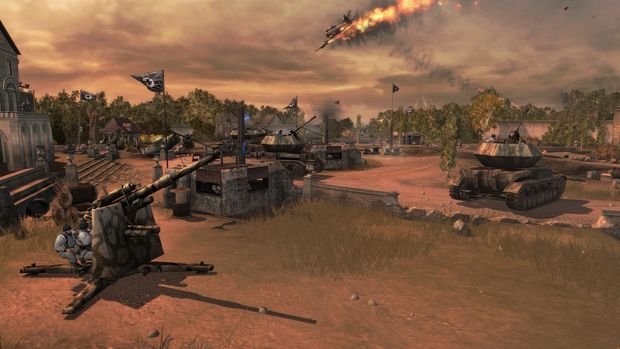 First off, let’s get to the whole free-to-play thing. From what I could tell, this is not a gimped game that is looking to microtransaction you to death. Game director Tim Holman told us that the game is fully playable as it comes, and you’ll only need to dip into the pay side if you want to buy items to help you even the odds more quickly. All of the abilities you can purchase can also be unlocked eventually through normal game progression. Beyond this, the game features smart matchmaking that won’t leave you feeling inadequate when you go up against Mr. Pay-and-Win. I can’t speak to the balance yet, but it sounds like Relic is working to make sure this is fair for everyone. And, more importantly, fun for those who choose to go free all the way.

Speaking of game progression, you’ll hold on to your earned upgrades as you continue to play CoH Online, a new aspect that players of the original game will surely appreciate. No more building up a massive force to just lose it all once the match is over. You start out as a commander that can follow different upgrade paths, each with their own special abilities, upgrades and special attacks. As you play, you’ll eventually find someone that sucks enough to win against (I didn’t!) and earn points that you can spend to slowly pull your army out of suckage. You’ll work your way through your own ability tree, unlocking each in a path until you’re so stupidly strong that no one is going to go up against you. 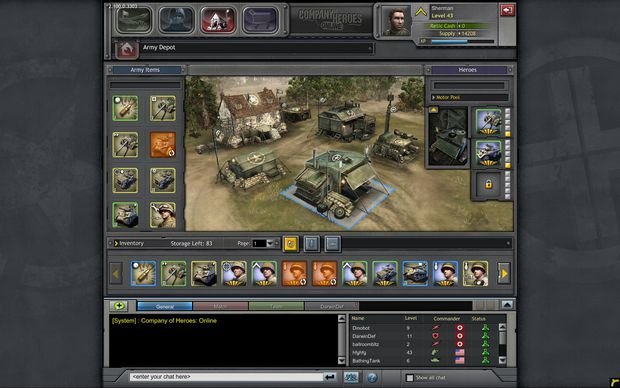 Speaking of stupidly strong, THQ was nice enough to give us an ungodly amount of points to put into our first game. With this I blazed through my chosen commander’s path, unlocking everything. Honestly, it was daunting once I got into the game. I was probably less focused on building up my defenses and more focused on seeing what all of my abilities looked liked. Yeah, that’s totally why I lost.

Even items have upgrade trees, and I was able to point-plow my way through them to see with their highest form looked like. For example, my commander’s Bombing Run ability could be leveled up to increase the number of bombs dropped. The game’s Hero units are like regular units, but they level up from match to match, and gain additional abilities along the way. Given more time, I would have enjoyed a gentle escalation into chaos, with a gradual upgrade-and-see progression, but blowing everything up with max firepower is fun too.

The game looks great, or at least it did on the higher end gaming PC I was previewing it on. It sports a nice, dark look, with small but highly detailed buildings, vehicles, and locales. While I was busying creating and then toying with each new troop or vehicle, my opponent was taking his time, slowly building up his side so that he could create tanks. I was mindlessly frolicking across the lower right side of the map, thinking I may finally have enough resources built up to try some fun stuff. Suddenly I noticed that a massive tank was on my front doorstep. It was sad, really. THQ staff and other onlookers winced as my army slowly crumbled. I did have enough to use some of my Commander Abilities, but it wasn’t enough. The airstrikes were slow and pointless. Everything was on fire. I laughed a nervous laugh. 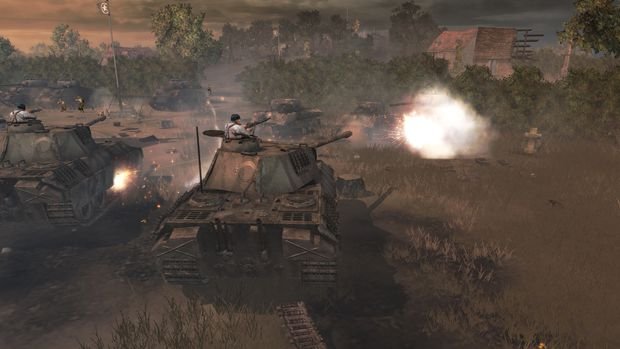 Company of Heroes Online is giving you a perfect excuse to start playing and ever stop. If you liked the original’s multiplayer, this is revamped in a way that rewards you for continual play. Oh, and totally free. And if you’re worried about the whole pay-to-play thing, look back at my play experience in this preview. I had access to everything, but just like in any good RTS, wining and losing has less to do with what powers you have and much more to do with solid tactics.