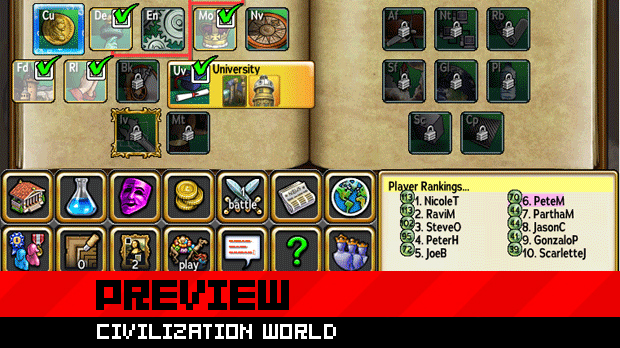 If game development were a tech-tree, then unlocking strategy gaming (an early tech), social media, and e-commerce would allow for the creation of 2K Games and Firaxis’ most recent incarnation of the Civilization series, Civilization World. Firaxis is no stranger to the pursuit of accessibility, having seen encouraging success with the highly streamlined Civilization Revolution in both the console and mobile sectors. In a space filled with click-to-win Facebook games, the need for more engaging fare is palpable.

As many mainstream developers look to expand their brands into the social space, the challenge becomes how to draw in existing hardcore gamers by increasing the depth of gameplay without alienating the casual crowd that makes the social gaming market so very profitable. One could even say that it would take a Wonder to bridge the gap, which is why I approached my recent time with an alpha build of the upcoming Civ World with great curiosity.

When you first begin navigating the game, the trademark density of units, buildings, techs, wonders, resources, strategies, options, and more that Civ is known for is immediately apparent. Thankfully, there’s a guided set of quests that walk you through the basics of building and gathering resources, each of which gives you resources of some sort to accelerate the initial growth of your city. Those familiar with the franchise will feel right at home and set to figuring out how to optimize resource yields, worker allocation, city builds, and scientific progression. 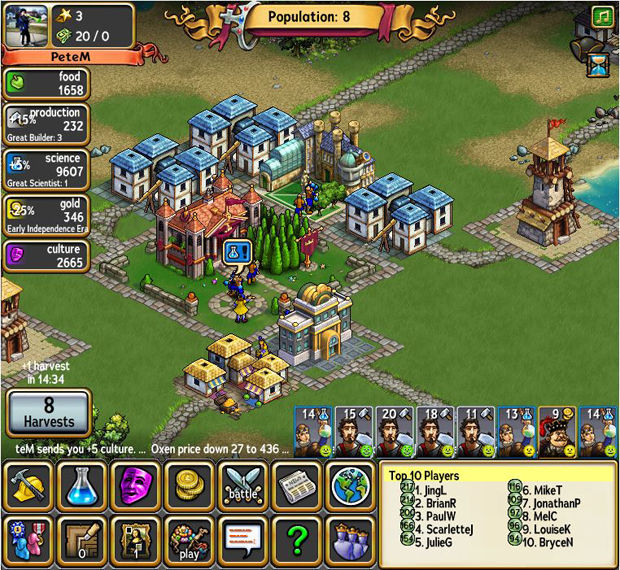 I saw three major differences between the Facebook entry and the traditional franchise during my time with the game. The first is how resources are gathered. Rather than a turn based accumulation of food, gold, research, production, and culture, Civ World adopts the social gaming convention of doling out resources on a timer. While “harvests” are accumulated that give you the option to gather resources immediately, there was a considerable amount of waiting for accumulation.

The game provides a number of puzzle based mini-games that you gain access to on a timer, and these go a fair way towards alleviating the pain of waiting for resources to gather. A caravan mini-game tasks you with creating a route to a nearby city. Completing it successfully nets you bonus gold above your normal accumulation.

A science-focused game has you using accumulated moves to navigate a small maze in order to unlock technologies early. The culture mini-games has you rearranging tiles to correctly recreate famous works of art. Additional bonus culture points can be amassed by getting consecutive tiles placed correctly, but the kicker here is that you are trying to match at the same time as other players. If you time it right, you can be a jerk like I was and swoop in at the last second and steal the last few matches, along with the associated culture points for completing a painting.

Which leads us to difference #2 – the social aspect. You will often be in competition with other players for bonuses. The game periodically starts events that confer a reward to the first player to build a particular type of structure, accomplish a given task, etc. While it is technically possible to play as your own independent city-state, your progress will be severely hamstrung if you do so. The game urges you early on to choose a civilization to join, and much of the progress you undergo will be in tandem with the other players that are a part of your civ. 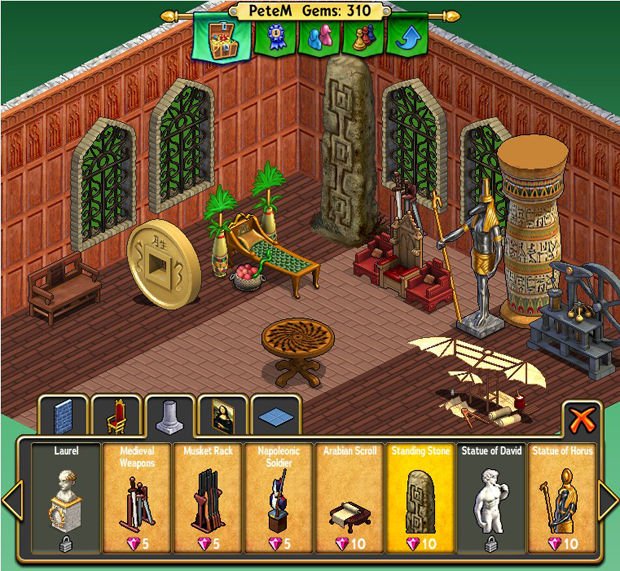 Completing wonders happens when enough great people are placed on a specific project. The catch here is that each player may only contribute one great person to any given wonder, meaning that a coordinated effort of players within a civ is required to hit some of the larger milestones within the game. Scientific research is also cumulative, the more players in a civ research a tech, the faster that tech unlocks; when it unlocks, it is available for all players within the civ. Moving from one era to the next is also a group effort.

The final and most pronounced difference was in combat. Barbarian attacks happen as an event, and like many other events in the game, they always effect every player within the civ. As such, it behooves all players on a given team to contribute what they can to the military efforts. Every unit deployed in combat against the barbarian horde adds to the total attack and defense strength of your civ, and there is an equal chance for each player to lose troops in a skirmish.

Rather than a tactical unit moving affair, combat plays out more like a card battle where the total military strength of the enemy and your civ are displayed so that you can easily deploy more troops if you feel the battle isn’t going your way. Troop types do make a difference, but generally speaking, as long as your civ’s number is higher than the horde’s, you’re all good. Armies clash once every few minutes until one side has been reduced to 0.

All in all, what I’ve experienced so far leads me to believe that the Civ formula has strong potential to translate well for the Facebook space. The timing based nature of resource gathering will likely be a sticking point for many, as will the microtransactions to buy Civ Bucks to accelerate the process if desired. That being said, there are many interesting twists on the Civ formula present, and it’s easily the deepest experience I’ve had in social gaming to date. I’ll be interested to see how they balance the final product.