You all remember Choplifter? For those of you too young to know any better, Choplifter was a sidescrolling helicopter combat game where you had to defeat the bad guys and save hostages along the way. Well, Choplifter is getting a retro revival thanks to inXile Entertainment. They’re bringing that familiar helicopter combat of the past to the HD-loving audience of today for the PC, PlayStation Network and as of today we can announce that it will also be hitting Xbox Live Arcade.

inXile let me play through a couple of levels in Choplifter HD where I killed plenty of terrorists, zombies, chickens and … Super Meat Boy?! 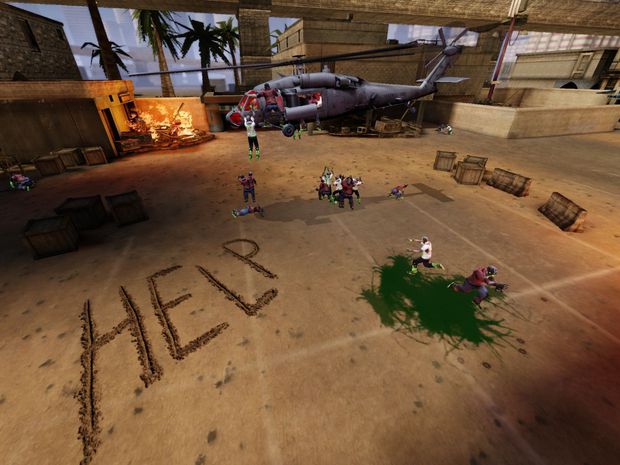 You’ll be in control of various helicopters as you go about saving the day. Levels are all designed in 3D but you’ll be flying in a 2D perspective, just like the original game. In the first level I saw, you’re in the middle of a war in some foreign, desert-y country and the goal is to destroy the oil pipelines at the end of the map.

There’s plenty of armed resistance along the way but your helicopter is armed with a machine gun — one with unlimited ammo and missiles. The machine gun does overheat after prolonged use and you have a limited amount of missiles at your disposal. You can also boost and utilize your chopper blades to kill anything. 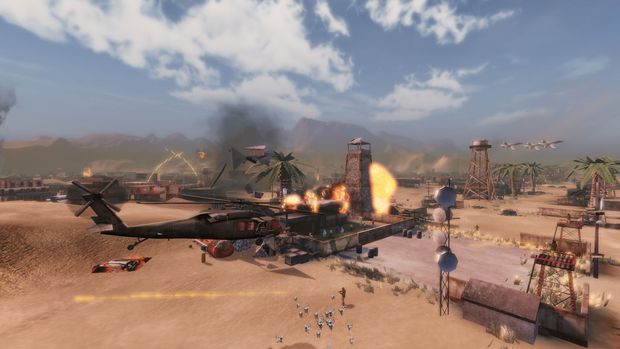 Pressing a button (in this case the Xbox 360 controller’s left and right bumpers) will make your helicopter face right, left or straight at the screen. You’ll need to switch views when engaging enemies as the machine gun has limited range and so you can target enemies easier with missiles.

On top of your chopper’s health meter, you also have a fuel meter to manage, so you have to refuel in order to stay in the air. There are multiple refueling points on any given level and you have to set your chopper on the ground in order to get gas. This leaves you vulnerable, but you can still fire your weapons.

Each level will have a primary objective you need to complete in order to pass, with the secondary goal of saving as many people as possible. Saving someone simply involves you setting your chopper down on the ground smoothly. Really, if you land to hard or fast you will damage your ride. You need to make sure you’ve cleared the area of danger and be careful not to land on anyone in need of rescuing either as that can kill them. There’s a limited amount of room on your ride so you have to make multiple runs back to the starting base in order to drop people off to safety. 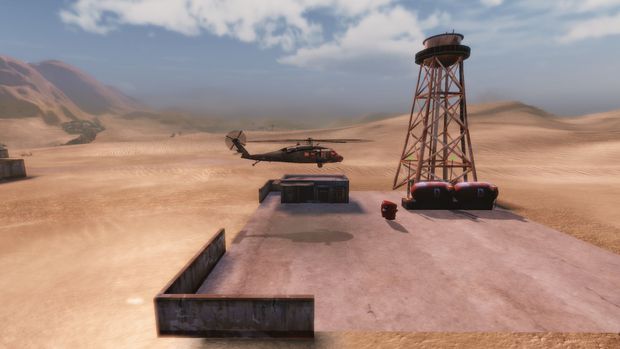 Levels won’t all be as serious as this desert combat scenario. The next stage I was shown was set in the middle of a zombie outbreak. The goal here is to get military soldiers from checkpoint to checkpoint in order to save others from the zombies. There’s obviously no danger from the zombies while you’re in the air, but you do have to make multiple landings and the zombie horde will overcome your firepower and attack the chopper. The zombies will even cling onto your ride and you literally have to swing the helicopter from left to right in order to shake the brain eaters off. It’s a pretty funny site to behold as you fling the zombies back to the ground.

That’s Choplifter HD in a nutshell. It’s pretty straightforward and should really please fans of the original game. In fact, fans will be happy to hear that Dan Gorlin, the creator of the Choplifter franchise, is a design consultant on this game.

The visuals were really good and I was especially impressed by the audio design. It was a real blast to play but I definitely hope Choplifter HD also hits the mobile platforms. The levels seem like the perfect length to fill up a boring train ride, for example.

As for Super Meat Boy, inXile has partnered up with a few indie developers and we’ll be seeing special cameos from other games. In this case, Meat Boy can be found by actually going past the particular level’s parameters. You can rescue him … or kill him, like I did. It was totally on accident, I swear.