In our prior coverage of Marvel Heroes, Steven set the stage for the free-to-play MMO. On paper, it all sounds rather good: an action-RPG starring iconic heroes and villains being worked on by Diablo creator David Brevik with a story penned by Brian Michael Bendis (Ultimate Spider-Man). Yes, please!

Conceptually, there is so much potential here — when we got the opportunity to join the game’s closed beta, I was more than willing to set aside the time to play Marvel Heroes. Execution is another matter, especially for an honest-to-goodness beta such as this. While I remain hopeful about this project even as someone who isn’t that into comics, there are some concerns I’d love to see addressed before the to-be-announced full release happens. 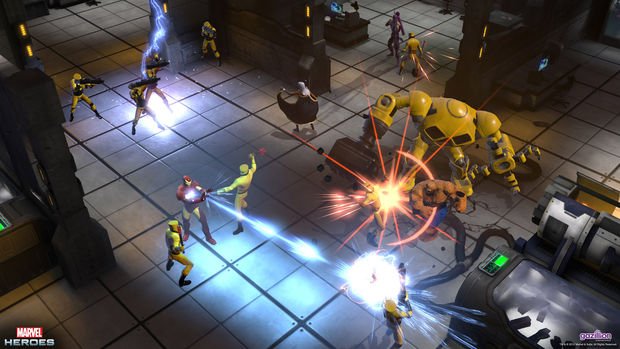 Since the obligatory tie to Diablo has already been mentioned, I’ll attempt to not bring that series up again. It is, however, an entirely warranted comparison. Fans of action-RPGs will feel right at home with Marvel Heroes, from its overhead view to its colored loot to its health and spirit meters. This specific approach to the genre has not yet outstayed its welcome, but there has been iteration in the past few years to keep things somewhat fresh.

Unfortunately, Marvel Heroes does little if anything to build upon the foundation. While this might not be a major problem for all of you — particularly in the context of the game’s price, or lack thereof — I’m surely not alone in only being able to handle so many of these titles in a given year. Based on my closed-beta experience, the vast majority of your time here will be spent wandering around, clicking on enemies until they keel over, and occasionally picking up promising-looking loot. Well, yeah. Of course.

This would be perfectly acceptable if the game’s environments weren’t so bland and lifeless, the enemies were significantly more varied in appearance and attack patterns, and the loot itself was cosmetic rather than merely serving as an equippable bundle of stats. Thankfully, those first two complaints were to some extent addressed as I got further into the beta. Fighting street thugs in a dreary take on Hell’s Kitchen got old, fast, but taking down ninja members of The Hand on the Southeast Asian island of Madripoor was far more interesting. 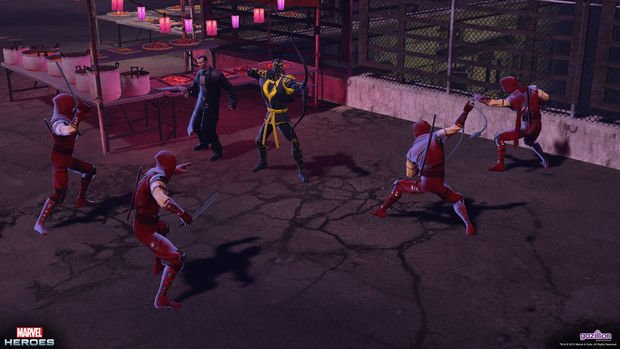 With moment-to-moment combat that, in my experience as The Punisher, generally came down to using my primary attack (i.e., left clicking) almost exclusively for its pure damage-per-second output, the onus was on the environments and enemies to be engaging. As one would expect, Marvel Heroes does make use of skill trees, but the implementation here was said to be an early prototype. My Frank Castle could use a rocket launcher, or kick foes back when they got too close, or whip out a shotgun for crowd control, but it was his basic rifle attack — not an actual power — that ended up being most effective.

While he was my main character, we were given enough funds to check out the in-game shop where players can purchase more heroes (I went with Iron Man and the Hulk) in addition to alternate costumes. That’s where the free-to-play aspect comes in and why loot you pick up has no bearing on your appearance. Which is not entirely unreasonable, all told; they have to make money somehow. In the brief time spent with these other two characters, I did get the sense that their respective powers were more differentiated and useful than the Punisher’s, for what it’s worth.

Once you have multiple characters, you can swap between them anywhere (provided you aren’t hit by an attack during the brief transfer time). They start off at level one, however, so I wasn’t terribly interested in catching Iron Man or the Hulk up to my main by replaying the unexciting introductory levels. Not for the purposes of this preview, anyway. Regrettably, the times when the servers were up and Marvel Heroes was playable as an MMO clashed with my bizarre schedule more often than not; perhaps I would have had more fun rolling through Hell’s Kitchen or fighting untold Hydra members a second time with some partners. That’s usually the case. There are randomized boss encounters (such as Electro, early on) designed to require teamwork, and that’s where the game could really shine. 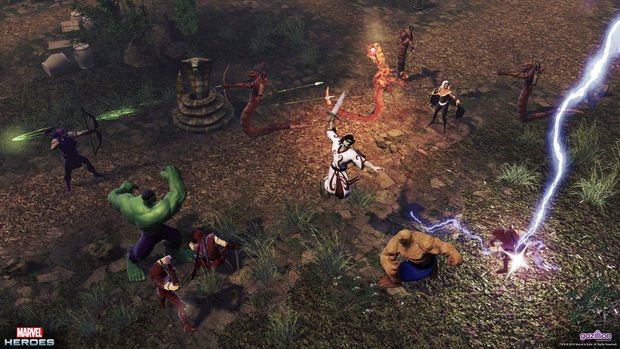 It’s difficult to know exactly how much work on Marvel Heroes remains. As it stands, the game is something I wouldn’t mind playing for a few hours given its free nature, but certainly not much more. We were told that, specifically, the costume system and skill trees were works-in-progress, with plans for the latter to be greatly expanded upon. Fleshing out those two major elements would certainly go a long way in bringing me back on board.

The real driving force here is unsurprisingly the huge catalog of characters available to Gazillion and Secret Identity Studios, both in terms of overall narrative (which is told through voiced motion comics) and the heroes you’re able to play as. On some level, it’s just plain cool to see some of these familiar and not-so-familiar faces show up — but it isn’t enough to carry the game alone. Watching a video dropped by a slain foe in which the Taskmaster tries to recruit criminal scum for his institute was genuinely fun. I wish the same held true for the combat itself.

For as much criticism as I’ve presented here, Marvel Heroes is still something I’ll watch very closely as further patches roll in. As is, this will be worth checking out for Marvel fans, but I’m done giving games a free pass simply because they don’t cost anything up front. They do cost something — the time and energy we put into them. With additional development time (again, we don’t even have a rough release date), I’m confident this could be the game its highly promising premise deserves. Until then, I recommend joining me in keeping up with Marvel Heroes‘ progress.