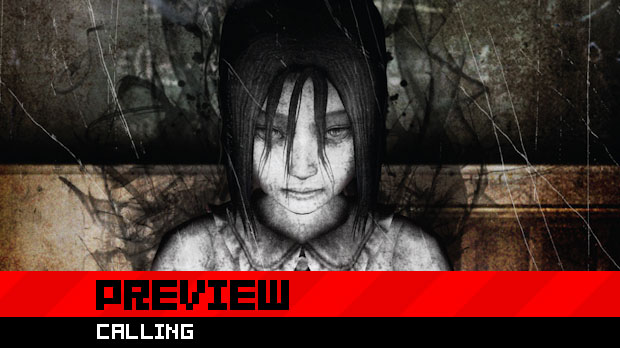 Japanese horror games love the Wii. For some reason, the family-friendly console has been a virtual Mecca for survival horror games and quirky fright-fests such as Silent Hill: Shattered Memories, Fatal Frame: Mask of the Lunar Eclipse, and Ju-On: The Grudge. The latest game to join the flock is Calling, a first-person scare-em-up told from the perspective of four different characters.

Having played a demo version of the game and enjoyed such classic Japanese tropes as fightening dolls and scary little girls, I can safely say that Calling is quite a cool little novelty, even if its scares and gimmicks are corny as Hell. In fact, the high cheese factor may be Calling‘s most redeeming feature.

Read on for the full story.

The demo starts off with a mass of instructions about holding the Wii remote to your head like a telephone. The big gimmick with Calling is the fact that it uses the remote’s built-in speaker to communicate with players as if they’re on a cellphone. As you might expect, spooky distorted messages come out of the remote and directly into your ear. Incredibly gimmicky, yet undeniably cool.

Just make sure you don’t hold it to your head during the opening “cutscene” as I did, expecting something to happen. I sat for what felt like an age with that plastic thing stuck to my ear, watching the most boring intro I’ve ever seen in a game. The game’s premise is set up through a chat log between various characters who have entered “The Black Page” — a mysterious Web site rumored to help people talk to the dead. The intro consisted of masses of text appearing on the screen, accompanied only by the sound of keyboard typing. Very boring start.

Eventually, the game itself begins. The chapter on the demo is called “Possession”. It starts with a girl named Rin Kagura suddenly waking up in an unfamiliar room. Again, there are masses of text as the game explains its controls — The nunchuck stick moves the character around, the Z button is to run, the Wii remote is for looking around, and the A button is for interaction. Simple enough stuff, although the game takes an age to explain it all.

The first task is simply to wander around the room and look at stuff. When clicking on an item, players enter “Investigation mode,” where they get a closer look at the surroundings and can play around with items, in a manner similar to Hotel Dusk on the DS. Doors can be opened by holding the A button and swinging the Wiimote left or right. Some objects can be held for closer investigation, and rotated in all directions so the player can find new clues.

After a while, the cellphone on the desk next to the bed rung and I had to pick it up. Pressing the minus button on the Wiimote activates the cellphone, and this is finally where I finally got to hold the remote to my head like a moron. A static-filled, ghostly warning echoed through the remote. Predictable, but fun. Now I could leave the room.

I found my way to the toilet but was told things were too dark for the character to see. As I looked up, a ghostly face suddenly flashed in the bathroom window, like that bit in The Exorcism of Emily Rose. The frights in this game are incredibly schlocky and trite, but they work. The kind of cheap scares that make you jump at first, then laugh.

My travels took me to a locked door with very little else to do. Unable to go further, I turned around and found myself staring right in the face of a ghost! The ghost grabbed me and I had to shake the remote to lose him. Unfortunately, what started as a surprising and scary moment was ruined by yet another tutorial telling me to waggle the remote and hit A to shake the ghost loose. Never mind the fact that the in-game prompts were enough to tell me that and that the spooky immersion had just been thoroughly broken. Oh well.

The in-game health is known as the “Horror Meter,” a rather well-worn horror game device that acts exactly like a health meter but determines how scared the character is. Obviously if the horror becomes too great, they die.

With the ghost shaken, the door was now unlocked. After picking up a flashlight (turned on and off using the D-pad), I was able to investigate dark rooms. At the end of the room was a pair of sliding doors. I tried opening them a little, but they would only go so far. Some stuff then fell from a shelf for no reason other than to be creepy. Wiith the doors open to show a mere crack, I was told to enter “peek” mode. In this mode, you look around with the nunchuck stick and move the flashlight with the Wiimote in order to get a closer look at the insides of a room. I peeked inside the room and saw a dead body. The main character then shouted “OH” in the most hilariously forced exclamation of surprise I’ve heard in a game.

With very little else to peek at, I turned around to investigate the room. Nothing but dolls on the floor. I turned back around to the sliding doors and found myself staring at a gang of giggling, evil little dolls that were all peering out of the door at me. I must confess that this made me jump, despite its silliness. Now I had to leave the room, quickly. I bolted for the exit, but the door was barred shut. In this instance, you grip the door handle with A and then shake the remote over and over until it comes free. Success!

I ran into the corridor and was grabbed by a ghost again. Shake shake shake, eventual freedom. Made my way back to the bedroom I started in, where I was safe. A telephone in the room started to ring. No choice but to pick it up. A scary little girl was, naturally, on the other end. She simply said “Gotcha” and I was treated to a cutscene of Rin getting grabbed by shadowy hands. End of demo.

Aside from the boring tutorials and the fact that the controls feel a little loose, Calling looks like a promisingly fun little game. The scares are so cheap and silly, but that’s part of the charm. It’s a classic Japanese horror game that doesn’t apologize for throwing cliches at you. The idea of using the Wiimote like a cellphone is incredibly gimmicky, but again that is all part of the fun. It seems that Calling will be a perfect game for people who want some easy thrills and a good laugh at the expense of some silly horror tropes. Nothing to be taken too seriously, but still able to give you a few good scares for your money.

Calling is released this March and should be a good chuckle.