“I can objectively say that it’s the best game Treyarch’s ever made, period,” claimed Josh Olin, the studio’s community manager, referring to Call of Duty: Black Ops at a recent Activision press event in New York. This was after he showed live gameplay demos of two missions from the campaign of the upcoming Cold War-era first-person shooter, and although I really enjoyed 2004’s Spider-Man 2, I’m inclined to believe him.

In the wake of the veritable dissolution of Infinity Ward — the developer behind the phenomenally successful Modern Warfare games — Treyarch is in a unique position, poised to usurp the throne of ‘marquee Call of Duty developer.’ From what I’ve seen of Black Ops, they’re well on their way. 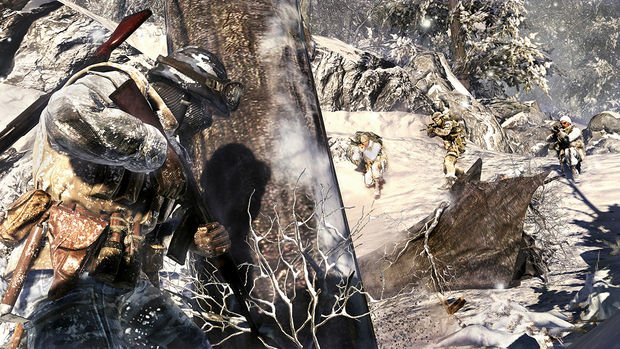 The demo started with a mission called “Victor Charlie,” in which you’re part of an elite group of soldiers investigating potential Soviet involvement in the area of Vietnam’s Huong River. Not wanting to give away too much about the story, he wouldn’t specify a time frame. The mission opened with muffled cries of alarm, and the player’s blurred vision slowly focused on the cockpit of a downed helicopter inside which the water level was rapidly rising. As if that weren’t bad enough, gunfire shattered the windshield, and within moments, the vehicle plunged into the river.

Playing as a character named Mason, Olin wrenched open a door and swam out while more bullets pierced the surface of the water. He made his way to a boat, where he surprised a Vietnamese soldier from behind, taking control of his gun and drawing fire to his newly acquired human shield. Then he took careful aim at the head of the last standing enemy and fired, and the first-person camera switched to a cinematic angle that followed the bullet in slow motion as it entered Victor Charlie’s forehead. The moment stood out to me, and not necessarily in a good way — it certainly looked cool, but it was a stark contrast to the tone of the rest of what I saw. 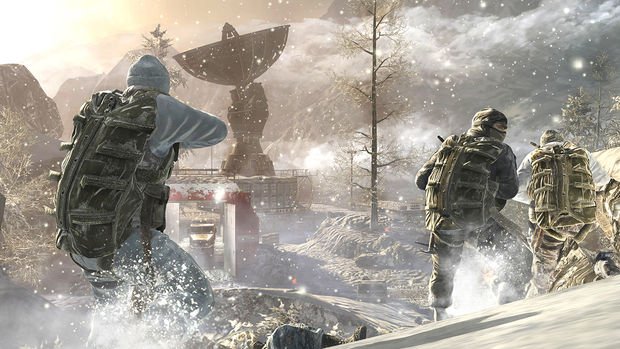 Modern Warfare 2 was certainly a serious game, but it entertained players with bombastic spectacle. Black Ops generally doesn’t celebrate war; instead, since you play as the Military Assistance Command, Vietnam – Studies and Observations Group — a US special operations unit — it presents a more brutal, improvisational, accomplish-your-objectives-by-the-seat-of-your-pants picture of the Vietnam conflict. Don’t get me wrong — this is a Call of Duty game, and when Olin rained down rockets from a helicopter, the blistering explosions reminded me of Apocalypse Now and its gung-ho Lt. Col. Kilgore. But the significant stealth aspect of Black Ops means that much of the combat is more up close and personal, and there’s simply nothing pretty or glorious about the vicious, anything-goes guerrilla tactics that you and your enemies use against each other.

After the cinematic kill, Olin skipped ahead to avoid spoiling the story, and came to a sequence where his AI leader handed him some Semtex — a brand-new plastic explosive in 1964 — to plant on the foundations of a hut, so the group would have a distraction before an assault on a village. Mason set the explosive and then climbed into a hut, where he stabbed a sleeping Vietnamese soldier and slit the throat of another guard. Next, he rejoined his teammates outside the village. They detonated the Semtex, and then engaged the Vietcong in the area. Upon clearing the village, they headed toward a dock where an anti-air gun sat in a reinforced setup. Using a grenade launcher, Mason made quick work of the gun and everything around it.

The next segment of the mission exemplified the gritty, brutish nature of the Vietnam War. Mason’s squad came upon a tunnel whose entrance was covered by some forest undergrowth. Once they tossed in a grenade to clear out the Vietcong inside, Mason and a teammate climbed down into the tunnel. (Treyarch showed this part of the mission at Microsoft’s E3 press conference.) They crawled past the maimed corpses of the men they had just blown up, while rats scurried past them. Water seeped in from the sides and dripped from the ceiling of the dank tunnel, as Mason shined a flashlight for his buddy ahead of him. Just as the soldier turned a corner, a Vietcong soldier stabbed him before Mason could do a thing; after killing the enemy, Mason had to simply forge ahead past the lifeless body of his squadmate. 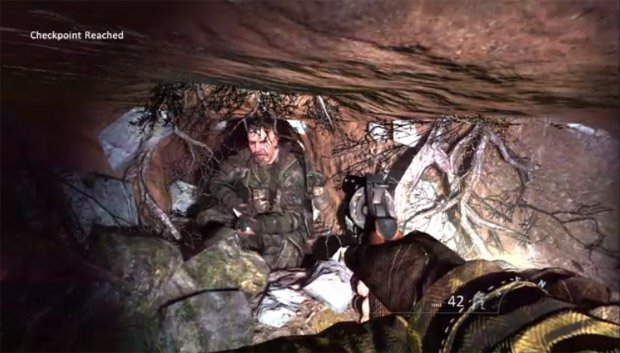 At a fork, someone jumped into the tunnel; a shocked Mason almost fired on instinct before realizing it was Reznov, a comrade whom you will recognize from the studio’s previous Call of Duty game, 2008’s World at War. “Reznov! You nearly took a bullet,” exclaimed Mason — yes, the playable characters actually speak in this game. A few moments later, Reznov wrestled savagely with an enemy in a puddle before stabbing him; I thought to myself, “This Reznov guy is a bad dude.” He then told Mason to go forward, saying that he would flank the enemy. Further ahead, the tunnel opened into a pitch-black room; as soon as Mason and his flashlight beam turned the corner, bullets streamed toward him from the darkness. He returned fire, downing a few, before Reznov took out the others from a side tunnel.

Treyarch is promising an “incredible narrative” in Black Ops. Olin acknowledged that the tale told by World at War was rather simple — “good guys, bad guys, try to beat the […] Imperial Japanese Army” — but asserted that this game has a “much more complicated and deep story.” He explained the setting by pointing out that the covert group you play as in Black Ops isn’t fighting the war itself; that’s a job for the common soldiers. “You’re actually on a specific mission […] that furthers our fictional plot,” said Olin, saying that Treyarch is “weaving [the narrative] through reference points in time.”

One of the ways in which they’re improving their storytelling is through full performance capture, a technique in which a motion-capture actor’s face is tracked along with his body. It allows Treyarch to bring much more emotion into the game by providing more realistic facial expressions. The second mission that Olin showed me, “Payback,” featured an escape from imprisonment. Mason was joined this time by a soldier named Woods, and in the section I saw, the two came upon a camp with a Hind helicopter. Woods turned to Mason and declared, “You see that Hind? I’m gonna take it!” What struck me wasn’t his daring boast. Instead, I noticed that his eyes were narrowed, his brow was furrowed, and he kept looking around nervously; I’d describe his temperament as “crazed.” Perhaps his time in captivity made him that way. 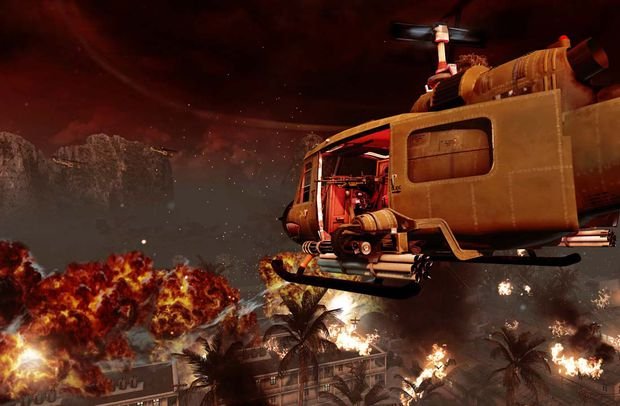 Black Ops looks to be another high-octane blockbuster entry in the Call of Duty franchise, but its dark undertones suggest to me a somber gravity that I didn’t find in the Modern Warfare games. If Treyarch keeps up that tone throughout the whole story, this might be the most mature Call of Duty game yet.