I am not usually a fan of hunting games. Of course, shooting things is usually a fun activity, but not so much when the things you are shooting don’t put up a fight.

I’m always up for new twists on worn-out tropes though, so I was excited when I found out that Cabela’s Dangerous Hunts 2011 was promising to take the hunting game genre in a new direction by adding in horror survival elements. My first thought when I heard this was, “so we’re going to be shooting zombie deer while they try to gouge out your face with their horns?”

Well first things first, there are no zombie deer. I asked. Twice. There are no zombies at all, but the game does feel a bit like Resident Evil with wolves and more ammo. The story, written by Brad Santos, revolves around a young hunter and his dad who go off on an epic hunting expedition that goes south pretty fast. I mean, someone gets mauled by a giant furry beastie in the opening scene, so it’s pretty clear from the start that this is no average hunting game.

What I saw of the story seemed interesting, and basically revolves around how crazy your dad is. I mean, this dude is really crazy. He makes you eat the heart of an animal you kill. Raw. Mmmmm, tasty! Later on you go on a safari to Africa with him, which is where most of the story takes place, but I did not get to see past the first few levels which take place in some snowy mountains. 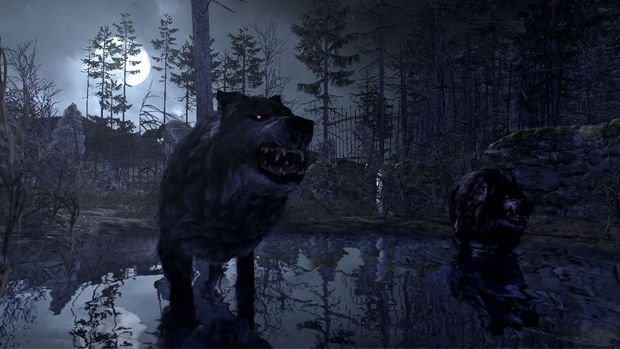 The beginning of story mode is a basic tutorial on how to shoot. The Top Shot Elite controller takes a bit of getting used to, especially considering how sensitive it is on the PlayStation 3, so for once I actually appreciated a tutorial. Lemme tell you, shooting apples off a tree is not as easy as it sounds when every little bit of motion changes the angle of the screen. The PS3 version is still being worked on, so we were told that it would be less sensitive in the final version. In any case, the sensitivity really adds to the horror-survival elements as you have to keep totally calm while wild animals lunge at your throat or the screen starts looking as freaked out as you are.

The mix of horror/survival elements in story mode and survival mode is a refreshing addition to a worn out genre. Animals jump out of nowhere, and they seem to have a pretty decent AI. I actually jumped in the Full Moon level when a flock of birds flew out of the woods because I was convinced they were a giant bear about to maul me. The animals are scary, and you are shooting them not for sport but to survive. But now, it’s time to go on your first real mission in the game: an elk hunt! 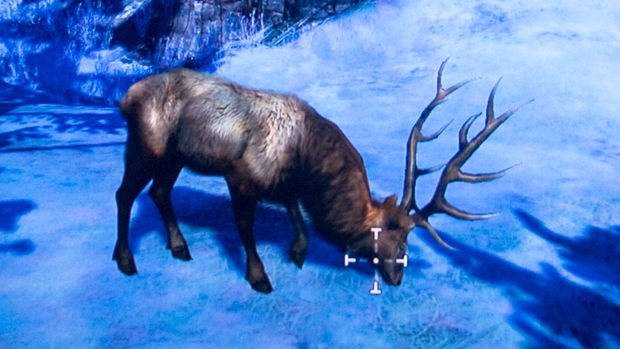 See that elk? Yeah, I’m about to shoot it at point-blank range in the head with a sniper rifle. 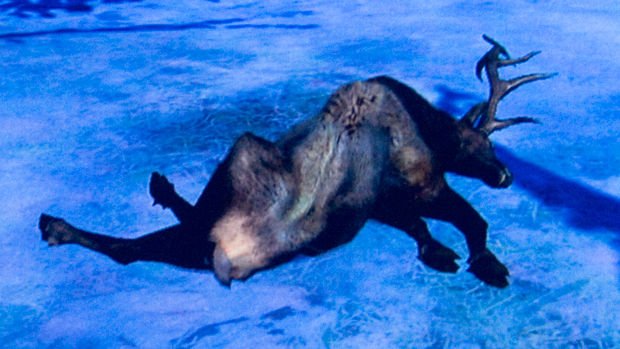 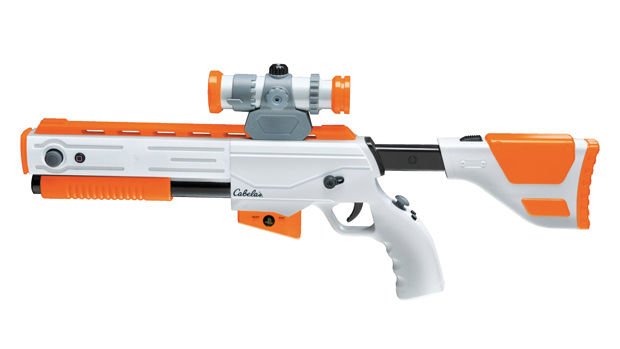 The controller itself is incredibly fun to play with. For the Xbox 360 and PS3 versions, which were the ones I got to play on, you get a sensor bar to stick to the bottom of the screen (kind of like the Wii’s sensor bar). Only it’s sleek and black and sexy-looking. For the Wii version you can pop your Wii Remote and Nunchuk in, which makes it cheaper but less fun since the PS3 and Xbox 360 versions have buttons in the perfect spots, and are much easier to get the hang of.

The motion sensor works surprisingly smoothly, with no lag between my motion and the motion of the screen. Forward and backwards motion is controlled with the analog stick, but going/looking sideways is controlled by the Top Shot Elite. Simply tilting it a bit to the side causes you to spin around, so you have to be really aware of every little motion you make. It seems tedious at first, but after a few minutes it became almost second nature.

Probably the niftiest feature of the Top Shot Elite is the infrared scope that you can use to track animal prints or blood trails. Combined with the fact that you have to physically reload the gun, it feels a lot more realistic than some shooters. I’d love to see this used with other games like Call of Duty, as it has a lot of potential for really improving how people play first-person shooters. 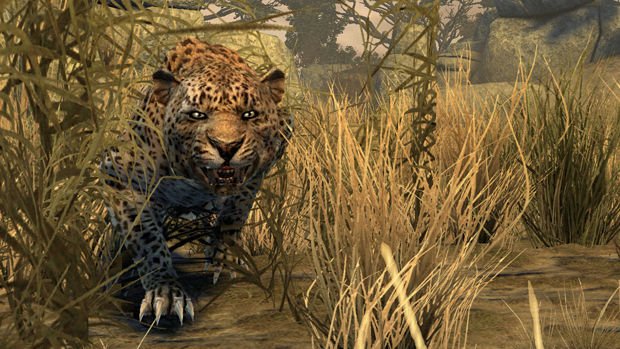 Of course there are modes besides story, so if you want something a bit faster-paced there is a shooting gallery and a survival mode. Both are multiplayer and up to 4 people can play at once. For both of these there is no split-screen, which is a huge bonus for me. I hate split-screens, and find them distracting and obnoxious. Playing on the same screen as other people is a much more immersive experience.

The shooting gallery is pretty standard fare, although it is much faster-paced than your average hunting game. You play for points either by yourself or with other people. Animals run by, you shoot them. However, you have to switch between weapons depending on what animals you are aiming for (points are deducted if you get it wrong), which adds a strategic element. 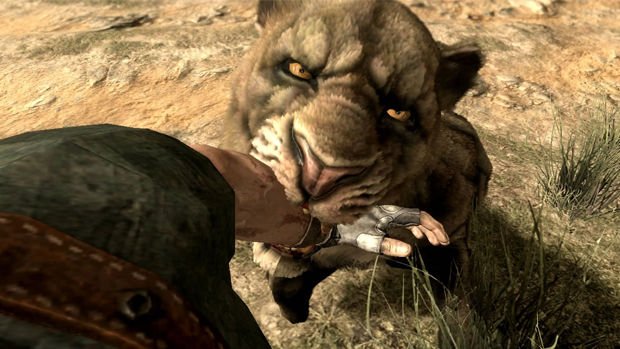 For me, the survival mode was the most enjoyable. In survival mode you are… well, trying to survive. There is no set “end” to levels, you just play for as long as you can until some wild animal inevitably kills you. I am kind of a terrible shot (my aim is atrocious) so I lost three out of four rounds to my photographer, but I found myself enjoying it anyway. In fact, I wasn’t even paying attention to the points. I think I was too busy trying to shoot the giant baboons to care about winning or losing, and I am usually pretty damn competitive. You know a game is fun when it’s so immersive that you forget you are in a competition in the first place.

I never thought I would walk out really looking forward to this game, but I honestly am now and I look forward to playing more of it when Cabela’s Dangerous Hunts 2011 is released!