“It’s been in my head for at least 15 years,” designer Tim Schafer tells us of Double Fine’s upcoming PlayStation 3 and Xbox 360 game, Brütal Legend.

“I wanted to do a game that played off of the fantasy and the images from heavy metal music,” he continues, “all of the music that I loved, starting back from when I first bought [Ozzy Osbourne’s] Diary of a Madman.”

You can almost picture a young Schafer, poring over the artwork, liner notes, and lyrics of his favorite Judas Priest and Iron Maiden albums. It’s these heavy metal worlds and their evocative imagery that inspired Schafer to begin work on the game in 2005, right before production of Psychonauts wrapped.

“It was always sort of one guy standing in the middle of an empty church with a plastic sword,” he says of heavy metal music videos’ low-budget visuals. “I just wanted to do it right.”

Last week, we had a chance to head to Double Fine to get a first look at a demo of Brütal Legend. Based on what we saw, doing it “right” is an understatment. The world of heavy metal music has really never been brought to life quite like what’s poured out of the heads of Tim Schafer and company.

Brütal Legend is the story of Eddie Riggs (voiced by Jack Black), the world’s greatest roadie. A heavy metal MacGyver, Eddie can rig any stage or tune any guitar at a moment’s notice. He’s an encyclopedia of all things rock, living the heavy metal lifestyle of excess on the road with … one of the worst heavy metal bands of all time. When an accident leaves Eddie’s blood dripping into the his belt buckle (the face of Ormagöden, “The FireBeast, Creamator of the Sky, Destroyer of the Ancient World,” of course) he’s whisked away to an ancient world of metal, seemingly ripped from the cover of an Iron Maiden record.

It’s here that the game begins, with Eddie plopped into the middle of an extraordinary yet familiar land, one that embodies the tenets and fantasy of heavy metal and its imagery. The game’s first set-piece, a temple that looks like a rock n’ roll concert stage come to life, puts Eddie in the company of mysterious, shroud-wearing druids.

“The day has finally come for us to serve our master,” one says, within earshot of Eddie.

There’s no doubt about that, as the druids turn their attention to Eddie, and the game’s first battle begins. With swords drawn, the druids approach Eddie, who, stumbling around, comes across his first weapon: a broad-axe called The Separator. Despite the fact that he’s never wielded the weapon before, it comes as second nature to Eddie, who swings the blade like a pro, decapitating his attackers as they approach. Along for the ride is Eddie’s guitar, Clementine; a plain old guitar in the “real world,” the instrument becomes a mystical wand of devastation in this world of heavy metal. 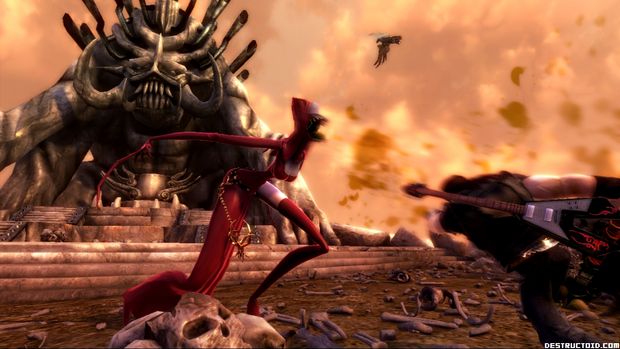 The combination of The Separator and Clementine is the basis for the game’s third-person hack-and-slash sequences. While the axe can be used for close-encounter melee attacks, Clementine is a different beast, and can be used in combination with the axe; Schafer likens its abilities to a “traveling rock show.” By tapping X, Eddie makes Clementine shoot lighting at enemies; by holding the button, the six-string can shoot enemies into the sky like rock concert pyrotechnics. Other abilities like the devastating area-damage “Earthshaker” — a strong power chord that will send enemies flying through the air or knock things loose from the environment — can be unlocked throughout the game as well.

According to Schafer, one of the driving visual themes of Brütal Legend was that everything can (and should) look like the cover of a heavy metal album. Schafer lists a few examples, like surgical equipment or a nun who’s also a demon. This stuff doesn’t have to make any kind of real-world sense; it’s already been dictated by the imagery of heavy metal, and therefore transcends common sense. It also makes for some badass environments and enemies, all of which should not only click with gamers who are fans of heavy metal, but with Eddie as well.

“I’m supposed to think you’re a nun,” he says in an early encounter with a tall and thin female enemy, “but I know you’re some kind of big ugly demon, so let’s have it.”

Of course, Eddie is right; the demon pulls back her veil to reveal a face that just appears to be a mouth of razor-sharp teeth.

Amidst a battle with demon nuns, Eddie runs into Brütal Legend’s love interest, Ophelia. She pulls back a cloak to reveal herself as a gorgeous young girl, much to Eddie’s surprise.

“I hope I haven’t been killing hot chicks this whole time,” he says, a comical one-liner delivered by Jack Black in earnest. 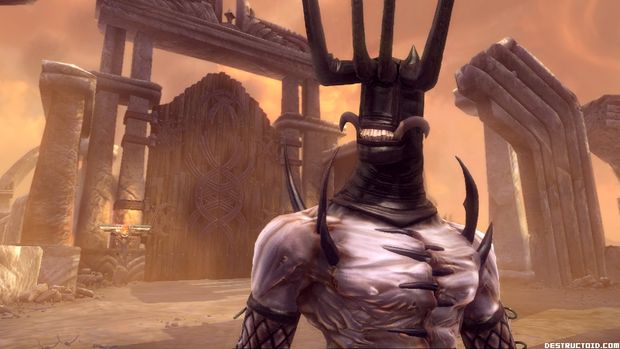 While the game’s intro is linear, Brütal Legend is certainly not, giving players 64 square kilometers to openly explore. Yes, Brütal Legend is a heavy metal record turned into a sandbox game. With so much ground to cover, Eddie fortunately has a vehicle to rely on: The Deuce, a.k.a. “The Druid Plow.” Fully upgradable with extra armor and weapons, The Deuce is Eddie’s trusty steed, transport that can be summoned from almost anywhere in the game’s world.

Eventually, Ophelia explains a few things to Eddie — mainly, that the world he’s been transported to is ruled by an evil demon, Emperor Doviculous. The fiend has been enslaving humans, along with the help of turncoat human General Lionwhyte, voiced in-game by the remarkable Rob Halford of Judas Priest fame. The human resistance — led by Lars Halford, a pretty-boy, blonde-maned rocker-type — is ready to fight but lacks one thing: organization.

“An army needs food, shelter, transportation … so many details to manage,” laments Ophelia.

It’s then that Eddie realizes his purpose: “It sounds like you need a roadie.”

While Lars is charismatic and a natural-born leader, the perfect “frontman” for both a heavy metal group and an army, Eddie’s expertise is exactly what they’ve been lacking. This leads right into one of the game’s most surprising mechanics — the ability to control, command, and lead a small army of headbangers (known as Ironleade) to topple Doviculous and his demon army.

Like most open-world titles, Brütal Legend is broken up into missions. Lars tells Eddie of a mine full of humans enslaved by Doviculous, sentenced to endlessly break rocks with their own thick skulls. Although they’re potential candidates for Lars’ army, he’s not exactly sure how to best utilize them.

“What do you do with a bunch of kids that don’t know how to do anything but bang their heads all day long?”

The answer is “Start a Revolution,” one of Eddie’s first tasks, and the in-game tutorial for commanding a heavy metal army of headbangers. The mine is packed with these dudes, mindless drones endlessly smashing their skulls against rocks, motivated by statues of General Lionwhyte that intermittently emit motivational phrases. (There’s nothing quite like hearing the voice of Rob Halford shrieking “Teaaaaaaaaaam work!” or “Doooooo it!”) 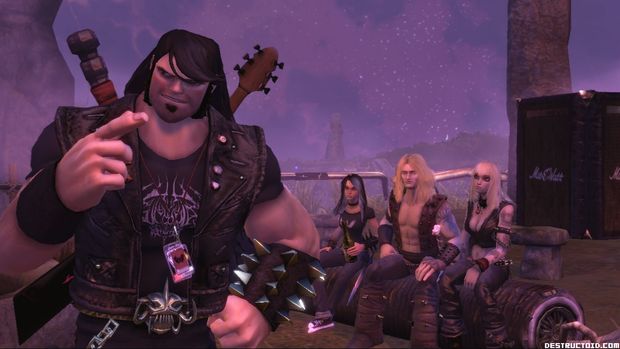 By using the D-pad, players can call the headbangers to arms with the power of metal, rallying the troops to have them fight by your side. Using other D-pad commands, the headbangers can be asked to stay put, move to a specified area, or to fight by your side. We watched Eddie fight alongside the army, hacking apart demons and traitor humans with The Separator and electrifying groups with the power of Clementine.

This squad mechanic isn’t unique to games (think Rainbow Six, for instance), but it is relatively unique for a sandbox game. And given Schafer’s unique perspective on various gaming styles, it’ll be interesting to see in what ways it’ll be utilized as the war in the world of Brütal Legend comes to a head. Of course, it’s no surprise that Double Fine look to keep the gameplay fresh throughout Brütal Legend, with various mission types and challenges. One early boss battle we saw took place almost entirely inside The Deuce, with Eddie using the plow to evade a terrifying lamprey monster, a battle ending in a severed tongue and significant carnage.

While Electronic Arts and Double Fine don’t want us talking about the music just yet (things like licensing still need to be squared away), given the game’s theme, it will obviously play a huge role in Brütal Legend. Fans of metal will likely immediately feel at home, with both classic tracks and newer metal hand-picked by the team at Double Fine. In one instance, we heard an amazing orchestrated version of a classic early-80s rock single, which seamlessly transitioned into the licensed recording as a battle began.

Sure, Brütal Legend is an ode to heavy metal, a love letter written in the form of a game designed by a man with a passion for the genre. But imaginative gameplay and predictably spot-on dialogue written by Schafer himself should entertain, regardless of your musical tastes. After all, you didn’t have to be a pirate to recognize the genius of Monkey Island, or know how to ride a motorcycle to appreciate Full Throttle.

But hey, picking up a copy of Iron Maiden’s Seventh Son of the Seventh Son before Brütal Legend‘s release can’t hurt, right?