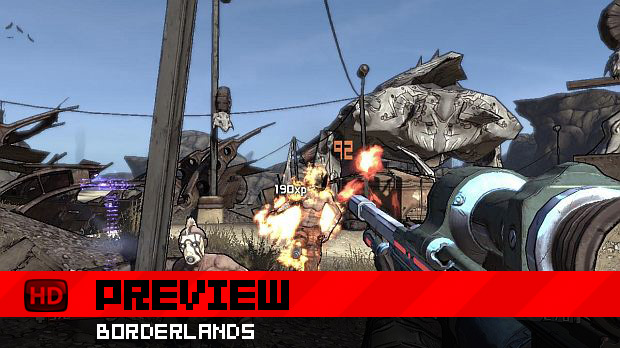 It’s a funny thing, Borderlands. While excitement arose during its initial 2007 announcement, it was the cel-shaded graphics that brought the game the most attention. After that, however, Borderlands sort of fell off the radar, becoming a game many people were not even thinking about, much less actively wanting to play. With games like Fallout 3 and Call of Duty 4 doing the whole shooter/RPG thing passably, it almost seemed like Borderlands was going to be late to the party.

Then, of course, Gearbox Software, complete with Samba de Amigo and Brothers in Arms: Hell’s Highway, became ready to settle down and focus on Borderlands. This is when all the attention came rushing back, with outlandish claims of millions of weapons, dashing cel-shading design, and a little something about apples. Interesting game, to be sure.

As I’m sure you’ve heard, Borderlands is an attempt to mash-up the FPS and the RPG genres, much like Fallout 3 last year. However, Borderlands is also trying to toss in the co-op of Left 4 Dead, the team-based role assignments of high-level WoW gameplay, the random loot drops and dungeon designs of Diablo, the controls and gunplay of Call of Duty 4, the twisted sardonic attitude of BioShock, a mildly cartoonish aesthetic and humor largely based off the cyber/steampunk world of Firefly. Damn.

It’s the graphics that are going to first attract your eye, and the bold usage of cel-shading is pretty damn daring. Joss Whedon’s world of Firefly is certainly a major influence, as well as Mad Max, and you can see the influence on the planet of Pandora. Everything is left-over scrap heaps and DIY vehicles and structures, really going far to creating a world where the low and lowly fight to survive. It’s definitively a futuristic western, and while modern tools are strewn about (including obnoxious helper robots and vending machines selling everything from healing items to guns to upgrades, all wrapped up in a sickly-sweet consumerist package), the game is about people surviving in a desert world, with aliens and bandits and the environment doing all that it can to kill you. 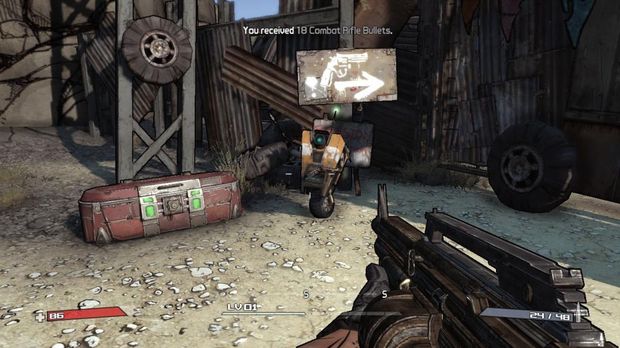 A lot has been said about the cel-shaded graphics, and I’ll give my personal opinion. After five minutes, it’s not noticeable, except for the occasional bold black line highlighting an object. You’re too focused on playing. One great benefit of the cel-shading, however, is that it goes very far toward making the game very clean to work in. Unfortunately, the two areas I played, rusty town Firestone and “The Canyon”, suffered from a lot of rusty red and browns. However, since this game relies so much on desert worlds, having the clean bold outlines really help the player, as well as look nice. While I struggle playing a game like Gears of War, with an enemy or key item practically camouflaged in the background, the cel-shading of Borderlands makes everything very clean and clear. I found that I always knew what, where and who I needed to get to. Unfortunately, there was still some jaggies I found in the game, like in certain background flags, that could use some tightening. But overall, yeah, this game looks hot.

One thing that was really disappointing in the initial areas that I visited, is that there is a major lack of NPCs. The first town had plenty of dudes to shoot, but only one NPC. He’s a doctor who just stands there telling me to get batteries and stuff. Oh, and outside of town is a crotchety blind guy sitting on a porch threatening to shoot you, and there’s a dumb robot helping out out. That’s about it for this beginning area.

Hopefully, later areas are a bit more alive and vibrant, as the lack of NPCs created a feeling of awkward isolation. Sure, one argument could be made that this is a ghost town environment, but it’s hard to believe that when I killed 30 or so bad guys ten minutes in. Enemies, thankfully are proper aliens, with split-faced, dog-like skrags, giant spiders, ax-wielding dwarfs and crazy ‘roided out dudes. It’s properly alien and western, and shooting them in the face is always a treat. 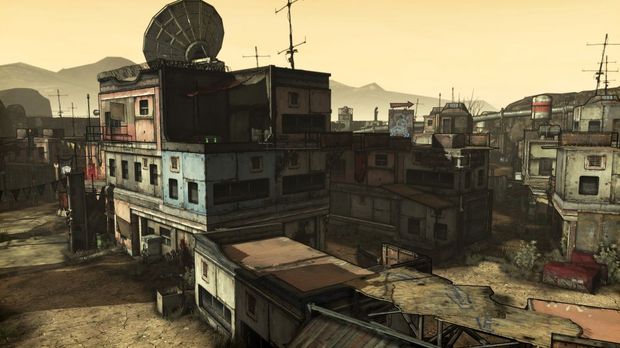 The much touted gun systems seems to be just as expected. There are millions of non-sequitur weapons that you’ll find, some more effective than others, and it’s always neat to see what bizarre weapon will pop out of the next baddie. While I didn’t receive this particular gem, a fellow journalist received a rocket-launching shotgun, and I was jealous.

I asked a Gearbox rep about an option for players to use the gun system like LEGOs, building their own weapons from the ground up, but it looks like this will not be happening. Gearbox doesn’t want people to just build the best weapon that they can, and totally ignore the fun that will be had by random drops. Take it for what it’s worth, alright?

While the first forty minutes of play was the very beginning of single player, as the soldier-class Roland, the last half of play was the four player co-op in a canyon stage about 20 levels higher. We had the options to keep playing as Roland, or we could try out sniper Mordecai, Lilith, the siren assist class, or the brutish Brick. Finding that many of the enemies had a habit of rushing me, I picked Brick.

This is where I had a chance to play with the RPG elements of the game. As you kill enemies (who have both health bars and, for every connected shot, a rising ticker of experience points) and complete objectives you’ll level up. Reach a certain level, and you can assign classes and abilities to your character, with three skill trees. For example, Mordecai can gain better sniping skills or a pet eagle, Lilith can do more stat boosting skills or go invisible. My choice, Brick, can choose trees like “tank” or “berserk”. It’s a fairly straight forward skill progression, and it promises to be a neat bit of customization on your path to maxing your skills out. 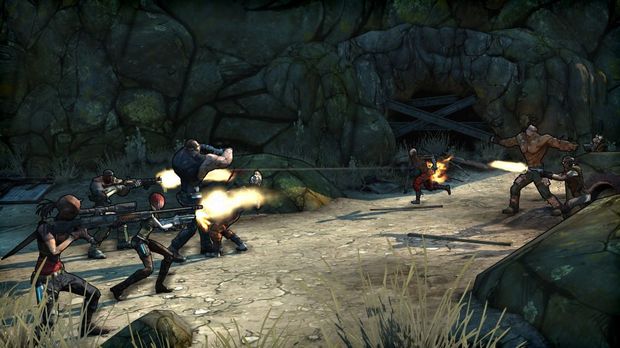 Other things that make Borderlands feel RPG-like is the inclusion of color customizations for your characters, as well as loot drops and the hierarchy of weapon and shield drops. Certain areas are randomized, meaning each playthrough will be at least marginally different.

The actual gunplay seems to be very solid. With the team behind Borderlands having made Brother in Arms: Hell’s Highway and the PC port of Halo, shooting is very solid, with each weapon feeling unique in its quirks. It controls very much like Call of Duty 4, which is a good thing. However, I really wish the reticule speed can be adjusted, as it felt more than a bit chuggy for me. Also, picking up items felt off, as if you aren’t in the exact position to pick up say, that necessary health pack, you enter a long reload animation instead. Then you die.

Co-op multiplayer with four players is not as fast paced as a game like Left 4 Dead, but the team based mechanics, such as using characters for their support, tank (as in MMO), or specialized roles, is encouraged. Health and ammo need to be shared, so cooperation is important. Should you die, you enter a mode much like being knocked down in L4D. If you make a kill from here, you can rise up and gain a health boost. Your partners, too, can pick you up. It seems to take steps to forcing the co-op experience, and with drop-in co-op at anytime, Borderlands offers a lot of flexibility in playing with others. Hell, even versus stuff can be found in the arenas, and starting duels is as simple as both guys melee attacking each other. Standard deathmatch seems to be a little out of the picture, however. 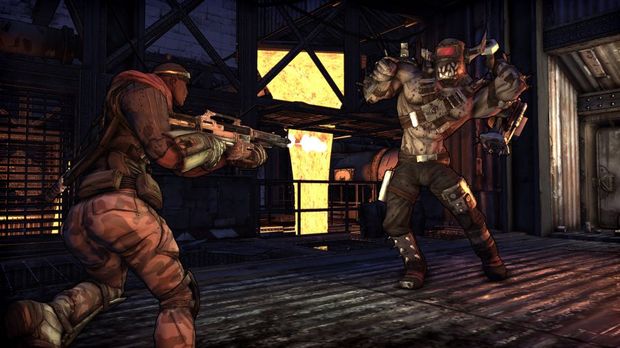 The most interesting portion of the my hands-on with Borderlands isn’t even what I had hands-on with: the DLC. Coming at earliest in early 2010, the really exciting portion of DLC for Borderlands is that they can build on the most popular aspects of the game. If people are really digging the arenas, Dueling and PvP, there will be more DLC devoted to that. If the story elements are most popular, there will be more of that. If the character class system proves to be really popular, and they find room for improvement, there will be new classes to play. Basically, the parts of Borderlands that is most fun, well, that’s what they want to keep working on.

It’s easy to say that Borderlands is trying to do a lot, and the last thing Gearbox needs is a game that is okay as a whole, but mediocre when it comes to the specifics. Thankfully, it looks like Gearbox is really pressing to make sure that each area of the game is outstanding. From very crisp graphics, to the multiplayer heavy story-mode, to the insane amount of guns, to the solid controls, Borderlands should be very interesting to check out once it releases October 20.